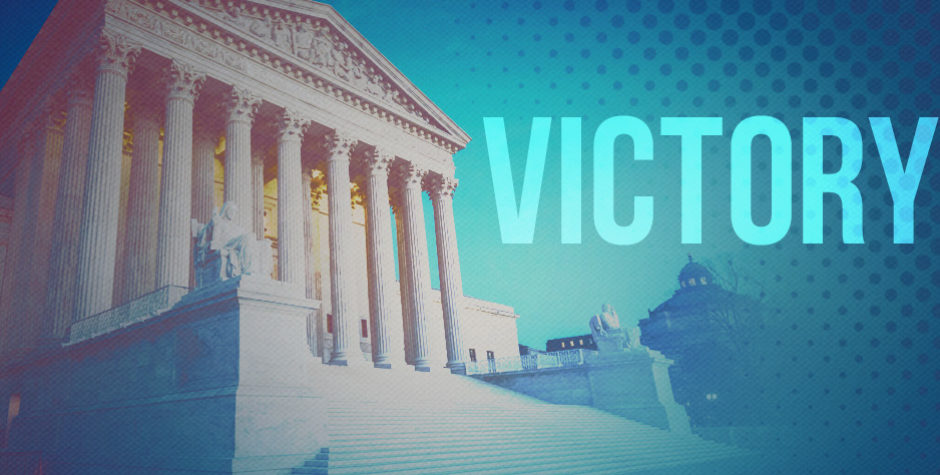 This is a resounding victory for the First Amendment right to free speech and the ability of pregnancy resource centers to fulfill their pro-life mission free from government coercion or interference.

The case, NIFLA v. Becerra, involves the so-called “Reproductive FACT Act,” a bill crafted in part by the National Abortion and Reproductive Rights Action League (NARAL) and passed and signed into law by Governor Jerry Brown in 2015.

The FACT Act requires two things. First, licensed pro-life centers must advertise the availability of free and low-cost abortions by sharing with all their clients the following message:

Second, unlicensed pro-life centers must include in any written ad, and in the same size font (or larger) as the ad text itself, the following disclaimer:

This facility is not licensed as a medical facility by the State of California and has no licensed medical provider who provides or directly supervises the provision of services.

In adopting this law, California ignored decades of Supreme Court decisions that stand for the unequivocal proposition that the government cannot compel private speech without satisfying rigorous judicial scrutiny. As the Court has said time and again: “it is a basic First Amendment principle that freedom of speech prohibits the government from telling people what they must say.”

As explained in more detailed here, we filed suit against the State of California on behalf of three licensed pro-life centers before the law went into effect. As part of that lawsuit, we sought a preliminary injunction, i.e., a court order prohibiting the State from enforcing the law until a final decision is made by the district court on the merits of our case.

After the district court denied our request—a decision that was affirmed by the Ninth Circuit Court of Appeals—we asked the Supreme Court to intervene. We filed a petition with the Court in March 2017 arguing that, contrary to what the Ninth Circuit held, the FACT Act violates the First Amendment’s prohibition against compelled speech.

In November of last year, the Court granted the petition in a similar case to our own, and we filed an amicus brief with the Court on behalf of our clients, once again arguing that the California law is unconstitutional on its face.

As we said in that brief:

A simple examination of who must speak the Act’s message (pro-life centers morally and religiously opposed to abortion); what they must say (advertising and facilitating access to a procedure that they do not provide and find morally repugnant); how they must say it (at the very outset of any communication, prior to their own speech), and to whom they must say it (all potential and actual clients, no matter the reason for their visit), yields only one conclusion: the Act is an impermissible content and viewpoint-based compulsion of speech.

Today, the free speech right of our pro-life clients, as well as other pregnancy care centers, both in California and across the country, has been vindicated.

In an opinion by Justice Clarence Thomas, the Court held that the compulsion of speech by pro-life pregnancy centers could not withstand judicial scrutiny.

First, he noted that the Act is clearly content-based:

The licensed notice is a content-based regulation of speech. By compelling individuals to speak a particular message, such notices “alte[r] the content of [their] speech.” Here, for example, licensed clinics must provide a government-drafted script about the availability of state-sponsored services, as well as contact information for how to obtain them. One of those services is abortion—the very practice that petitioners are devoted to opposing. By requiring petitioners to inform women how they can obtain state-subsidized abortions—at the same time petitioners try to dissuade women from choosing that option— the licensed notice plainly “alters the content” of petitioners’ speech.

And contrary to what the Ninth Circuit held, Justice Thomas did not think that the California law is permissible as a regulation of “professional speech.”  Though the Supreme Court has recognized that some laws “require professionals to disclose factual, noncontroversial information in their ‘commercial speech,’” and that “States may regulate professional conduct, even though that conduct incidentally involves speech,” neither of those two lines of precedents apply in this case.

Indeed, the law doesn’t require licensed centers to inform clients what services they provide, “it requires these clinics to disclose information about state-sponsored services—including abortion, anything but an ‘uncontroversial’ topic.”

The licensed notice at issue here is not an informed-consent requirement or any other regulation of professional conduct. The notice does not facilitate informed consent to a medical procedure. In fact, it is not tied to a procedure at all.

Bottom line, the Supreme Court held today that “California cannot co-opt the licensed facilities to deliver its message for it.”

And the Court did not stop there.  It also held that the law’s compulsion of speech by unlicensed centers likely violates the First Amendment. Noting that California could not meet its burden that “the unlicensed notice is neither unjustified nor unduly burdensome,” Justice Thomas wrote that the law “targets speakers, not speech, and imposes an unduly burdensome disclosure requirement that will chill their protected speech.”

With today’s decision in hand, it is almost certain that our petition will be granted and sent back to the lower courts for a final ruling in our clients’ favor.

And today’s decision will not only directly impact our lawsuit against California, it will also serve as critical precedent in our pending lawsuit against the State of Hawaii. As explained here, after the Ninth Circuit handed down its decision in NIFLA, Hawaii adopted a law substantially similar to California’s. We promptly filed suit and the district court judge stayed proceedings pending the outcome of today’s ruling by the Supreme Court.

While there is certainly cause for celebration over today’s decision, our work in California and Hawaii is not yet over. The Court today ruled that NIFLA was likely to succeed on the merits of its free speech claim for purposes of a preliminary injunction, not a final one. Nonetheless, the Court has given us and the lower courts a clear roadmap to follow in bringing these cases to a final—and successful—resolution.

So long as abortion remains a constitutional “right,” as the Supreme Court has erroneously held, it is critical that pregnancy resource centers be protected to share their message of hope. Thanks to today’s decision, they will be able to continue to do just that.

Today, we won another major victory at the Supreme Court. The Supreme Court just granted our certiorari petition in LivingWell (our case defending pro-life pregnancy centers), vacated the decision of the Ninth Circuit, and sent our case back to the court of appeals “for further consideration in light of National Institute of Family and Life Advocates v. Becerra, 585 U. S. ____ (2018).”

While we were certain the Court would take today’s action, in light of Tuesday’s NIFLA decision, it is very welcome news indeed. It is a total and complete vindication of our efforts to protect the First Amendment free speech rights of our clients – three pregnancy care centers: LivingWell Medical Clinic, Pregnancy Care Center of the North Coast, and Confidence Pregnancy Center.

Our case will now ultimately go back to the district court for a final ruling on California’s patently unconstitutional law.