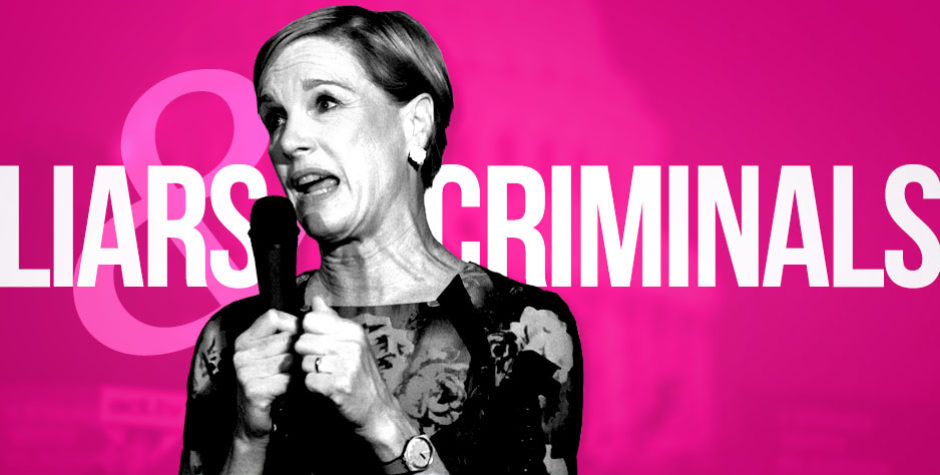 Everyone’s heard the old adage, people who live in glass houses should not throw stones. Well based on the accusations being hurled by Big Abortion ambassador Cecile Richards, the house should be shattering all around her.

Cecile Richards, who recently jumped ship from her role as CEO of flailing abortion giant Planned Parenthood, just demonstrated she can comfortably and confidently lie and cast aspersions, even when the facts contradict her every statement.

Case and point: in a new interview Richards accused the pro-life movement of lying, cheating, and breaking the law. During the interview Richards was asked why she felt Planned Parenthood was often attacked and her response was vexing at best:

I don’t exactly know what accounts for it. Obviously, there were a couple of groups that specialize in this. I think that one of the things that I see on the right is they are so much more willing to lie, cheat, steal, deceive, break the law — tactics that frankly we don’t use in the progressive community. I do think that they have that advantage. The other is, they’ve got a lot of money.

Cecile, your nose just grew by about a foot. Not only does Big Abortion lie and cover up the truth, we just told you how they are fighting to remove a new law from the books that would make them report any medical complications that happen in their clinics. They’re also opposing a provision that would subject them to inspections. If Planned Parenthood doesn’t lie or deceive, why are they so afraid of transparency or opening up their doors?

Cecile Richards has directly lied to the public. Throughout her 12-year reign over the kill-for-profit empire, Ms. Richards insisted that abortions had little to do with the rapid growth and record profits of Planned Parenthood. The consistent lie has been that that abortion makes up only a paltry 3% of their total business.

Oops. Sorry Cecile, but we exposed that lie a long time ago. Of course under Ms. Richards, Planned Parenthood mastered the art of creative accounting, padding numbers to fit their fictional 3% narrative. As we’ve shown you in the past, they were artificially inflating the numbers on non-abortion “services.”

Speaking of cheating and deceiving, Ms. Richards accused the pro-life right of having “a lot of money.” We’ve reported before how Planned Parenthood has amassed a fortune not only from the slaughter of innocent babies, but from the HALF-A-BILLION DOLLARS they receive in free tax dollar funding every single year. That’s quite a war chest. And don’t be deceived – Big Abortion is using your money to push their agenda.

The reality is Planned Parenthood is stealing your money. They are taking hundreds of millions of tax dollars from millions of Americans who don’t want to give them a dime. When you take someone’s hard earned money who doesn’t want to give it to you, that’s usually called stealing.

We are in federal court right now defending pro-life advocates  – most of whom in fact do NOT have “a lot of money” – because Planned Parenthood is suing to strip them of their freedom of speech. The abortion industry has used its political influence to push abortion friendly laws that are forcing pro-life pregnancy centers to promote free taxpayer funded abortion. The last thing Big Abortion wants is for desperate mothers and influential young people – who we know they are desperately targeting – to hear the truth about abortion.

Let’s not forget the biggest lie. The biggest deception Cecile Richards and Planned Parenthood ever tried to pull over on the American people – that they did not profit from the sale of aborted baby organs and body parts. That lie was debunked by numerous news and media outlets, and it’s exactly why Planned Parenthood is under investigation by the U.S. Department of Justice for the abhorrent, ghoulish practice. Under investigation for, how did she put it, “break[ing] the law.”

Now I would ask Ms. Richards, who is really being deceitful? Who is actually lying? Who is stealing? Who is in fact spending considerable sums to attack and silence their enemies? Who is breaking the law? And lastly, who is the one with innocent blood all over her hands?

At the ACLJ, we've taken on more than half a dozen massive pro-life cases across the country, each of which could end up at the Supreme Court. We are relentlessly committed to crippling Big Abortion, ending taxpayer funded abortion once and for all, and saving countless innocent babies.

And that is no lie.