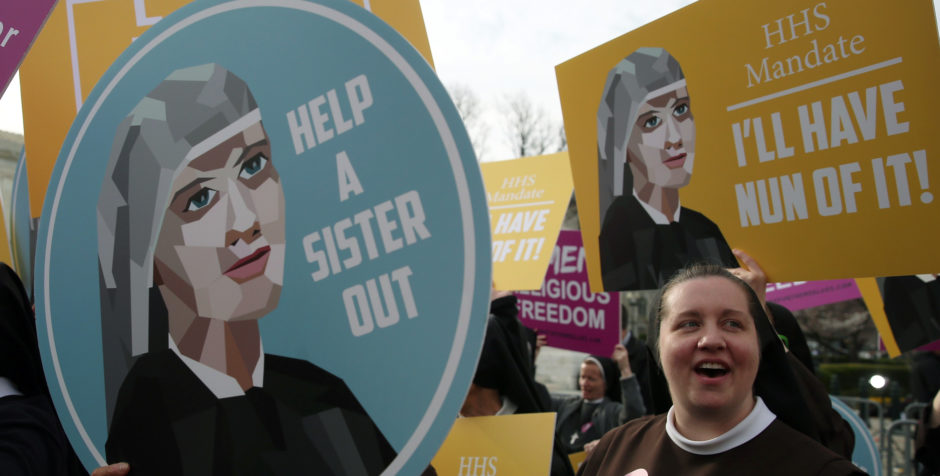 When the Obama Administration first sought to coerce religious organizations, family-owned businesses, and non-profit advocacy groups into facilitating the provision of morally objectionable drugs and services (including abortion pills) as part of ObamaCare, the ACLJ took action.

In addition to filing seven different lawsuits – including a certiorari petition granted by the Supreme Court – on behalf of thirty-two individuals and businesses, and submitting amicus briefs with the Supreme Court in support of Hobby Lobby and the Little Sisters of the Poor, the ACLJ filed numerous formal comments with the Department of Health and Human Services (HHS) and other agencies expressing our objections to the HHS abortion-pill Mandate.

Soon after the Mandate was imposed on the country by regulatory fiat over five years ago, the ACLJ filed comments on behalf of the Dominican Sisters of the Congregation of St. Cecilia of Nashville.

We not only argued that the Mandate was unconstitutional under the First Amendment and illegal under federal law, we also described the devastating impact the Mandate would have on the Nashville Dominicans:

In their 151-year history, the Nashville Dominicans have, with the help of God, survived a Civil War on their doorstep, deadly epidemics, devastating floods, economic depression and tumultuous social upheaval. Today, however, they face a new, more insidious threat — their own government . . . Should HHS persist in implementing the Interim Rule and its contraceptive mandate without major modifications, the Congregation will be forced to curtail its mission. What war and disease could not do to the Congregation, the government of the United States will do. It will shut them down.

That was no hyperbole. The financial penalties for failing to comply with the Mandate are so steep, no organization or business could long pay the penalties without being forced to close their doors. Two of our former clients who own and run a family-owned business in Ohio would have had to pay 14 million dollars per year for not complying—simply because they wanted to run their business pursuant to their religious beliefs.

After the Supreme Court’s decision in Hobby Lobby, which held that the government couldn’t force closely-held companies to kowtow to the Mandate’s demands, the Obama Administration concocted a so-called “accommodation.” Under that scheme, employers wouldn’t have to pay directly for the objectionable drugs and services themselves, but would instead have to sign and submit a statement that would trigger the provision of those very same drugs.

The Administration naively—not to mention, erroneously—thought that this accommodation wouldn’t substantially burden anyone’s religious beliefs or exercise. It couldn’t grasp the basic moral and religious objection at issue: it wasn’t simply about paying for the drugs, but being morally complicit in their provision.

As we stated in a second round of formal comments objecting to the specious reasoning of the Obama Administration:

The August 27, 2014 proposed rules and interim final rules fail to address the core moral problem that the Mandate poses for objecting for-profit and non-profit employers: under the new so-called “accommodation” process, they will still be forced to participate in the provision of drugs and services to which they strongly and religiously object.

We emphasized what we thought was the only proper legal and constitutional way to remedy the religious burdens imposed by the Mandate: “Both for-profit and non-profit entities that hold such religious objections should be given a complete exemption . . . from having to comply with the Mandate.”

The Obama Administration, however, wouldn’t give up the fight. After the Zubik decision, where the Court refused to uphold the government’s fallacious “accommodation,” it once again declined to grant complete exemptions to objecting employers. The Administration remained firm in its conviction that, one way or another, even employees of Catholic nuns must have access to abortifacient drugs through a process that requires direct involvement and facilitation by objecting employers.

As we said in a third round of comments:

Unless and until the Departments can appreciate the root concern objecting organizations have with respect to their participation in wrongdoing, any further accommodations established and imposed by the Departments will be a fruitless exercise . . . . The decision of what constitutes crossing a morally impermissible line is for the religious believer to decide, not the government. The Departments (or even the courts) have no authority to say that the religious beliefs of objecting organizations “are mistaken or unreasonable.”

As reported here, after last year’s election, and with a new Administration in place, the government made—at long last—an about-face. Consistent with the numerous formal comments submitted by the ACLJ, the government issued interim final rules granting total exemptions under the Mandate based on religious or moral beliefs.

Today, five years after first objecting to the egregious violation of civil liberties created by the abortion-pill Mandate, we have filed formal comments in support of the Trump Administration, applauding its actions that favor religious freedom and the right to conscience:

The ACLJ welcomes and commends the Departments for, at long last, truly accommodating objecting entities and individuals from having to comply with the Mandate. The exemptions afforded by the [rules] will allow these persons to fulfill their respective roles in society without having to abandon their religious convictions or moral conscience. A Catholic order of nuns will now be able to serve the poor and needy without having to be complicit in the provision of drugs to which they object. An evangelical, family-owned business will not have to choose between shutting its doors or staying true to its beliefs. A pro-life organization will be able to continue its pro-life advocacy without having to participate in a governmental scheme that undermines its very mission and identity.

The comments not only express our support for the exemptions, but explain why those rules are a constitutional means of accommodating religion under the Establishment Clause. Indeed, as we discussed here, several states have filed lawsuits challenging the new rules. One of the claims advanced by the states is that the new rules impermissibly endorse religion and thus breach the so-called wall between church and state. This is absurd.

Just as we are confident that the courts will ultimately reject this argument, we are confident that the Administration will officially enact the interim final rules as written. The costly, lengthy, and unconstitutional efforts by the government to force employers to set aside their religious beliefs or surrender their right of conscience should never have been attempted in the first place. The new rules correct the errors of the past and provide a new path forward consistent with the principle of religious freedom upon which our country was founded.