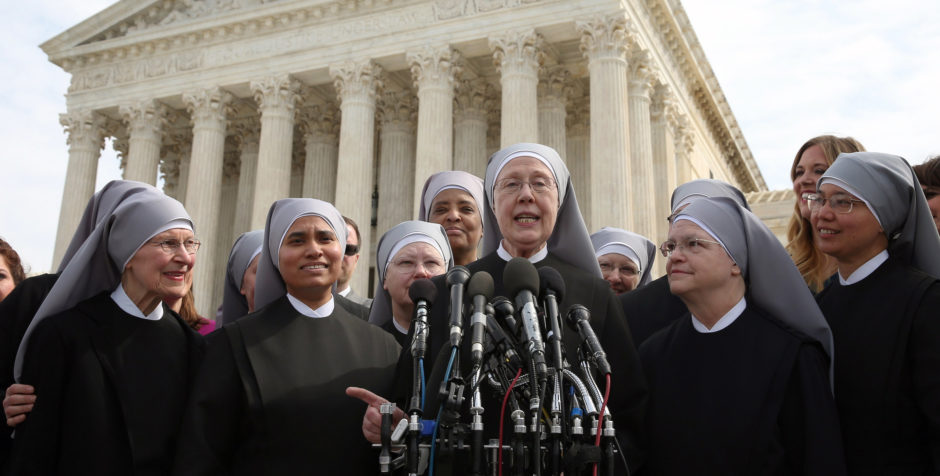 Religious Freedom and Life are Under Attack Again in Federal Court

Under Attack Again in Federal Court

As explained here, the Trump Administration issued Interim Final Rules last month regarding religious and moral exemptions under the HHS abortion-pill mandate.  For years, we fought for the government to provide these conscience protections. The previous Administration’s campaign to force religious groups, businesses, and others to facilitate the provision of drugs and services to which they religiously object was wrong, unfair, and illegal. The new Rules were designed to put an end to all of that.

Mere moments after the Rules were issued, however, they came under attack.

Multiple state attorneys general, in multiple courts across the country, have filed lawsuits challenging the legality of the exemptions. They argue that in providing religious and moral exemptions to objecting entities and individuals, the government has violated, among other things, the First Amendment’s Establishment Clause.

Because the ACLJ fought long and hard to secure the religious protection afforded by the Rules, we cannot let these challenges proceed without having our voice being heard.

Today, a Pennsylvania federal court granted our motion to file an amicus brief in support of the Rules’ moral and religious exemptions.

The brief argues that the Rules are fully consistent with, and do not violate, the Establishment Clause:

Even before the founding of this country, the government alleviated burdens on religious exercise by granting exemptions, a practice wholly consistent with the religion clauses of the First Amendment. The [Rules], which are religiously neutral in purpose and effect, fall comfortably within that long-established historical tradition. Indeed, far from violating the religion clauses, the [Rules] faithfully pursue the freedoms they guarantee.

The idea, advanced by the Commonwealth of Pennsylvania and 18 other states in this case, that the Rules violate the Constitution because they impermissibly advance religion is as legally wrong as it is factually insupportable.

Time and time again, the Supreme Court has recognized that the government may, consistent with the Establishment Clause, alleviate government-created burdens on private religious exercise. The government is not limited to protecting only what the Free Exercise Clause compels, but may offer religious protections over and above what that Clause requires.

As Justice Kennedy has correctly noted, “government policies of accommodation, acknowledgment, and support for religion are an accepted part of our political and cultural heritage.”

Indeed, dozens of federal laws protect the rights of religious freedom and conscience. The “Church Amendment” provides that individuals or entities receiving federal health grants, contracts, loans, or loan guarantees are not required to participate in abortion or sterilization procedures contrary to their religious or moral beliefs. Under the Federal Death Penalty Act, “[n]o employee . . . shall be required . . . to be in attendance at or to participate in any prosecution or execution under this section if such participation is contrary to the moral or religious convictions of the employee.” Federal law provides an exemption from unemployment insurance obligations for employers that are “operated primarily for religious purposes.” The list goes on.

In fact, according to a search conducted in 1992 of state and federal laws, “the terms ‘religion’ or ‘religious’ appear over 14,000 times. Religious exemptions, in turn, exist in over 2,000 statutes.”

The hallmark principle of the Establishment Clause is neutrality, and there can be no doubt that the Rules are religiously neutral. The Rules do not give preference to one religion over another, as any person of any faith or religious belief may claim the exemption. Nor do the Rules favor religion over non-religion, as any person with a non-religious, moral objection to the drugs required by the Mandate may also claim the exemption.

Thus, no matter what current Establishment Clause test one chooses to apply, the Rules do not breach the First Amendment. As the Supreme Court has held, “[t]here is ample room under the Establishment Clause for benevolent neutrality which will permit religious exercise to exist without sponsorship and without interference.”

The case pending in Pennsylvania is the opening round in another series of cases regarding the rights of religious groups, family businesses, and others to pursue their interests pursuant to their religious beliefs.

Whether the Supreme Court will eventually intervene depends on how these cases play out in the district courts and the courts of appeal.  There is no doubt, however, that Pennsylvania and others will push these challenges as far as they can.

We will keep you posted on our efforts to ensure that the Rules are upheld and the exemptions they provide are secured. The ACLJ remains committed to Thomas Jefferson’s proposition that “no provision in our Constitution ought to be dearer to man than that which protects the rights of conscience against the enterprises of the civil authority.”