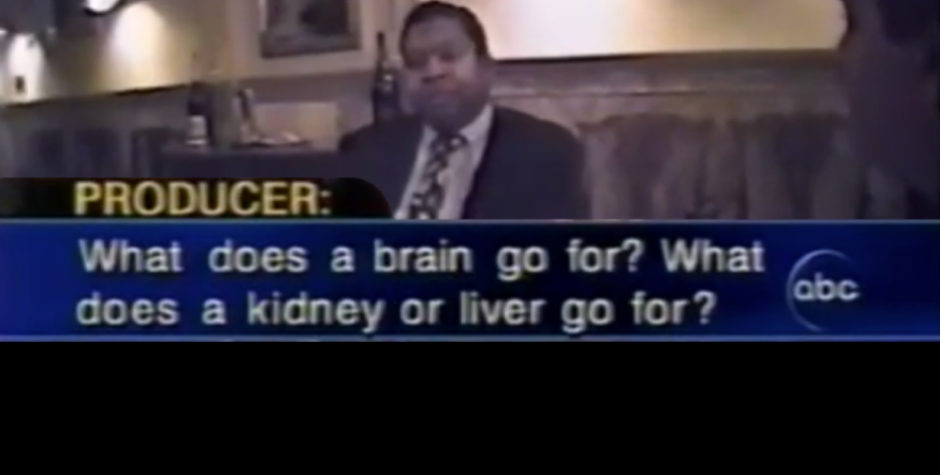 Two big things happened this week in our trial against Planned Parenthood. One of the Defendants majorly undercut Planned Parenthood’s case, explaining what he thought Planned Parenthood “bought all of, was this business model that runs directly contrary to the federal law in fetal tissue sales.”  And in a major moment in the trial, a video of an ABC News 20/20 undercover investigative report that first exposed illegality in the fetal tissue procurement and abortion industries was played for the jury.

First, Planned Parenthood’s legal team brought up an email that co-Defendant David Daleiden, one of the pro-life investigative journalists who recorded conversations with abortionists about aborted babies’ body parts, wrote to one of the other co-Defendants regarding his conversation with Planned Parenthood Medical Director Deborah Nucatola. We discussed the contents of this email as it came up in the trial a few days ago.

Within that email Daleiden wrote “She bought it all, hook, line, and sinker.”

Planned Parenthood’s attorney asked why he had used that phrase, in what seemed like an attempt to trap him:

“And by saying ‘She bought it all hook line and sinker,’ you were referring to the fact that you were representing yourself as Robert Sarkis of BioMax, a new fetal tissue procurement company. Correct?”

“Not exactly. I was primarily referring to the undercover scenario that we were presented as regards the kind of business plan or business model that BioMax was proposing. Which was a standard tissue procurement organization business model, where a middleman company would send in technicians to inside – embed inside a Planned Parenthood clinic to do all the work of harvesting body parts, and then make a per-volume payment to the Planned Parenthood clinic, based on the number of specimens harvested.

That’s what I was specifically referring to by what I felt that she bought all of, was this business model that runs directly contrary to the federal law in fetal tissue sales.”

Planned Parenthood’s attorney again pressed, calling the phrase: “a cliché that is designed to communicate that the person who’s buying it hook, line, and sinker has been duped in some way.”

“I was not using it for that specific of a meaning.

I was simply using it to communicate that I felt that Dr. Nucatola, as the senior director of medical services at PPFA [Planned Parenthood Federation of America], had completely accepted the undercover scenario of the BioMax business model that we were proposing, which I think is a -- is a business model that runs completely contrary to the federal law on fetal tissue transfers.”

"She bought it all hook line and sinker, and admitted PP National knows the potential for illegality/unethics but has a don't ask don't tell policy, going so far as to choose to keep nothing in writing about fetal tissue because it's too dangerous. If something happens they want the affiliates to take the fall."

What I meant by that sentence, starting off with "hook line and sinker" is that I felt she had bought the illegal business model that BioMax was proposing undercover, and had gone on to -- because of accepting that scenario, had gone on to reveal all these other problems that PPFA was aware of with their fetal tissue programs.

As we’ve told you, Planned Parenthood Federation of America (PPFA) and its affiliates filed this lawsuit seeking to discredit and silence the investigative journalists because they recorded its officials in undercover videos.

Now the truth of Planned Parenthood’s actions is coming to light. In fact, the defense was able to show a video to the jury that further exposed the fetal tissue procurement and abortion industries. We’ve previously explained how throughout this trial Planned Parenthood has been fighting to keep the reality of what is occurring in these industries from coming before the jury.

The video that was allowed to be played in its entirety was a segment on the ABC News program 20/20 that was first aired in 2000. It featured undercover video of conversations between a 20/20 producer posing as a potential investor, and Dr. Miles Jones, a Missouri Pathologist, regarding disturbing practices in the fetal tissue procurement and abortion industries.

Before the video was played Daleiden was asked if he had been aware of this video prior to his own undercover investigation. In fact, he testified that this report is what led to his investigation:

Question: About that time did you become aware of a video that had been done concerning that same topic, done by ABC, a 20/20 segment?

Daleiden: Yes, I did.

Question: Okay. Did that -- how did that segment and Congressional testimony influence your thinking regarding your plans for this project?

Daleiden: So there was a -- through the Congressional transcript, I learned that ABC's 20/20 program had actually done their own -- their own news story on the topic of fetal trafficking right at that same time, in March of 2000, and they had both done interviews with whistleblowers, including one of the individuals who testified at the Congressional hearing. They also did interviews with some of the principals of the Planned Parenthood clinic in Kansas and the middleman companies who were harvesting and selling body parts from inside of it.

And they also did -- the ABC 20/20 producers did their own undercover investigation as well with participants in that fetal organ trafficking ring.

Then video was then played in its entirety in the courtroom for the jury (you can watch it below).

In it, journalist Chris Wallace reiterated that it is illegal to sell fetal tissue, as well as to alter abortions to preserve fetal organs for sale. As Wallace stated in the 19 year-old undercover report:

“. . . laws have been passed to draw a clear line. A woman must decide to have an abortion before she’s approached to donate the fetus. Abortions can’t be altered to get better specimens. And above all, tissue can’t be sold for profit. Despite all that some businessmen have slipped in, and turned human fetuses into dollars.”

In the same video, Dr. Jones discussed the process of selling fetal tissue, matching “supply and demand,” and what he projects his company will make from these transactions.

This is only the latest shocking revelation to come out of this trial. We previously reported that when asked on cross examination if there were actual demands for certain organs, another Planned Parenthood abortionists who took the stand testified:

That abortionist also admitted to wanting to sell what he referred to as “barrels and buckets” of medical waste – including aborted babies’ body parts – to a research company.

As the trial moves forward we will continue to keep you updated with new revelations the witness testimony produces.

You can read more about the trial here: