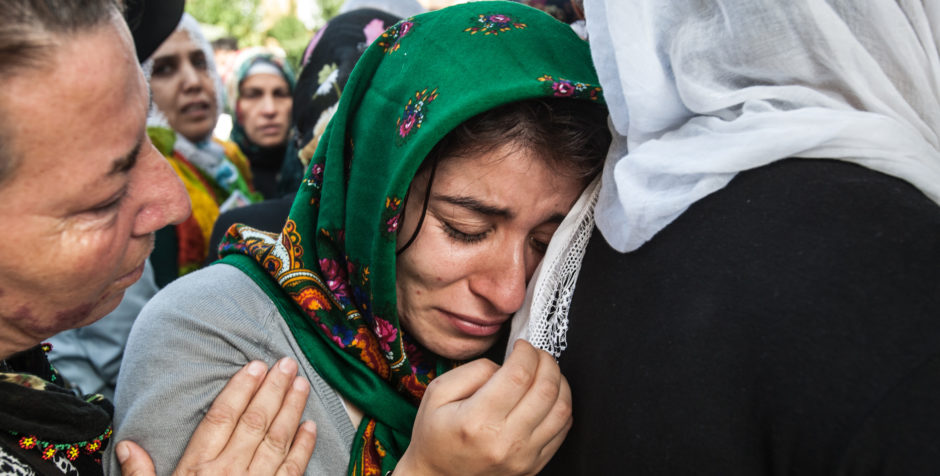 As Christians suffer persecution and death, we can – and MUST – be their voice.

To combat these atrocities, we are continuing to expand our largest legal advocacy campaign for Christians facing genocide globally.

In July, we sent crucial legal letters to 12 world leaders – most of whom have experienced Islamic State (ISIS) attacks within their borders – imploring them to use their influence at the United Nations to “recognise and declare that the ongoing atrocities committed by the Islamic State and associated groups constitute genocide and that Christians are among those victimised.”

These appeals did not go unheard. Last month, we received a response from the British Prime Minister’s office at 10 Downing Street expressing appreciation for our letter and informing us that “[t]he Prime Minister has asked . . .  a Minister in the Foreign and Commonwealth Office . . . to look into this matter in further detail,” and “to reply to [the ACLJ] directly.”

We have recently received the promised reply.

The Rt. Hon. Alistair Burt MP – a Minister in the British Foreign and Commonwealth Office (more commonly referred to as the “Foreign Office”) – replied to our plea to recognize the ISIS atrocities in Iraq and Syria as genocide against Christians.

As the Foreign Office’s letter to us stated:

I share your anger at the human suffering of Christians . . . in Iraq, Syria, and the wider Middle East, many of whose communities have been devastated at the hands of [ISIS]. I want to see Christians and other minorities continuing to live, worship and prosper in the Middle East. We are doing all we can to make this happen – providing humanitarian assistance to all those who need it, including minority communities and consistently underlining with the region’s political leaders the importance of upholding freedom of religion and belief.

It is the policy of the British Government that any judgment on whether genocide has occurred is a matter for judicial decision, rather than for governments or non-judicial bodies. However, it is clear there is a growing body of evidence that terrible crimes have been committed by [ISIS], as described in the distressing accounts conveyed in your letter. Our approach remains to seek an end to all abuses and violations, irrespective of whether they fit the definition of specific international crimes.

We are encouraged by this response, specifically referencing the horrific plight of Christians and other religious minorities at the hands of ISIS and acknowledging the growing body of evidence pointing to genocide. We are hopeful that the U.K. judiciary will make the formal recognition that this is genocide.

The Foreign Office’s letter further expounds that “[t]he Government is committed to working with our international partners to ensure that [ISIS] is held to account.” It goes on to mention that approximately a year ago at the United Nations General Assembly, the British Foreign Secretary – along with his Iraqi and Belgian counterparts – “launched a global campaign to bring [ISIS] to justice.”

In his letter, Minister Burt concludes that “[t]he Government is committed to working with our international partners” and that they “believe it is essential that governments, as well as Non Government Organisations and international organisations, join together in this campaign.” As we stated in our last update on this matter, “[w]e look forward . . . to working with the British government to press forward in our genocide campaign.”

Further, in a different but related case, we continue receiving monthly document productions from the State Department as a result of our lawsuit demanding that it comply with the law and release records showing what, if any, action it has taken to counter the genocide and help the victims.  Under the Obama Administration, the State Department ignored our document requests, so we took them to federal court.

We will continue to pressure the United Nations and reach out to individual member nations that have suffered at the hands of these genocidal jihadists. We will also keep the pressure on our own State Department. But we need you to join us and support our 7-point plan to stop the ISIS genocide of Christians.

Stand up for our brothers and sisters in Christ by adding your name to the petition to stop the genocide and protect our fellow Christians. We will not allow persecuted Christians in these ISIS-infected regions to be forgotten and destroyed.