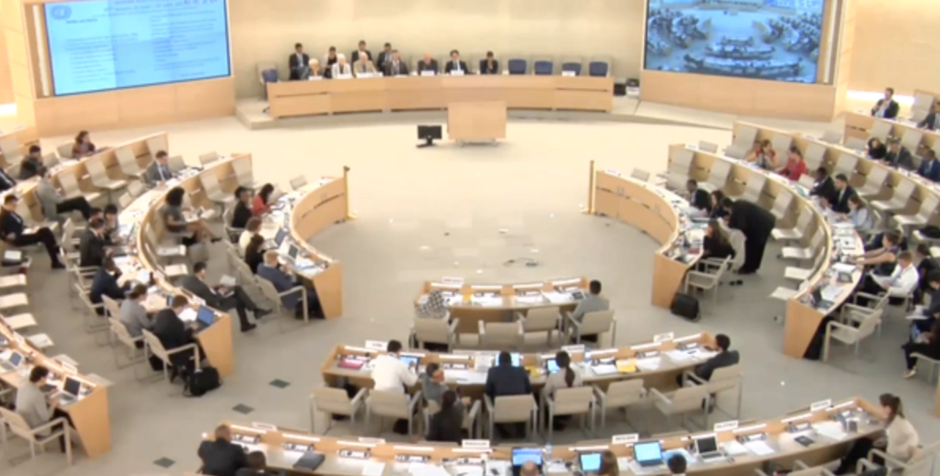 Defending Christians from Genocide at the U.N. Human Rights Council

Defending Christians at the U.N.

Today, through our affiliate, the European Centre for Law and Justice (ECLJ), we made an oral intervention before the United Nations Human Rights Council on behalf of Christians facing genocide in the Middle East.

We gave our most detailed account yet of the atrocities carried out by ISIS against Christians and other religious and ethnic minorities. We stated:

In February of 2017, the ECLJ submitted its second written and oral testimony to this Council requesting that the United Nations (U.N.) join other international bodies and publically proclaim that Christians and other religious minorities in Iraq and Syria are victims of genocide and deserving of international assistance and protection. Yet again, this body has remained silent while the Islamic State (“ISIS”) has continued its barbaric work.

The actions of ISIS against Christians and other religious minorities in Iraq and Syria clearly embody the definition of genocide as enshrined in the Convention on the Prevention and Punishment of the Crime of Genocide. The ISIS campaign to destroy these religious minorities and decimate their homelands and cultures undoubtedly meets the definition of genocide, and as long as the UN does not recognize it as such, these vulnerable groups remain unprotected and in peril.

We got the report of  a Christian Syrian woman who saw “‘Christians being killed and tortured, and . . . children being beheaded in front of their parents’”. She said, “250 children . . . were put in the dough mixer, they were kneaded. The oldest one of them was four-years-old”. ISIS tortured a boy while demanding his father and two others renounce Christianity, before executing all four by crucifixion. Eight Christian women were publically raped and beheaded. There are “mass graves of Christians”.

The victims of ISIS’s genocide deserve the recognition and protection of the international community. It is imperative that the U.N. acknowledge the ISIS campaign for what it is – genocide – end these atrocities, and seek justice for the victims.

While the ECLJ calls for swift and decisive action by the international community to stop the genocide and protect the victims, it also understands that first the U.N. must recognize that the atrocities constitute genocide.

Our statement calls upon the U.N. to declare that the atrocities carried out by ISIS against Christians and other religious minorities are genocide.  The victims of these acts of genocide desperately need recognition, protection, and support from the international community.

Today’s presentation at the U.N. echoed a written submission we filed at the U.N. last month.

We continue our aggressive legal advocacy campaign across the globe in order to put an end to the genocide being carried out against Christians and other religious minorities.  This presentation before the U.N. is the latest in a continued effort to protect Christians and put an end to genocide.  Previously we have:

Sent key legal letters to the former U.N. Secretary-General, Ban-ki-Moon, the U.N. Office of the Special Adviser on the prevention of Genocide, the former U.S. Permanent Representative to the U.N. Ambassador Samantha Power, and more recently, a letter to the current Permanent Representative of the United States to the United Nations, Ambassador Nikki Haley.  We also submitted letters to the 47 Member States of the U.N. Human Rights Council.  In addition, we sent two letters to then-Secretary of State John Kerry and followed those letters with a letter to current-Secretary of State Rex Tillerson.  We’ve submitted key legal documents and made two oral interventions at the U.N. Human Rights Council.

Join us as we continue vigorously advocating to provide support and protection for Christians who are the victims of genocide.  Sign our petition today, and help us stand against and end the ISIS genocide against Christians.