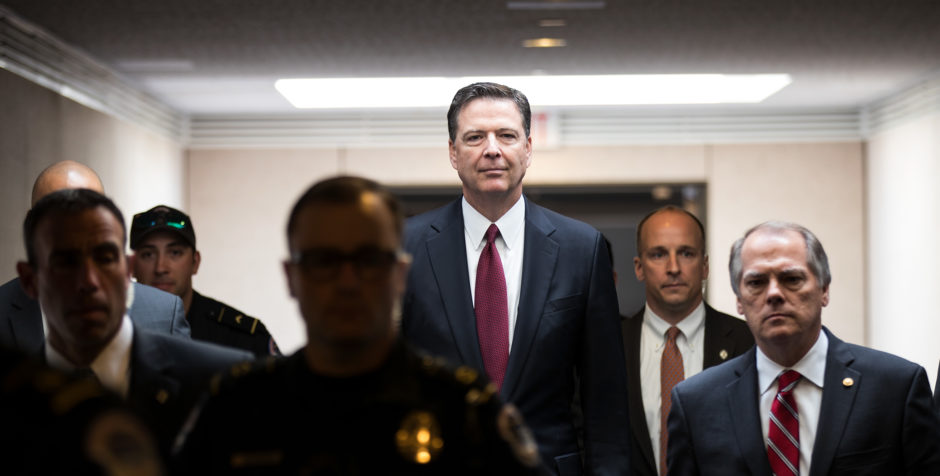 Crimes, Corruption, and Congressional Deceptions: A Comey of Errors

I’ve said it before, and I’ll say again: fired FBI Director James Comey “has broken the sacred trust of the American people.” Comey was hired to lead the FBI to protect the American people. Instead, he chose to lie, interfere in the democratic process, and break the law.

Though fired for his failures, the former director’s misdeeds are still being dragged from the shadows of the deep state and deserve to be investigated. We have been suspicious of Comey and his “investigation” of Hillary Clinton from the beginning. Now, as more information comes to light, more questions are raised.

Just days ago, news broke that Comey drafted a statement exonerating Hilary Clinton of any wrongdoing in the email investigation three months before interviewing her or sixteen other key witnesses in the case. So much for an “investigation.” An investigation finds the facts and then comes to a conclusion. Comey made his determination, then collected the facts. That is not how criminal investigations work.

The reality is there was not an actual investigation. It was fake, a fraud on the American people. Worse yet, Comey used his position of power to toy with the democratic process during a crucial election.

Here is just a brief timeline of Comey’s incessant meddling: On June 27, 2016, Bill Clinton met with Attorney General Loretta Lynch on the tarmac. On July 1, 2016, Lynch said she would take the recommendations of law enforcement officials. On July 5, 2016, Comey announced he would not recommend charges against Hilary Clinton. On July 6, 2016, AG Lynch accepted that recommendation. On October 28, 2016, Comey informs Congress the FBI is reopening the case. On November 6, 2016, two days before the election, Comey closes the case again, telling Congress there is nothing new.

But then it gets even more nefarious when you consider this: If Comey had already concluded in April or May of 2016 that there was no basis to charge Clinton, then why drag it out? It makes the timing of his public pronouncement exonerating Clinton a mere ten days after Obama’s Attorney General was embroiled in a public collusion scandal over the investigation all the more suspect.  And then he again reopens and quickly closes the investigation just days before the presidential election. Was he just trying to look like he was conducting a real investigation?

It sure appears that way. This is an unprecedented interference by an FBI Director. Comey manipulated the American people. It’s staggering corruption.

This is further evidence by the fact that instead of looking for facts, Comey’s FBI aided in their destruction. Instead of investigating Clinton’s cronies, Comey’s FBI was handing out immunity to top Clinton aides. Even worse, these immunity deals came with sweetheart terms: the aides can destroy evidence and limit the investigation to emails before January 2015, effectively covering up the cover-up. These deals also effectively prevented Congress from conducting its own investigation, thwarting subpoenas.

Comey couldn’t even give Congress an honest, straight answer about the number of emails involved in the investigation, having to return more than once to explain his blatantly misleading testimony.

Further, Comey rewrote the law. On July 5, 2016, Comey declared that “no reasonable prosecutor would bring” a case against Clinton in this matter. His reasoning was that the evidence did show she had the required criminal intent. Yet, the relevant statute (18 U.S.C. § 793(f)) “does not have an intent requirement.” In other words, Comey created an entirely new criminal statute out of whole cloth and then exonerated Clinton from his own created legal analysis.

As we have said for over a year now, Comey’s “investigation” of Clinton was a sham. The Obama Administration was never going to bring charges against Clinton.

In fact, Comey’s FBI tried to help cover up the cover-up, directly lying to the ACLJ when we submitted a Freedom of Information Act (FOIA) request to the then Comey-led FBI asking for any details it had about the secret Clinton-Lynch tarmac meeting that called the entire investigation into question.

Now we know why. There was no investigation.

However, Comey’s corruption does not end with a failed, fake investigation. Comey admitted, under oath, before the Senate Judiciary Committee to intentionally leaking privileged communications he had with President Trump to a friend for the express purpose of influencing the appointment of a Special Counsel. As we’ve explained before, this in and of itself could be a criminal act in violation 18 U.S.C. § 641, which prohibits improper disclosure of government records.

The ACLJ will not stand idly by. We have launched our own investigation into Comey’s corruption and the machinations of the deep state. We’ve already forced the FBI to renew its search for records concerning the clandestine meeting between former President Bill Clinton and Attorney General Loretta Lynch – records we now know exist.

But our fight does not stop there. We are preparing new FOIA requests – and are prepared to go back to federal court in necessary – to expose Comey’s crimes and collusion. The director of the FBI’s job is to investigate crimes, not commit them. It’s past time for the truth to come out.