Has the Winter for House Churches in China Already Come?

In the past few months, Chinese Christians have witnessed increasing pressure imposed on house churches since the revised Regulations on Religious Affairs came into effect on February 1, 2018. House churches nationwide are faced with harassment, intimidation, and domination from the government, with thousands of church locations being shut down. For instance, in one of the districts of Nanyang, a city in the Henan Province, 31 house churches were shut down within the first week of the implementation of the Regulations, and over a hundred were closed down across the whole city.

Without the proper permit, house church activities will be deemed “illegal religious activities” under Article 69 and 71 of the new Regulation. This gives local authority broad and arbitrary power to legally persecute the house churches. For instance, most house churches use residential or office space for their meetings. The local police may threaten the landlords to evict the house churches immediately in order to avoid any criminal prosecution for “aiding and abetting illegal activities.”

Recently, local governments in several provinces have carried out investigations and screenings of gathering places established by the house churches, preparing for the best ways to shut down the churches. 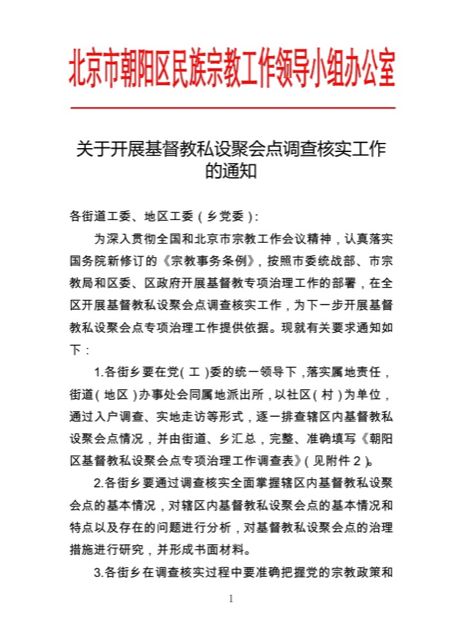 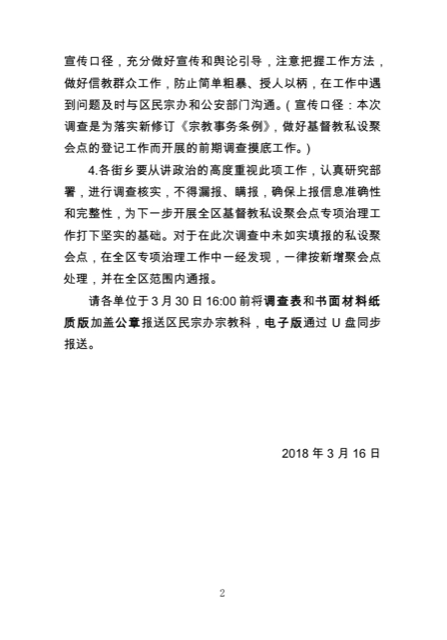 Document to carry out investigation and checking of unauthorized gathering places for Christians at street/town level, issued by the office in charge of religious affairs under Chaoyang, Beijing division of the CPC.

For instance, the largest urban church in Beijing, the Zion Church, is currently facing severe challenges under this new law. In March, the landlord requested that the church install surveillance cameras inside and outside, which the church rejected. Afterwards, many church members have been harassed, pressured, or even threatened by their landlords, neighborhood committees, employers, public security bureaus, and other authorities. The church was slandered as an illegal gathering, a politically incorrect activity, and even an evil cult. Then in May, the church received notice from the landlord that the lease for its meeting place, which should continue for an additional 5 years according to the contract, would end by August. The bookstore and cafe shop, which were operated legally for several years by the church, were also forced to shut down.

For Chinese traditional religions, such as Buddhism and Taoism, the temples are quintessential for the believers. Closing down the temples will mostly destroy the religions in those areas. This is not the case for Chinese house churches. Once the gathering place of a house church is shut down, the church members can change their gathering place to continue their religious activities. Simply targeting Christians’ places of worship can hardly destroy Christianity. In fact, it further unites its believers.

Crackdowns and breaches of lease contracts due to government interference did not end the gathering of the Shouwang Church, but rather led to their outdoor worship services in 2009. Today, house churches are figuring out more creative ways to do outdoor worship services. For example, with the use of WeChat and a pair of earphones, church members can walk and worship outdoors in groups, by listening to the services recorded by the church beforehand. Separate but still united. (Though as we previously explained, WeChat is being increasingly targeted by the Chinese government as well.)

Persecution may obstruct a visible rapid expansion of a church. But it can also be an opportunity to purify a church and revive Christians to live by faith. As the Chinese saying goes, “Life springs from sorrow and calamity, while death comes from ease and pleasure.” Has the winter for house churches in China already come? Maybe. But the spring is also closer.