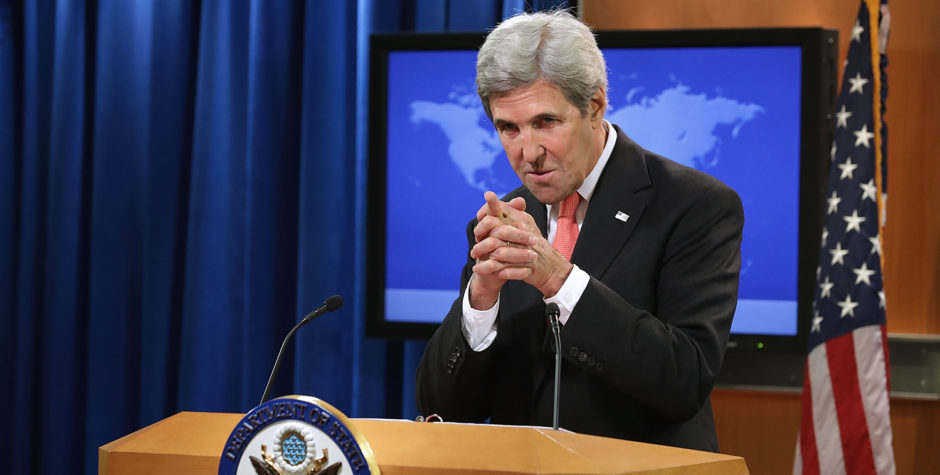 It’s hard to imagine a former Senator and Presidential candidate who touted his love and service to this country advising a foreign leader with ties to recognized terrorist groups like Hamas, but former Secretary of State John Kerry may have done just that.

News outlets have reported a London meeting took place between Kerry and Palestinian Authority (PA) Chairman Hussein Agha, close advisor of PA President Mahmoud Abbas. During their conversation Kerry reportedly sent word to Abbas through Agha that he should “hold on and be strong” against the Trump Administration.

That’s right, Obama’s former Secretary of State is reportedly taking action to undermine one of our closest allies, Israel, aid one of Israel’s ongoing adversaries, and contravene the sitting U.S. government.  Of course this is nothing new. As Secretary of State, Kerry’s State Department funneled money to an anti-Israel organization whose goal was to “replace the government” of Israel – run by none other than PA President Abbas’ son.

Through Freedom of Information Act (FOIA) requests, the ACLJ uncovered that under the leadership of Secretary Kerry, the Obama Administration gave U.S. State Department money – American tax dollars – to OneVoice, an anti-Israel Palestinian activist organization to launch a campaign against Israel. Turns out PA President Abbas is the father of Yasser Mahmoud Abbas, a senior leader of OneVoice. That group’s stated goal was to remove Israeli Prime Minister Benjamin Netanyahu from power. As we previously reported:

True to its word, OneVoice used this money to expand its social media network and voter database and even hired an American firm to train activists in grassroots campaigning. When new elections were announced in December 2014, OneVoice joined the anti-Netanyahu campaign known as Victory 15 or V15. Using the infrastructure it had created with State Department money, OneVoice helped launch “a multimillion-dollar grassroots campaign” with one objective: “replace the government of Israel.”

The Kerry State Department began issuing grants to OneVoice in 2013, the year he took office as Secretary of State.

So Secretary Kerry’s State Department was funneling taxpayer funds to an anti-Israel organization run by the son of the PA’s president, and now he’s reportedly advising that same terrorist-aligned PA president on how to circumvent the current Administration.

The U.S. has been sending more than $400 million to the PA each year. Now, Kerry would appear to be usurping the sitting President by advising the head of the Palestinian Authority. Even worse, the PA president publicly called for the downfall of America. As we recently explained:

Palestinian leaders announced their intention to suspend recognition of the existence of the State of Israel and PA President Abbas, in expletive-laden language, told the U.S. to keep its money, which totals as much as $1 billion. Defiantly addressing his comments directly to the U.S. government, Abbas went on to exclaim, “May your house be destroyed,” a familiar curse well-known to the other Arab leaders around the table at the time.

President Obama may be out of the White House, but his partisans are still trying to effectuate his policies. Kerry’s collusion with the terrorist-led PA is just one more piece of evidence.

At the ACLJ, we are fighting back. Our lawsuit against the deep State Department over the Kerry-led Department’s effort to fund a group dedicated to overthrowing the government of Israel continues. We are battling to end all U.S. taxpayer funding for the terrorist-led PA and its “pay-for-slay” atrocities. We are aggressively working through our offices on Capitol Hill and in Jerusalem to defend Israel. In fact we are just days away from filing new briefs at the International Criminal Court to once again defend Israel from PA lawfare and the U.N.’s new anti-Israel legal slush fund.

Stand with us and demand an end to taxpayer funding for Israel’s enemies.