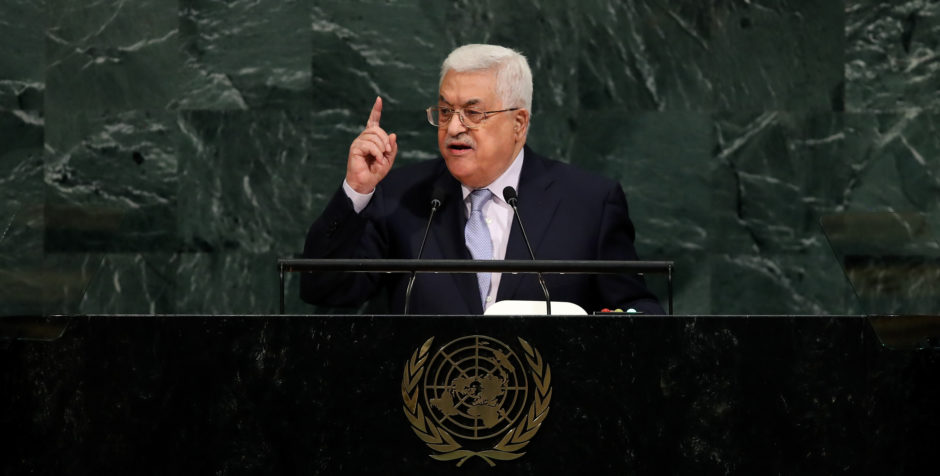 As a result of our Freedom of Information Act (FOIA) lawsuit, the ACLJ has discovered that Yasser Mahmoud Abbas, son of Palestinian Authority president Mahmoud Abbas, was also a senior leader of OneVoice: the anti-Israel activist organization that used U.S. State Department money it received during the Obama Administration to launch a multimillion dollar campaign to unseat Israel’s Prime Minister, Benjamin Netanyahu, and “replace the government” of Israel.

Starting in 2013, the U.S. State Department began to issue grants to One Voice Israel and One Voice Palestine, collectively known as OneVoice. These grants continued through November 2014, totaling nearly $350,000, four times the size of the average overseas grant the State Department awarded that year. OneVoice told the Obama State Department that it planned to engage in electioneering, yet the Obama Administration gave the organization the money anyway. Worse yet, the Administration, even fully aware of OneVoice’s intentions, imposed no restrictions on the grant.

True to its word, OneVoice used this money to expand its social media network and voter database and even hired an American firm to train activists in grassroots campaigning. When new elections were announced in December 2014, OneVoice joined the anti-Netanyahu campaign known as Victory 15 or V15. Using the infrastructure it had created with State Department money, OneVoice helped launch “a multimillion-dollar grassroots campaign” with one objective: “replace the government of Israel.”

When this story broke, the ACLJ demanded answers. In July 2016 we issued a FOIA request to the Obama State Department. The Department refused to give us any information, so we filed a federal lawsuit to compel compliance with the law. We won. A year later, under court order, the State Department began to give us the truth.

In one of the latest productions of documents responsive to our FOIA request, we uncovered a startling revelation. Yasser Mahmoud Abbas, son of Mahmoud Abbas, the leader of the terrorist-allied Palestinian Authority, was also a senior leader and advisor to OneVoice – and, as demonstrated by the contents of the documents themselves, the Obama Administration knew this.

In short, the Obama State Department gave U.S. taxpayer dollars to a terrorist-affiliated organization (the PA recently united with the terrorist group Hamas) to unseat the democratically elected leader of the only free democracy in the Middle East and a vital U.S. ally.

This was, and still is, wholly unacceptable. Misguided efforts like this do not support peace. Instead, they embolden and enrich enemies of the United States and further destabilize the region. In fact, just this week, Palestinian leaders announced their intention to suspend recognition of the existence of the State of Israel; and PA President Abbas, in expletive-laden language, told the U.S. to keep its money, which totals as much as $1 billion. Defiantly addressing his comments directly to the U.S. government, Abbas went on to exclaim, “May your house be destroyed,” a familiar curse well-known to the other Arab leaders around the table at the time.

In addition to the irony of a non-existent State refusing to recognize a legitimate nation, the great irony here is that Abbas’s rhetoric—which now matches the Palestinian Authority’s longtime actions—may prove to be his own regime’s undoing. Given its refusal to sever ties with terrorists, and its clear appetite for violence and destruction rather than peace, we should give the Palestinian Authority exactly what it asks for and keep our money.

The ACLJ has actively fought for peace and the right of Israel to exist before the U.N., on Capitol Hill, and through our offices in Jerusalem. We have dug into the shadows and uncovered the corruption of the Deep State and its anti-Israel agenda. Now, with your continued support, we can continue our efforts to stand with Israel and drag the truth from the shadows.