FACT CHECK: Sally Yates Lied at the DNC – She Was Fired for Refusing to Defend an Order the Supreme Court Found Was Constitutional, Not an “Unlawful Muslim Travel Ban” | American Center for Law and Justice
Search  |  Logout  |  Login  |  Register 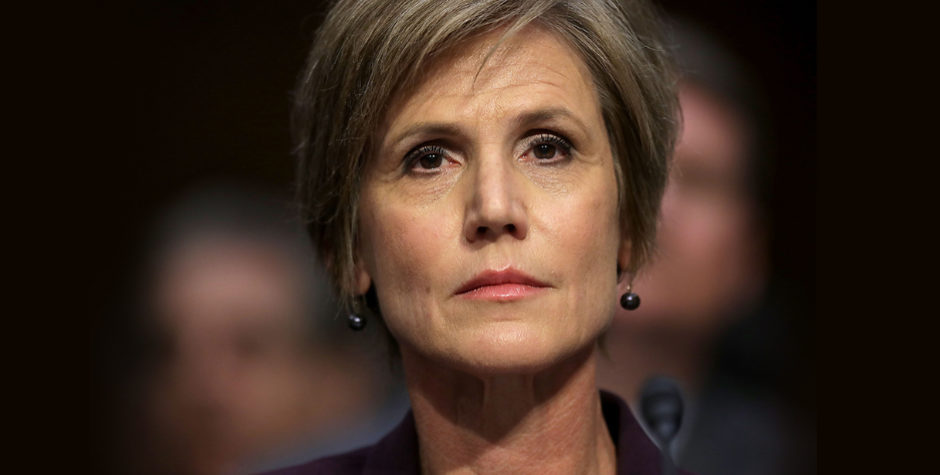 FACT CHECK: Sally Yates Lied at the DNC – She Was Fired for Refusing to Defend an Order the Supreme Court Found Was Constitutional, Not an “Unlawful Muslim Travel Ban”

Even though she publicly refused to follow the Constitution, do her job, and protect America’s interests, former acting Attorney General Sally Yates just appeared at the Democrat National Convention (DNC) to bash President Trump and claim she was terminated due to what she deceitfully called a “shameful and unlawful Muslim travel ban.”

“I was fired for refusing to defend President Trump's shameful and unlawful Muslim travel ban,” she boldly and sanctimoniously proclaimed.

That’s a boldfaced lie. There is no other way to put it. She refused to do her job and uphold the President’s lawful travel restrictions. That’s not me saying it; the Supreme Court upheld the President’s Executive actions as lawful and not a “Muslim travel ban.”

We know, because we helped defend it at every stage of the lawsuits and ultimately at the United States Supreme Court. Nearly 300,000 of our members joined us in that fight. The ACLJ was active in our defense of the President’s lawful orders. Ultimately, the ACLJ filed 3 briefs at the Supreme Court, briefs at the Ninth and Fourth Circuits, and briefs at the U.S. District Courts for Hawaii, Washington state, and Maryland. We defended the lawfulness of the President’s travel restrictions at every step of the way. And we won. Sally Yates’s position lost, big-time.

Shortly after taking office, President Trump issued an Executive Order to defend the safety of all Americans. As we reported, that order suspended immigrant and nonimmigrant entry to the United States from 7 countries of concern, temporarily paused the entire U.S. refugee program, and prioritized claims of people seeking refugee status due to religious persecution.

Critics of the President began calling it a “Muslim ban” to whip up fervor in the media, even though nothing in the President’s order banned the entry of Muslims. The original countries listed in the ban were Iran, Iraq, Syria, Sudan, Libya, Yemen, and Somalia – all known terrorist hotspots. Remember, this was issued when President Trump first took office and ISIS controlled large swaths of Iraq and Syria and was expanding.

One high-ranking critic was acting Attorney General Sally Yates, an Obama Administration holdover, who decided her personal image was more important than defending the Constitution, the rule of law, and the security of our nation.

Now, Sally Yates has crept her way back into the national spotlight, appearing at the second night of the DNC. But really, Yates used the opportunity to attack the President and rewrite history regarding her firing. The way Yates spins it, she was fired because she refused to uphold what she calls President Trump’s “Muslim travel ban.”

As we told you at the time of her firing:

Disappointed bureaucrats don’t get to pick and choose what Executive orders they will follow. Yates does not even claim that the Executive order in question violates the Constitution.  In fact, her order not to follow the President’s order acknowledges that the “Office of Legal Counsel had reviewed the order to see if it was ‘lawful on its face.’” She merely claimed that it is not “wise” and she is not “convinced” it will be upheld in court.  She brazenly concluded that “for as long as I am Acting Attorney General, the Department of Justice will not present arguments in defense of the Executive Order . . . .”

That’s not her job.  The acting Attorney General does not get to create a constitutional crisis merely because he or she has a policy dispute with the President.

[T]he Supreme Court substantively agreed with the arguments raised by the ACLJ. The Court explained that President Trump lawfully exercised his broad discretion to suspend the entry of aliens into the United States based on his findings (after a worldwide, multi-agency review) that the entry of aliens from the countries of concern would be detrimental to our national interest. Further, the Supreme Court stated that the plaintiffs failed to make the necessary showing that the Proclamation violates the Establishment Clause, despite their claims that alleged campaign-trail comments demonstrated religious animus. The Court held that the Proclamation, which says nothing about religion, is based on legitimate, national security justifications.

Under the Immigration and Nationality Act, foreign nationals seeking entry into the United States undergo a vetting process to ensure that they satisfy the numerous requirements for admission. The Act also vests the President with authority to restrict the entry of aliens whenever he finds that their entry “would be detrimental to the interests of the United States.” 8 U. S. C. §1182(f). Relying on that delegation, the President concluded that it was necessary to impose entry restrictions on nationals of countries that do not share adequate information for an informed entry determination, or that otherwise present national security risks. . . .

The Proclamation is expressly premised on legitimate purposes: preventing entry of nationals who cannot be adequately vetted and inducing other nations to improve their practices. The text says nothing about religion. . . .

Under these circumstances, the Government has set forth a sufficient national security justification to survive rational basis review. . . . We simply hold today that plaintiffs have not demonstrated a likelihood of success on the merits of their constitutional claim.

But according to Sally Yates, the President was wrong, and she ignores the Supreme Court’s ruling as if it didn’t exist. And she pompously claims that she was somehow right to shirk her duties as acting Attorney General. I suppose if she was looking to be celebrated by the extreme Left and the enemies of America, then she did the “right” thing. But to those of us who believe in the security of our constitutional republic and the safety of the American people, she turned her back on us, and now she’s spinning a new narrative to defend her indefensible actions. Her firing was not only justifiable, it was the only response.