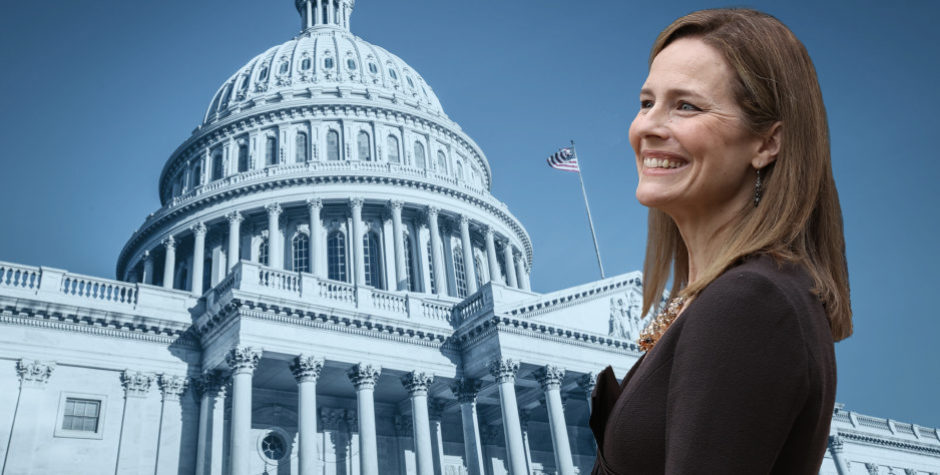 Today, the ACLJ delivered a letter to the U.S. Senate Judiciary Committee calling for the swift confirmation of Judge Amy Coney Barrett to the Supreme Court of the United States. The letter accompanied our petition, which more than 152,000 people have signed to express their desire that Judge Barrett be swiftly confirmed. This strong show of support for Judge Barrett comes just before the Judiciary Committee convenes a multi-day hearing beginning on Monday to consider Judge Barrett’s qualifications.

At the ACLJ, we have long been committed to ensuring that all Americans are afforded their God-given rights secured by the U.S. Constitution and under the laws of our land. We work tirelessly to preserve these freedoms and to prevent them from being trampled. One of the most important aspects of this work is advocating for the confirmation of judges to the federal courts who cherish, and promise to uphold, the Constitution. Nowhere is this commitment more critical than when considering a nominee to the U.S. Supreme Court.

President Trump’s latest nominee to the Supreme Court, Judge Amy Coney Barrett, has impeccable credentials and is an exceptionally qualified jurist who is committed to a principled view of the Constitution. She has a track record that demonstrates absolute fidelity to the law, and to the limited role of the federal judiciary to enforce—not create—the law.

Nonetheless, the Left in Washington, D.C., will continue to find ways to attack her, including attacking her religion or the fact that she adopted two children from Haiti. We know this is likely to occur because we saw it when Judge Barrett was nominated to the Seventh Circuit Court of Appeals in 2017. During her confirmation hearing for that post, Sen. Dianne Feinstein and Sen. Dick Durbin were particularly critical of the fact that Judge Barrett takes her faith seriously. Sen. Feinstein went so far as to tell Judge Barrett it was a “concern” that “the dogma lives loudly within you.”

The odds are high that next week will bring with it similar attacks on Judge Barrett’s faith. It will be very important for the American people to remind our leaders that Article VI, Section 3 of the U.S. Constitution prohibits any religious test for any public office. Therefore, the suggestion that Judge Barrett’s faith is in any way problematic is flatly unconstitutional.

In our letter to the Senate Judiciary Committee, we state that:

A thorough review of Judge Barrett’s record leads to the unmistakable conclusion that she is unwavering in her commitment to the Constitution and eminently qualified to serve on the nation’s highest Court. Given this impressive record, and given that Judge Barrett has been recently confirmed by a bipartisan Senate majority, she should be confirmed and sworn in as an Associate Justice of the Supreme Court of the United States without delay. This conclusion is corroborated by the almost 100 cases she participated in since joining the Seventh Circuit Court of Appeals. It is unquestionably clear that she remains a principled jurist who believes in the text of the Constitution. She has demonstrated beyond question that she is unafraid of going where the law directs her as opposed to being driven by her personal preferences.

We are looking forward to hearing Judge Barrett’s testimony next week as she is considered to serve on our nation’s highest Court. We urge the Senate to swiftly confirm this extremely well-qualified nominee. The Supreme Court and our nation as a whole will be well-served by her experience and expertise.

Just when you thought we’d get through this confirmation hearing in a classy way, Judge Amy Coney Barrett gets hit with repulsive questions. On today’s Jay Sekulow Live/The Logan Sekulow ReProgram , we talked about the first day of questioning by the Senate Judiciary Committee. We had hoped that...