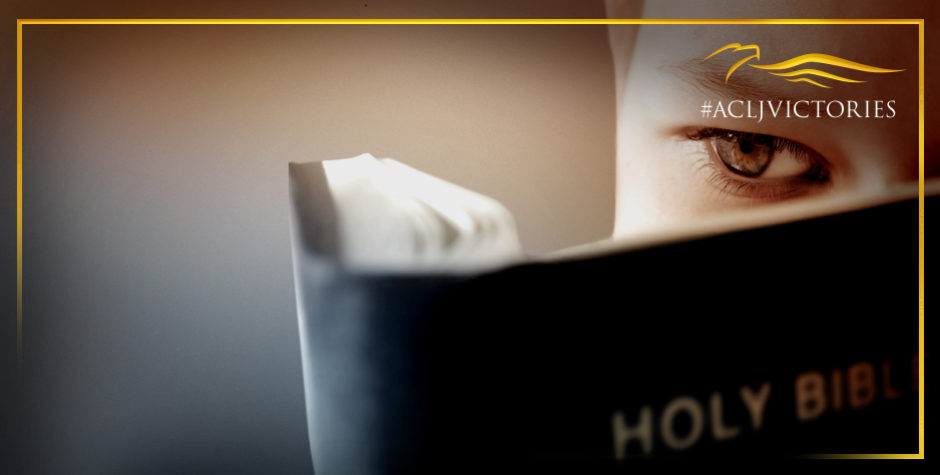 Christian kids have a Constitutional right to bring their Bibles to school.

This year the ACLJ took action to defend a child when that right was infringed upon by the school administration.

A fourth grader, who often brought his Bible to school so he could read it during recess was told by the school principal that he was no longer allowed to read from it. The Bible was taken away and the child was also warned against discussing faith with other Christian students during recess.

We can’t imagine the embarrassment and alienation these unjust actions must have caused the young boy.

That’s why the ACLJ immediately contacted the school to address this blatant violation of the First Amendment. We sent a letter informing the principal that it is well settled law that student religious speech on public school campuses is fully protected under the First Amendment to the Constitution. Further, the First Amendment precludes any government effort to single out and censor or otherwise burden the speech of private parties solely because that speech is religious.

Courts have held, time and again, that school officials may not intrude upon a student’s First Amendment expression without sufficient justification. Nothing justifies or empowers school authorities to prohibit students from speaking peacefully about their faith and/or reading from the Bible on school grounds during recess or other non-instructional times.

No child should have their Bible confiscated. No child’s religious expression should be silenced by school officials.

The ACLJ will continue defending students from unconstitutional discrimination for their faith at school.

To help the ACLJ continue to have the resources we need to make these First Amendment victories for Christians possible, please consider making a Tax-Deductible donation to the ACLJ through our year-end Matching Challenge. Your gift will be DOUBLED dollar-for-dollar through the end of the year.