A New Low: Left Attacks Amy Coney Barrett for Having a Career and Family, Being a “Racist” for Adopting Children From Haiti, and Actually Living Out Her Christian Faith

There was a time, not so long ago, when women were encouraged to balance career and family and were told they could have it all.

Now, devoid of any real ammunition to use against the President’s nomination to be the next Associate Justice of the Supreme Court, Amy Coney Barrett, the Left is using the fact that Judge Barrett has built an impressive legal career while raising seven children against her.

And even worse, some on the Left have gone so far as to make the sick implication that Judge Barrett may have adopted two black children from Haiti as “props.” They also said that some white people who adopt black children are actually “White colonizers.”

President Trump has officially announced his nomination of Judge Amy Coney Barrett of the U.S. Court of Appeals for the Seventh Circuit to become the next United States Supreme Court justice, filling the vacant seat of venerable Justice Ruth Bader Ginsburg.

The ACLJ applauds the nomination of Judge Barrett as the right choice for the seat, not only as a role model to all women – which she undoubtedly is – but as a consistent, constitutional jurist. As we said when she was nominated:

Given Judge Barrett’s unmistakable and undeniable qualifications, in addition to her commitment to conservative jurisprudence, she is well qualified to join the United States Supreme Court. While we agree that Judge Barrett is indeed a role model for women and girls, much more importantly, she is the best person for the job.

But while we think the fact that she is a successful judge who has built a remarkable career while also raising a large, loving family with her husband should be considered another asset in her nomination, the Left is attempting to disparage it as a liability. The implication her critics are using is that either she’s too busy raising all those kids to do her job, or else she’s a neglectful mother choosing career over family – both of which seem quite absurd in the light of reality.

In fact, it’s actually hard to fathom that in 2020 we have to defend the ability of women to have successful careers in any field and maintain a loving, traditional home. And yet, here we are. One such implication came from a writer for the New York Times magazine and Vanity Fair, who tweeted:

I guess one of the things I don't understand about Amy Comey [sic] Barrett is how a potential Supreme Court justice can also be a loving, present mom to seven kids? Is this like the Kardashians stuffing nannies in the closet and pretending they've drawn their own baths for their kids

This is what it’s come down to? Attacking Judge Barrett for having children. For being a career woman with a family. It’s pathetic. Unfortunately, it’s not the worst of the mud being slung her way.

The depths to which some on the Left are stooping, bringing up unfounded questions of supposed racism while pointing to a seemingly contradictory reality, is truly a new low, especially at a time when so many seem to pay more attention to buzzwords than actual facts.

Ibram Kendi, a professor at Boston University, chose the occasion of Judge Barrett’s nomination to tweet a diatribe about how White people who adopt Black children are essentially racist. According to Kendi’s post:

Some White colonizers 'adopted' Black children. They 'civilized' these 'savage' children in the 'superior' ways of White people, while using them as props in their lifelong pictures of denial, while cutting the biological parents of these children out of the picture of humanity.

He went on to say:

And whether this is Barrett or not is not the point. It is a belief too many White people have: if they have or adopt a child of color, then they can't be racist.

So basically what he’s saying is:  I have no evidence she’s racist, and in fact it looks like she’s not a racist, but she’s probably a racist anyway – regardless of the fact that there is nothing in her record to back up such a claim. And her personal life seems to reflect otherwise as well.

It’s a truly reprehensible attack. If this is how Kendi conducts himself in the classroom, Boston University should carefully examine his record and role at the school.

There was no reason for Kendi to even mention Judge Barrett’s name. Oh wait, yes there was. He’s promoting a book (ironically about how to be anti-racist, which he clearly failed to do here) – a book most Americans would never have known about until he decided to utilize the biggest story of the moment to draw attention to himself. Now he’s made the international news cycle, for a day or two, with his racially charged non-statement.

The examples of depraved attacks by the Left are boundless.

As an adoptee, I need to know more about the circumstances of how Amy Coney Barrett came to adopt her children, and the treatment of them since.

Transracial adoption is fraught with trauma and potential for harm, and everything I see here is deeply concerning. 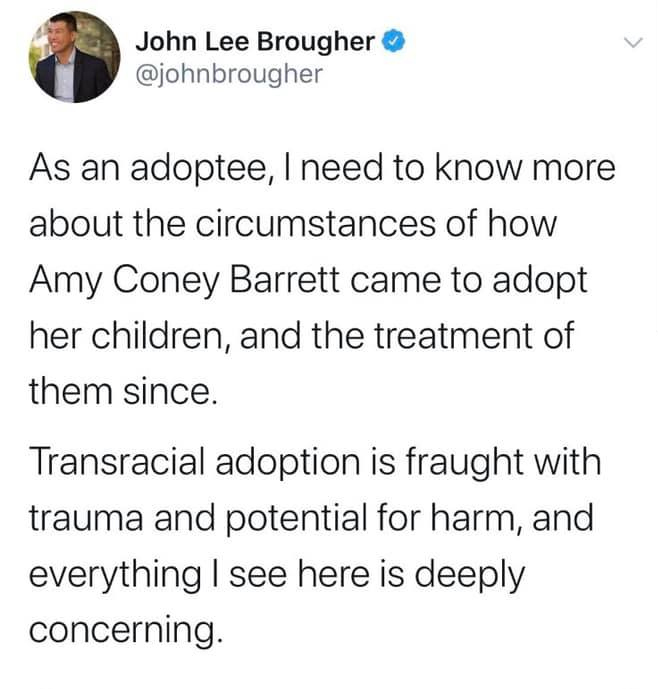 Trump and Barrett using her Black children and child with Down syndrome to score political points isn’t surprising, but it’s no less appalling. 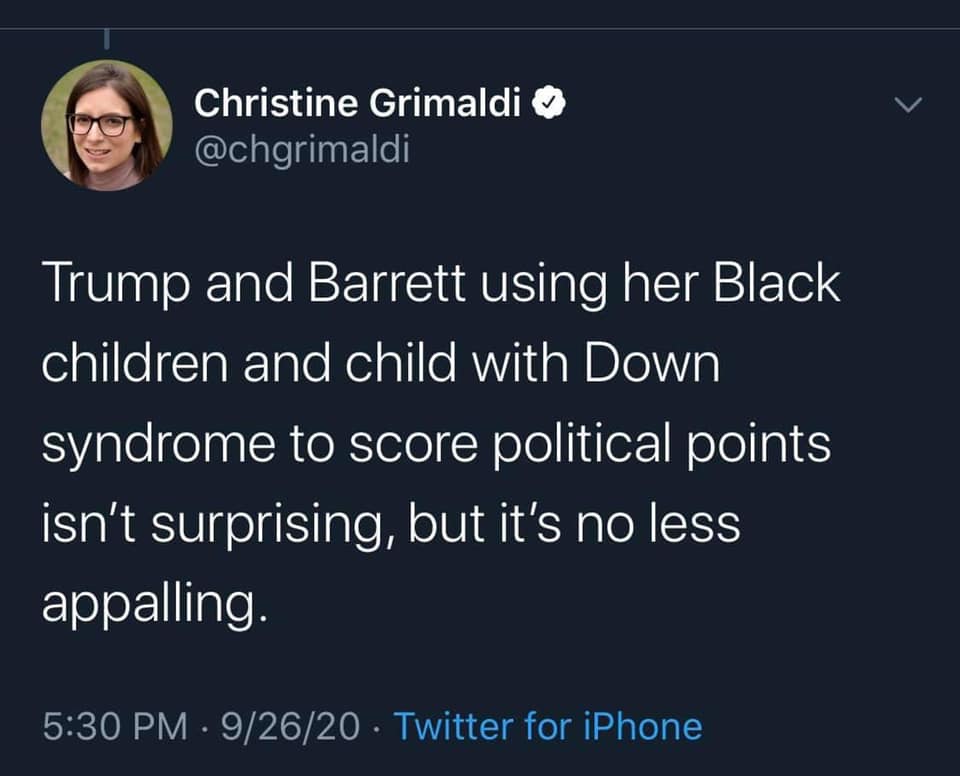 Another radical Left site stooped to this new low: 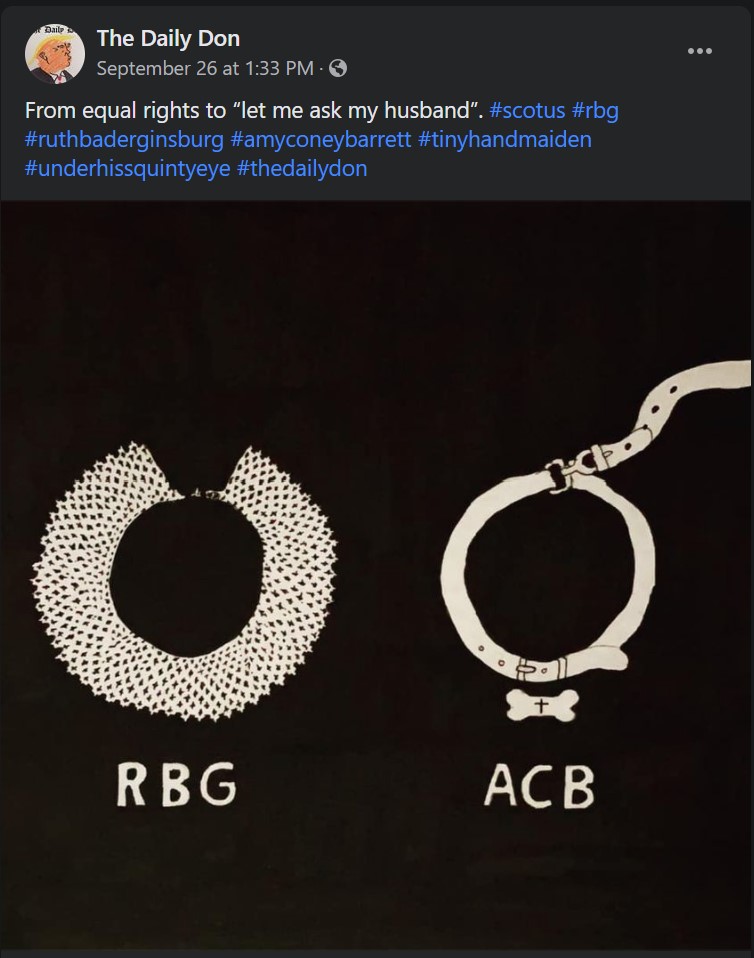 It’s sick, and no judge should be put through this baseless and deranged line of attacks.

But the attacks aren’t just from left-wing activists and the media, and they aren’t just directed at her family; U.S. Senators have already directly attacked her Christian faith. Remember, when President Trump nominated her for her current job as a judge on the Seventh Circuit Court of Appeals; we detailed at the time:

Think about that for a minute. Two senior U.S. Senators attacked a Christian woman’s faith in an open hearing, mocking her beliefs and outright insinuating that she was unfit to serve on the bench because she dared to be a Christian.

Perhaps these disgusting attacks should be no surprise. There’s little factual criticism to be pulled from Judge Barrett’s career.  She abides by the Constitution, not her own personal agendas, unlike most of the muckrakers currently reaching for anything sensational to sling into the media about her, with no concern for the lack of truth behind much of it.

Even the Wall Street Journal said of her record:

It speaks volumes that the early opponents of Judge Amy Coney Barrett’s confirmation have almost nothing to say about the work that has defined her career. Her scholarly and judicial writings place her at the center of the mainstream consensus on the judge’s role as an arbiter, not a lawmaker, who abides by the duty to enforce the law as written.

“A faithful judge resists the temptation to conflate the meaning of the Constitution with the judge’s own political preference,” she wrote in a 2017 article, shortly before she took the bench. That requires “fidelity to the original public meaning, which serves as a constraint upon judicial decision making.” Judging also requires humility, to guard against “the feeling of infallibility” that often tempts judges to stray from the law. After all, “courts are not always heroes and legislatures are not always villains. They are both capable of doing good, and they are both capable of doing harm.” Ultimately, “the measure of a court is its fair-minded application of the rule of law.”

The Wall Street Journal’s profile concluded of her: “Judge Barrett’s body of work shows her to be independent, discerning, diligent and fair. That’s why her opponents are likely to resort to personal attacks.”

Sadly, they are doing just that. But they will not succeed. Even their personal attacks seem empty. Judge Barrett is eminently qualified to sit on the Supreme Court. And while in a world of mature adults, she wouldn’t have to, Judge Barrett can weather the mudslinging of the Left. The Senate has promised a quick, expedient confirmation hearing, and it has the votes to confirm her.

We need a constitutional conservative jurist to fill this Supreme Court vacancy. Amy Coney Barrett is that jurist.

Stand with us and tell the Senate to confirm her to the Supreme Court without delay.