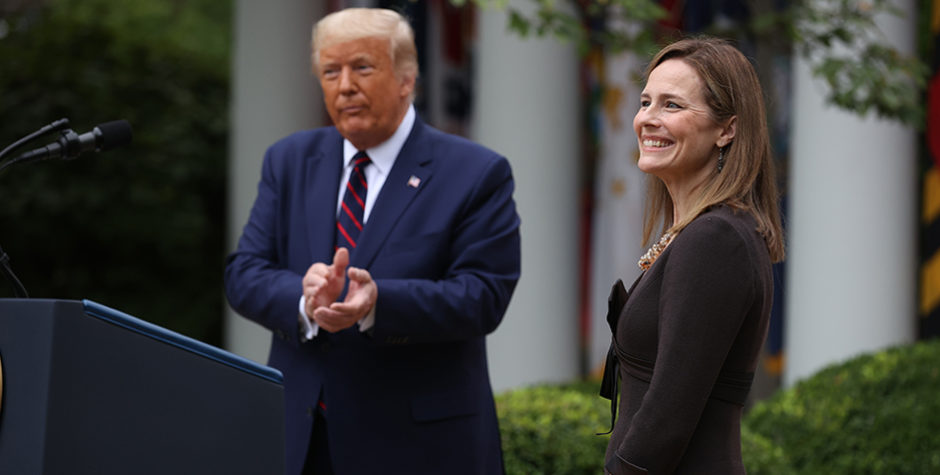 The President Defends the Constitution With Supreme Court Nomination

Fulfilling one of his “highest and most important duties,” President Trump has nominated Amy Coney Barrett, who is currently serving as a Judge for the U.S. Court of Appeals for the Seventh Circuit, to the U.S. Supreme Court. A careful review of Judge Barrett’s judicial opinions, academic writings, and testimony before the Senate Judiciary Committee as a nominee for the Seventh Circuit Court of Appeals confirms her strong commitment to originalism and textualism that mirrors the views of her mentor, the late Justice Antonin Scalia.

After graduating first in her class from Notre Dame Law School, where she served as executive editor of the Notre Dame Law Review, Barrett served as a law clerk to Judge Laurence Silberman of the United States Court of Appeals for the District of Columbia Circuit. She then spent a year as a clerk to Associate Justice Antonin Scalia of the Supreme Court of the United States.

Given this impressive record, and given that Judge Barrett has been recently confirmed by a bipartisan Senate majority, she should be confirmed and sworn in as an Associate Justice of United States Supreme Court without delay. This conclusion is corroborated by virtue of her decision-making in the almost 100 cases she participated in since joining the Seventh Circuit. Her participation and her decision-making corresponds with the conclusion that she remains forthrightly a conservative jurist who believes in the text of the Constitution. She has demonstrated beyond question that she is unafraid of going where the law directs her as opposed to being driven by her personal preferences.

Even Harvard Law professor Noah Feldman agrees with the view that Judge Barrett deserves a seat on the Court. While he disagrees with much of her judicial philosophy, he agrees she is a brilliant and conscientious lawyer who will analyze and decide a case in good faith while applying the jurisprudential principles to which she is committed. Only an unprincipled politician who has surrendered to Left-wing dogma living loudly within him could disagree with professor Feldman’s assessment. It is therefore easy to see why President Trump said that “‘there is no one better’” to “‘preserve our priceless heritage of a nation of laws.’”

Consistent with Judge Barrett’s belief that she is bound by the text of the Constitution and the original intent of the Founders, her recent opinions in a number of high-profile cases demonstrate her fidelity the rule of law.

Given Judge Barrett’s unmistakable and undeniable qualifications, in addition to her commitment to conservative jurisprudence, she is well qualified to join the United States Supreme Court. While we agree that Judge Barrett is indeed a role model for women and girls, much more importantly, she is the best person for the job.