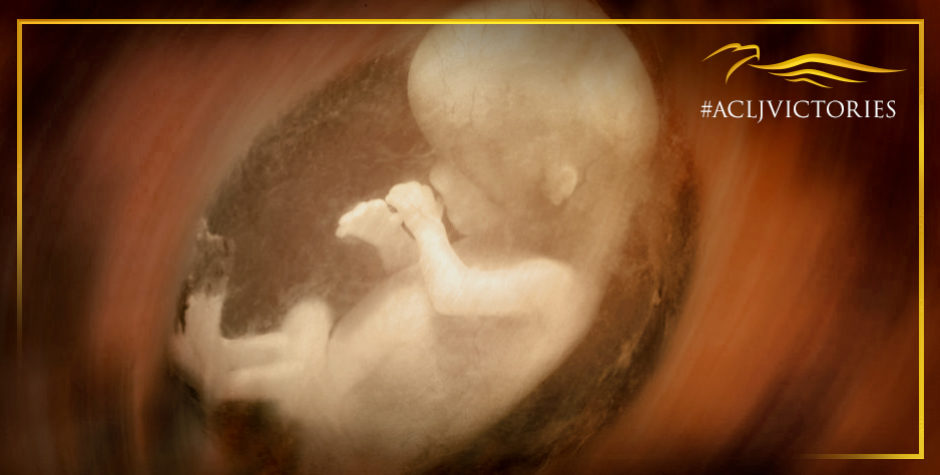 This is the first installment of our year-end victories series looking back at some of the numerous victories by the ACLJ in 2019.

This year we scored a massive win in our ongoing fight for life.  The Department of Health and Human Services (HHS) under President Trump ended an alarming contract between the National Institutes of Health (NIH) and a California university that involved using aborted babies in medical research.

In what sounds like awful science fiction, NIH had hoped to create “humanized mice” for experimentation from the tissue of aborted babies.  Let me say it again: humanized mice.

At the beginning of the year, we told you that we had issued a Freedom of Information Act (FOIA) request to discover more about this unsettling experimentation being conducted by NIH, which had contracted with University of California San Francisco (UCSF) to “obtain the body parts from unborn babies to make at least two types of ‘humanized mice.’”

When the ACLJ caught wind of this disgusting contract, we immediately initiated a legal advocacy campaign obtaining over a hundred-thousand petition signatures demanding an end to these ghoulish practices. We also filed a Freedom of Information Act (FOIA) request in order to expose and put an end to this horror.

In a huge victory, HHS agreed with us, and officially shut down this twisted experimentation – soon after receiving our FOIA request.

As we told you earlier this year, this move by HHS was crucially essential for six reasons:

First, it canceled the contract that funded experimentation using aborted babies’ body parts that we had been targeting with our FOIA. That’s a win in and of itself.

Second, and more importantly, it set a policy of no longer doing any experimentation within NIH using the body parts of babies obtained from an elective abortion. It ends the practice inside the government for good.

Fourth, HHS will prioritize funding for ethical research (not using aborted babies) which had largely been ignored in the past.

Fifth, it will issue new rules that will put in place clear, ethical guidelines for the use of any human tissue in medical research.

Sixth, it sets the tone of life. As we fight Planned Parenthood and the entire abortion industry over the sale of, and experimentation on, aborted babies, the federal government has now made clear that it will no longer participate in this practice because it’s just plain wrong.

And this monumental decision by HHS came shortly after another of our advocacy campaigns helped urge the Administration to cancel a similar contract between the FDA and an abortion related business that had been referred for criminal investigation for participating in the illegal sale of aborted babies’ body parts.

If abhorrent contracts like these are allowed to persist, there’s a grim reality that it could create a grotesque market demand – directly leading to a need for more aborted babies’ body parts. It could also lead to even more extreme late-term abortion legislation like the horror-show we witnessed in New York early this year when the city lit up the spire of One World Trade Center – a monument to all who died on 9/11, including unborn babies – pink to celebrate a new law that allowed for more babies to be killed through abortion, right up to the moment of birth.

Unborn babies are not a commodity for profit. They are innocent human lives, and experimentation like this puts them at additional risk, encouraging more abortions. We applaud this action by HHS, for not only ending this unconscionable contract, but for deciding to carefully examine any other contracts for similar research.

We will not allow the abortion lobby to manipulate the laws to fulfill some ghastly form of supply and demand. Without you standing alongside us in the fight for life, this disgusting abuse of our tax dollars could have continued for years to come.

We will continue to fight extreme abortion laws in the new year. We will fight defund taxpayer supported abortion on demand. And we will save countless innocent babies.

We just need you with us.

To help the ACLJ continue to have the resources we need to make these victories possible and continue defending unborn babies and defeating the abortion industry’s grip on our tax dollars, please consider making a Tax-Deductible donation to the ACLJ through our year-end Matching Challenge. Your gift will be DOUBLED dollar-for-dollar through the end of the year.