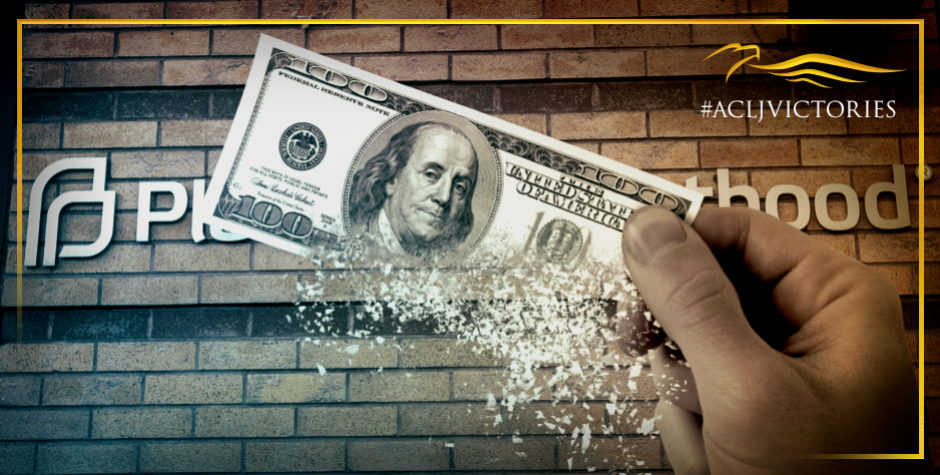 This is the latest installment in a year-end series looking back at some of the numerous victories by the ACLJ in 2019.

This year, the ACLJ helped to deliver a “devastating” defeat to Planned Parenthood and other abortion businesses through a new rule blocking millions from abortion providers.

We submitted public comments supporting a new Department of Health and Human Services (HHS) rule that defunded as much as $60 million of our tax dollars from Planned Parenthood and other abortion providers. But it wasn’t just us.

We asked ACLJ members to take action and submit their own comments. In an astonishing response, ACLJ members submitted over 13,000 individual comments, accounting for more than 10% of all comments received by HHS.

Our combined voices were too strong to be ignored.

Despite pro-abortion states’ legal actions to block it, the new HHS rule blocking millions of tax dollars under Title X from abortion providers has now gone into effect.

HHS set a timeline for abortion businesses who have exploited loopholes to use tax dollars through Title X to fund their abortion empires – like Planned Parenthood – to make necessary operational changes, and show significant steps toward compliance.

However, Planned Parenthood announced that it would not comply, withdrawing from the program and forgoing all $60 million it normally received from Title X, rather than separate abortion from its other services. This move revealed the organization’s true priorities.

But we had to engage in a fierce legal battle to obtain this tremendous result. Planned Parenthood and more than 20 states’ attorneys general sued to stop the new rule. But the 9th Circuit Court of Appeals rejected their request for an emergency stay, after it also temporally blocked injunctions ordered by lower courts in California, Oregon, and Washington – agreeing with our amicus briefs.

We call it a monumental victory for life and ACLJ members were directly instrumental in achieving it.

But this win is only the beginning. There’s much more work to be done. Planned Parenthood receives over $500,000,000 of your tax money every year, even while reporting record profits.

The ACLJ is dedicated to eliminating taxpayer supported abortion on demand, and fighting for unborn babies.

To help the ACLJ continue to have the resources we need to make these victories for life possible, please consider making a Tax-Deductible donation to the ACLJ through our year-end Matching Challenge.

Your gift will be DOUBLED dollar-for-dollar through the end of the year.