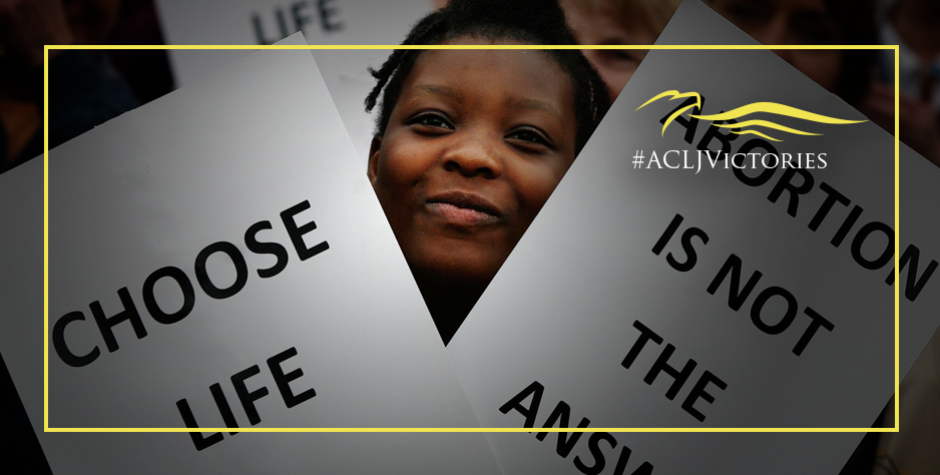 2017 Victories: Defending Unborn Babies One Life at a Time, State by State

This is the latest installment in a year-end series looking back at a few of the numerous victories by the ACLJ in 2017.

The voice of the voiceless unborn is beginning to be heard in state after state.

This year the ACLJ was involved in several noteworthy victories as our pro-life legal, policy, and government affairs teams continue to work with state legislatures across the country to craft common-sense legislation to protect life and to ensure the protection of pro-life advocates’ First Amendment free speech rights.

In Maryland’s state capital, the ACLJ gave witness’ testimony defending the constitutionality of bills banning late-term abortions and banning dismemberment abortions. These procedures are currently legal in Maryland, and their state legislature is currently considering bills to confront some of these ghoulish abortion procedures.

The ACLJ also legally took on the states of Illinois and California over their brazen attempts to force pro-life groups to promote abortion – the very thing to which they religiously object. We filed an amicus brief, asking the federal court to halt the implementation of an amendment to the Illinois Health Care Right of Conscience Act (“HCRCA”) requiring pro-life pregnancy centers to promote abortion. In a clear victory, a federal judge agreed with our argument blocking this unconstitutional anti-life regulation.

In a similarly shocking case of the abortion distortion, the State of California attacked pro-life pregnancy centers through the “Reproductive FACT Act,” which required them, under pain of financial penalties, to provide government-crafted, pro-abortion messages, including advertising free or low-cost abortions paid for by the State (i.e. taxpayers) – even if speaking that message violates their moral and religious beliefs. We filed a direct lawsuit challenging this unconstitutional act. In a resounding pro-life victory, a California state court ruled that such a pro-abortion law blatantly violates California’s constitution.

This is a major victory in state court, but now we have a similar case pending before the U.S. Supreme Court.

The ACLJ filed a cert petition with the U.S. Supreme Court, asking it to reverse the erroneous decision of the Ninth Circuit that held that the FACT Act does not violate the First Amendment. Through this legal action, we are seeking to vindicate the free speech rights of our clients in federal court and challenge this unconstitutional act.

The Supreme Court has just agreed to take up a companion case. In agreeing to hear this challenge, the U.S. Supreme Court will now decide whether to protecting the First Amendment rights of pro-life pregnancy care centers to speak to their clients free from government coercion. We are preparing a critical amicus (friend-of-the-court) brief in this vital Supreme Court case that could save countless lives.

With your support, we’ve successfully been fighting against these pro-abortion laws across the country. But the fight is not over. Your continued support is vital to defeat Big Abortion and protect life.

You can read more in the ACLJ’s 2017 Victories series here.