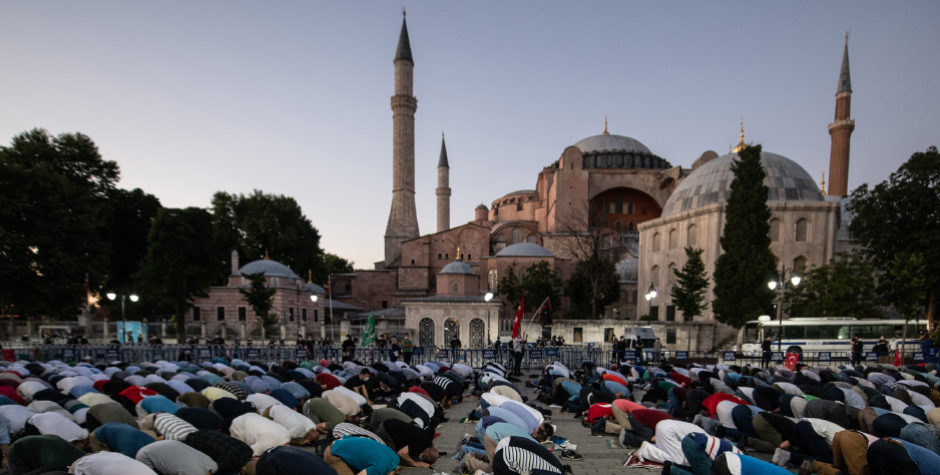 Turkey Orders Hagia Sophia be Reconverted into an Islamic Mosque

Turkey’s President Erdoğan just ordered a historic 1,500-year-old Christian church be reconverted from a Museum into a functioning Islamic mosque.

Hagia Sophia (named after God’s Holy Wisdom) in its original form was built by Emperor Constantine as a Christian church sometime around the year 537AD, about 500 years after Christ himself walked among us. It was rebuilt two centuries later after a devastating fire and stood as an Orthodox Christian church. Even though it has been out of the control of the Orthodox Church for nearly 600 years and has been used as a museum since 1934, it remains not only an architectural marvel but a testament to the glory of Jesus Christ and a powerful symbol of Byzantium and its legacy for global Orthodoxy. It is currently a designated UNESCO World Heritage Site.

President Recep Tayyip Erdoğan issued a decree Friday ordering Hagia Sophia to be opened for Muslim prayers, an action likely to provoke international furor around a World Heritage Site cherished by Christians and Muslims alike for its religious significance, for its stunning structure, and as a symbol of conquest.

The presidential decree came minutes after a Turkish court announced that it had revoked Hagia Sophia’s status as a museum, which for the last 80 years had made it a monument of relative harmony and a symbol of the secularism that was part of the foundation of the modern Turkish state.

This move could be considered an instance of history repeating, as the historic church was conquered by Muslims and converted to a mosque in the 1400s.

The church is itself an historic marvel. It was built in 537AD by 10,000 workers on the order of the Byzantine Emperor Justinian. It immediately became the foremost cathedral in the imperial city of Constantinople and the entire Christian world, east and west. Emperor Justinian stated that, as a cathedral, it was “one that has never existed since Adam’s time, and one that will never exist again.”

The present structure was the largest religious structure in the world when it was built. This remained true until the completion of the current St. Peter’s Basilica in Rome during the 16th century. Historians of science are still puzzled by how 6th century engineers would be able to build such a large dome without modern tools such as steel and calculus.

Historically it has served as the primary site of Byzantine religious, imperial, and diplomatic ceremony. It is the cathedral church of the Ecumenical Patriarch. After the 8th century, it became the site for crowning new emperors. It has been the site of royal weddings, diplomatic baptisms, signing of treaties, and more, as documented in the 9th century document Book of Ceremonies.

Throughout its storied history, Hagia Sophia has been in different hands over the centuries:

As a museum, Hagia Sophia presented Christian history to the entire world, opening a dialogue between people of all faiths. But the Christian frescos that adorn its walls are about to be strategically covered up. It has already been announced they will be covered with curtains during prayer because Islamic law forbids images of people.

Erdoğan claims the doors will still be open to Muslims and non-Muslims, but what are the odds that tourists will flock to an active mosque? It seems more likely that now the famed church and the Turkish government’s re-appropriation of it are meant to serve as a symbol of Islamic conquest. Even an official from neighboring Greece called the move “a direct challenge to the entire civilized world.”

Imagine if any foreign leader announced that it was seizing a Muslim mosque and converting it to a Christian church. There would likely be zero-tolerance from the Muslim world. And yet Erdoğan made it clear he rules over Turkey, including Turkish Christians, with impunity, almost provoking Western leaders to challenge him, stating:

[T]he way Hagia Sophia will be used falls under Turkey's sovereign rights. We deem every move that goes beyond voicing an opinion a violation of our sovereignty.

And this is not the first time under Erdoğan that Turkey has taken possession of Christian churches. As the New York Times reported in 2016:

The Turkish government has seized the historic Armenian Surp Giragos Church, a number of other churches and large swaths of property in the heavily damaged Kurdish city of Diyarbakir, saying it wants to restore the area but alarming residents who fear the government is secretly aiming to drive them out.

Turkish tourism companies have built a lucrative industry exploiting “Christian tourism.” Yet it’s very clear the Turkish government has no respect for Christianity or its history. In fact, it’s clear Turkey has blatant disdain for the Christian faith.

The ACLJ has direct experience with Turkey’s contempt toward Christians. Two years ago, when we fought to obtain Christian Pastor Andrew Brunson’s freedom from a Turkish prison, we told you that the indictment against him called “Christianization” – preaching the gospel – an act of terrorism.

As we reported then, the indictment included accounts from so-called “secret witnesses” who claimed Protestant Christians believe that “President Erdoğan is the antichrist” and that American Protestants believe a war will be initiated by Israel, and that, as Christians, we believe “all humans are slaves of the sons of Israel and Protestants.”

This was, at best, a gross mischaracterization of Christianity. But if this is the accepted attitude about the faith, it certainly falls right in line with converting a historic Christian site into a mosque.

The move to claim Hagia Sophia for Islam is only the latest, but perhaps most grand incident by Turkey, under President Erdoğan to express a clear animosity toward Christianity. Harassing and imprisoning Christians. Commandeering Christian churches. It all begs the question, what is Turkey’s endgame? Is this a targeted campaign to drive Christianity out of the country altogether?

As of now, Hagia Sophia will reopen as a mosque on July 24th.

The ACLJ will continue to closely monitor Turkey’s actions against Christians and Christian churches, and we are already mobilizing our legal and Government Affairs teams to protect this historic Christian church. We have stood before the U.N. before, delivering critical oral and written submissions, regarding Turkey’s violations of its U.N. charter and its own constitution which both demand it respect and protect religious freedom.

This article was co-authored by ACLJ Executive Director Jordan Sekulow.