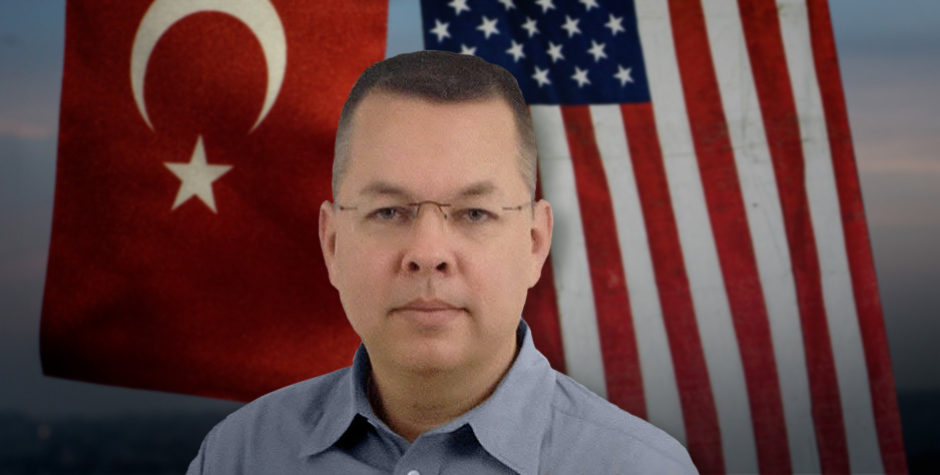 Turkey is holding innocent Christian Pastor Andrew Brunson hostage in direct defiance of the United States and those around the world who believe in and support religious freedom.

Pastor Andrew has received no true justice in Turkey’s court system. His most recent appeal was once again arbitrarily rejected.

We need the international community to stand together and tell Turkey enough is enough.

The ACLJ, through its affiliate the European Centre for Law & Justice, just filed a critical submission with the U.N. Human Rights Council urging the Council to take action.

The U.N. has long stood to protect the human rights of all people. In intervening on behalf of Pastor Brunson, the U.N. will once again demonstrate its commitment to ensuring that freedom of religion exists for all people, regardless of their faith.

Pastor Andrew is innocent. He’s now been detained by Turkish authorities for close to 700 days. We reported that he was recently released from the prison where he was being held and remanded to house arrest in Turkey to await further legal proceedings. But it’s not enough. Pastor Andrew is an innocent man who is now forced to wear an ankle bracelet, prohibited from leaving his apartment, and banned from leaving Turkey.

He is a father and a husband, and he is being held as a political prisoner because of his Christian faith.

His wrongful detention and entire trial have been a complete sham. As we detailed in our submission:

On 9 December 2016, he was transferred to a prison facility as a suspect of alleged ‘membership in an armed terrorist organization’, despite no evidence having been presented to justify the accusations against him. Turkey repeatedly denied Pastor Brunson’s appeals for release, and no indictment was handed down until March 2018. The indictment against Pastor Brunson was 62 pages long, wholly lacking in merit, and provided no evidence regarding criminal action against him, only including hearsay from secret witnesses.

16 April 2018 was the first day of Pastor Brunson’s trial. It lasted thirteen hours and was filled with video testimony of secret prosecution witnesses whose appearances and voices were disguised almost to the point of their testimony being indecipherable. At the conclusion, the 3-judge panel of Turkish judges refused to release Pastor Brunson and ordered that he be returned to prison.

7 May 2018 was Pastor Brunson’s second day of trial. It lasted eleven hours, and again involved only prosecution witness testimony. Two of the seven witnesses brought by the prosecution were secret, and all seven of the witnesses testified that they had not personally seen or heard Pastor Brunson do anything that would substantiate the charges against him. Their testimony was completely hearsay and conjecture. Pastor Brunson’s Turkish attorney objected to the testimony of one of the witness against Pastor Brunson by pointing out that the witness had been convicted on 14 separate counts of fraud; however, the lead judge claimed that fact was not relevant and stated that all the prosecution witnesses’ statements would be taken as fact.

18 July 2018 was Pastor Brunson’s third day of trial, again involving secret prosecution witness testimony. The day concluded mid-afternoon after the court heard two prosecution witnesses and only allowed one defence witness to testify and whose testimony was essentially disregarded. Pastor Brunson was yet again remanded back to prison, and the judges yet again have delayed Pastor Brunson’s trial by setting the next date for nearly three months later on 12 October 2018. Shortly after his third trial date, Pastor Brunson was abruptly moved from Turkish prison to house arrest in Turkey, where he is confined to his apartment and banned from leaving the country.

Turkey is violating its own constitution as our submission reiterated:

One of the hallmarks of Turkey’s proud history is the respect for all faiths and the rule of law. Thus, Turkey should respectfully be reminded of its continuing obligations under its constitution as well as the ICCPR, UDHR, and ECHR to respect and value the freedom of religion and rule of law. The ECLJ urges this Council to call upon Turkey to honour its obligations.

President Trump has remained actively involved in Pastor Andrew’s case, and has directly called for Turkey to stop this unjust abuse of an innocent U.S. citizen. He has rejected their outlandish demands.

We recently reported how the President warned Turkey of even tougher sanctions if “our wonderful Christian Pastor” is not released and safely returned home to America.

Our submission strongly requests that the United Nations intervene on Pastor Andrew’s behalf.

The ECLJ is aware that the U.N. Working Group on Arbitrary Detention has begun an investigation of Pastor Brunson’s case . . . . The ECLJ is grateful for the Working Group’s attention to this matter, and further requests that the U.N. continue to make every effort to ensure that Pastor Brunson is not only treated with great care, but that he is quickly released back to the United States without injury or delay.

Pastor Andrew has said: “I desperately miss my wife and children. Yet, I believe this to be true, it is an honor to suffer for Jesus Christ, as many have before me. My deepest thanks to all those around the world who are standing with and praying for me.”

Pastor Andrew and his family have suffered enough. We will aggressively continue to fight across the globe – urging the entire world to put maximum pressure on Turkey – until he is home with his family once again.

He needs you in the fight. Join with nearly 600,000 supporters and sign our petition demanding Pastor Andrew’s freedom.