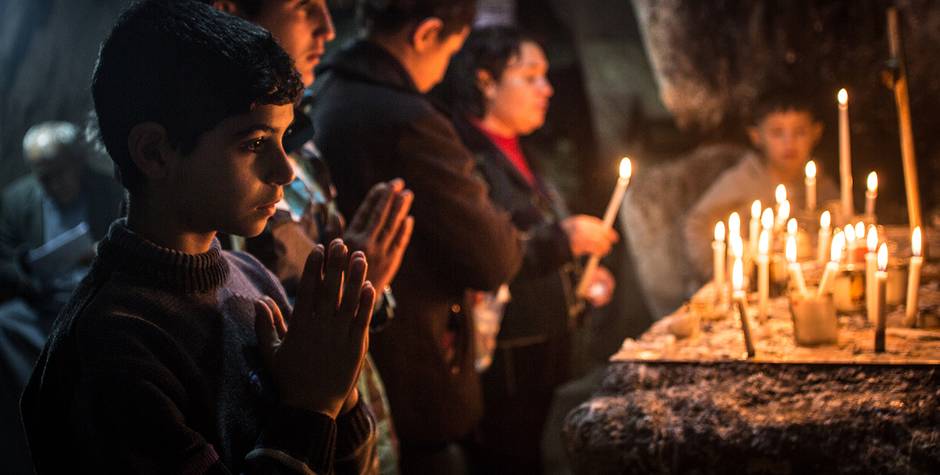 The Jihadist War Against Christianity

The Jihadist War Against Christianity

To hear President Obama and many other leftist luminaries talk, one might conclude that we have a real problem with Islamophobia. Following the attacks of 9/11, even then-President George Bush repeatedly stated that we were not at war with Islam in order to counter the potential for widespread fear and loathing of Muslims in western society. The repeated violent attacks by radical Islamic jihadists over the last fifteen years at home and abroad only served to further stoke the fears of a widespread backlash against all people of the Islamic faith. The fear that innocent, peace-loving Muslims would be singled out for reprisals influenced even various U.S. government agencies as they purged their training materials from even referencing “radical Islamic terrorism” or anything related to the radical religious ideology of jihad.

For anyone to single out a Muslim for persecution or attack based on their faith is absolutely unacceptable and should not be tolerated. While there may be a relative few who hold extreme positions against all people of the Islamic faith—in fact, the feared widespread plague of Islamophobia simply hasn’t materialized. While the instances in which Muslims are harassed for their faith or mosques are vandalized should be denounced in our country that has always valued religious plurality, we should also realize that there is not any systematic, state-sponsored persecution of Muslims.

What our world does currently face is a historic problem of genocide against Christians and other religious minorities. The report Genocide Against Christians in the Middle East states that the murder of Christians is commonplace in Iraq, Syria and Libya. The watchdog group Aid to the Church in Need recently released its 2016 report “Religious Freedom in the World.” Out of the 196 countries the report examined, 38 showed “unmistakable evidence” of religious freedom violations; twenty-three of those countries were placed in the top-level “Persecution” category, for their atrocities committed against Christians. The nations branded so extreme that “it could scarcely get any worse” were: Afghanistan, northern Iraq, Nigeria, North Korea, Saudi Arabia, Somalia, and Syria. The clampdown on underground churches in Iran shows no sign of letting up in that Shi’a Muslim country.

In Pakistan, even a false accusation of blasphemy can cost you your life. The ACLJ is working to save the life of Asia Bibi, who faces the death penalty in Pakistan, for this very reason. In Sudan, we are working to save the life of Christian pastors who face possible death for their Christian faith. While one of them was recently released, another still stands trial, facing a potential death sentence, merely because of his Christian faith.

Release International reports that attacks against Christians have increased dramatically by Hindu militants in India. China is renewing its pressure on unregistered churches. Heavily armed militants in Nigeria seek out Christians for violent attacks. In Russia, it has become increasingly difficult to share one’s Christian faith anywhere outside of a church building.

ISIS (The Islamic State) has targeted Christians in Iraq and Syria with the ancient dictum of Islam: They must “convert, pay a tax, or die by the sword.” The Syriac Catholic Patriarch of Antioch reported that over 500 Christians were killed by ISIS as it took control of Mosul. Patriarch Younan estimates the number of Christians killed by roving Islamic gangs at more than a thousand. At least 125 church buildings have been destroyed or seized in Syria and Iraq.

The United States, Britain, the European Parliament, and the United Nations High Commissioner for Human Rights have declared that ISIS’s actions against Christians, Yazidis and other religious minority groups as “genocide.” However, it is not only ISIS that routinely denies Christians their basic human rights. Nation-states routinely outlaw Christianity, making it so that attending a secret meeting of fellow Christians could cost you your freedom, or even your life. Iran and Saudi Arabia are notorious for this type of suppression of Christianity.

The group Open Doors Germany did a survey among 843 Christian refugees living in a German refugee camp. Of them, 83% (615) reported assaults against them by other refugees; 42% (314) reported death threats; and 6% (44) claimed to be victims of sexual assault. Regrettably, the report stated that 91% of the attacks (674) against these Christians were committed by fellow refugees who were Muslim.

The previously referenced report “Religious Freedom in the World” concluded: “A virulent and extremist form of Islam emerged as the number one threat to religious freedom and was revealed as the primary cause of persecution in many of the worst cases.”

While I would adamantly defend the religious rights of all Muslims, we do not really have a widespread problem of Islamophobia around the world. If anything, we have a worldwide problem of “Christian-phobia.” Much of the persecution of Christians in the Muslim world is connected to the perception that Christians love the Jewish people and are supportive of the nation of Israel.

The global issue affecting millions of people and making the world less safe for freedom of belief and pluralistic, diverse communities is the systematic and ongoing attacks against Christians and Jews. Out of the 2.2 billion Christians in the world, it is estimated that 200 million face persecution simply because of their faith. Last month, Pope Francis said the Church has more martyrs today than the early Church did. “But why does the world persecute Christians?” the pontiff asked. “The world hates Christians for the same reason it hated Jesus: because he brought the light of God and the world prefers darkness to hide its wicked works.”

We must call it what it is. It is a new era of Christian persecution by both state and non-state actors. In many places, it is outright genocide.

At the ACLJ, we are taking action to stop the genocide of Christians. Sign the petition and help us as we work to protect religious freedom and to stop Christian genocide.