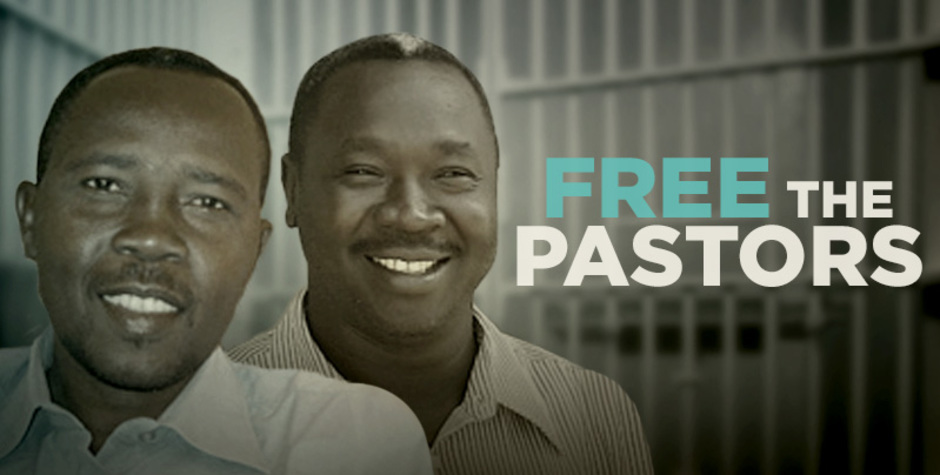 Two Christian pastors are currently on trial in Sudan because of their Christian faith.  Rev. Hassan Abduraheem and Rev. Kuwa Shamal have been held in extremely poor conditions for nearly a year as they face false charges brought against them by Islamic security forces in Sudan.

In November 2015, Rev. Hassan Abduraheem and Rev. Kuwa Shamal attended a Christian conference in Addis Ababa, Ethopia where Rev. Abduraheem was a speaker. During his speech, Rev. Abduraheem showed the audience a picture of a young man who had been badly beaten for attending a demonstration, and explained that he was helping pay for his medical treatment.

The Sudanese government, however, claimed that anyone who provided humanitarian aid to this individual had committed a national security crime.

In December 2015, Sudan’s National Intelligence Security Service (NISS) arrested the pastors on national security charges associated with helping the injured man. Rev. Shamal was conditionally released several weeks later, but throughout his conditional release, he was often required to report to the NISS offices at 8 am and held until midnight.  Rev. Shamal was re-arrested in May 2016 and remains in prison in horrible conditions along with Rev. Abduraheem to this day.

They are now on trial because of their Christian faith, all because they provided humanitarian aid to someone in need.

The lives of Rev. Shamal and Abduraheem hang in the balance.  Both men are facing the death penalty if they are convicted.   They have been charged as co-offenders under Sudan’s Penal Code of 1991, with charges ranging from waging war against the state and espionage to agitating hatred between classes.

In reality, these two pastors are being targeted for their Christian faith.  They are being held in horrible conditions on trumped-up charges and face possible death sentences because of their Christian faith. Many Sudanese Christians have faced this same persecution, including Pastors Michael and Peter and Mariam Ibraheem.  When you spoke out on their behalf and we led international legal and advocacy efforts, they were freed and their lives were saved.

The trial of the pastors began in August and is still underway. We will keep you updated on the latest developments as we amplify your voice. Be heard today. Demand their freedom.