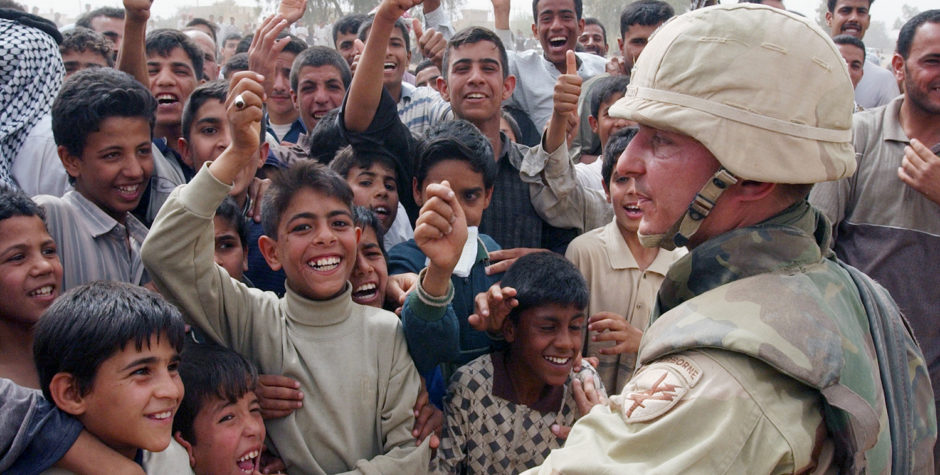 It may be the biggest step forward in our genocide campaign since the U.S. officially recognized the “genocide against . . . Christians.” The U.S. government has just secured a major concession from the U.N. allowing relief aid to be delivered directly to Christians and other religious minority victims of genocide in Iraq – something we have been aggressively advocating for since we began our genocide campaign.

As part of our ongoing advocacy campaign to provide relief to the victims of the ISIS genocide, we have sent numerous letters to key figures within the international community “urging recognition and declaration of the atrocities committed by ISIS against Christians as genocide, in order to trigger the provisions of the Genocide Convention and provide relief and aid to religious minorities facing genocide.”

On July 24, 2017, we sent letters to 12 nations, 10 of which had been directly affected by the ISIS Genocide, including the United Kingdom (U.K.).  In the letters we urged these world leaders to pressure the U.N. and provide relief for the victims:

The United Nations must stand against the evils of the ongoing genocide and use all available options to stop the genocide and protect the victims – by implementing appropriate penal tribunals, coordinating a more effective use of coalition military force, administering a more efficient delivery of aid, and providing meaningful in-region protection for victims such as the establishment of safe-zones.

On August 14, 2017 we received a response from the U.K., echoing our policy position:

I share your anger at the human suffering of Christians . . . in Iraq, Syria and the wider Middle East, many of whose communities have been devastated at the hands of [ISIS]. I want to see Christians and other minorities continuing to live, worship and prosper in the Middle East. We are doing all we can to make this happen – providing humanitarian assistance to all those who need it, including minority communities and consistently underlining with the region’s political leaders the importance of upholding freedom of religion and belief.

Then, in September of 2017, we delivered an oral intervention on behalf of the victims of genocide before the U.N. Human Rights Council:

The UN must stand against the ongoing genocide by implementing appropriate penal tribunals, coordinating a more effective use of coalition military force, administering a more efficient delivery of aid, and providing meaningful in-region protection for victims such as the establishment of safe-zones. The Charter of the United Nations demands no less.

Your voice is being heard. The world is listening. But more importantly, world leaders are taking action.

At a speech in October 2017, Vice President Mike Pence unveiled plans for a new policy that would provide aid directly to the persecuted Christians in Iraq. He stated:

We will no longer rely on the United Nations alone to assist persecuted Christians and minorities in the wake of genocide and the atrocities of the terrorist groups . . . . The United States will work hand in hand from this day forward with faith-based groups and private orgs to help those who are persecuted for their faith. This is the moment, now is the time, and America will support these people in their hour of need.

The Administration is delivering on this promise, and Christians facing genocide in Iraq will now be able receive this much needed aid.

Initially, the United States Agency for International Development (USAID) announced that it would provide a $150 million blank check to the United Nations Development Programme (UNDP) for the vague purpose of helping “stabilize Iraq after liberation of areas held by the Islamic State of Iraq and Syria.” However, this arrangement provided no assurances that the aid would actually go to those who need it the most – the victims of the ISIS genocide – making it an ineffective form of relief.

Thankfully, the Trump Administration has since negotiated a new deal – one that tracks closely with the ACLJ’s policy position. The new arrangement negotiated between the U.S. and the U.N. includes a requirement that the U.N. ensure that aid will directly “address the needs of vulnerable religious and ethnic minorities communities.”

In an effort to ensure that these funds are actually used for their intended purpose – helping  Christians, Yazidis, and other religious minorities – Tom Staal, a USAID Counselor, stated that USAID will be implementing various oversight measures and even as an agreement with the UNDP to allow for the U.S. agency’s Inspector General to access the UNDP’s books in order to provide for “more frequent, detailed reporting.”

This is a huge victory for Christians facing these atrocities in Iraq. It is also a massive step forward in accountability, as the U.S. will have direct access to and oversight of the U.N.’s aid operations as they relate to Christian genocide victims. This has been severely lacking until now. Much of the aid that has been delivered has been, thus far, diverted away from Christians.

This new arrangement will now ensure the aid that has been promised and the aid that they so desperately need actually reaches Christians and other religious minority victims. The Knights of Columbus described it as “the most positive American action on behalf of the[se] communities since 2003.” And indeed it is.

Now we are beginning the work of ensuring that these newly developed measures work as promised. We are preparing a new round of legal letters to U.S., U.N., and other international officials to ensure that this aid reaches and benefits Christians.

As we have said from the beginning of our campaign, our goal is 1) stop the genocide and 2) protect Christians. This new action through USAID, in cooperation and coordination with the U.N., is a key component of protecting Christians.

Join us in our fight as we continue to advocate on behalf of the thousands of Christians facing genocide at the hands of ISIS.

Add your name to our petition to stop the genocide and provide relief for our fellow Christians.