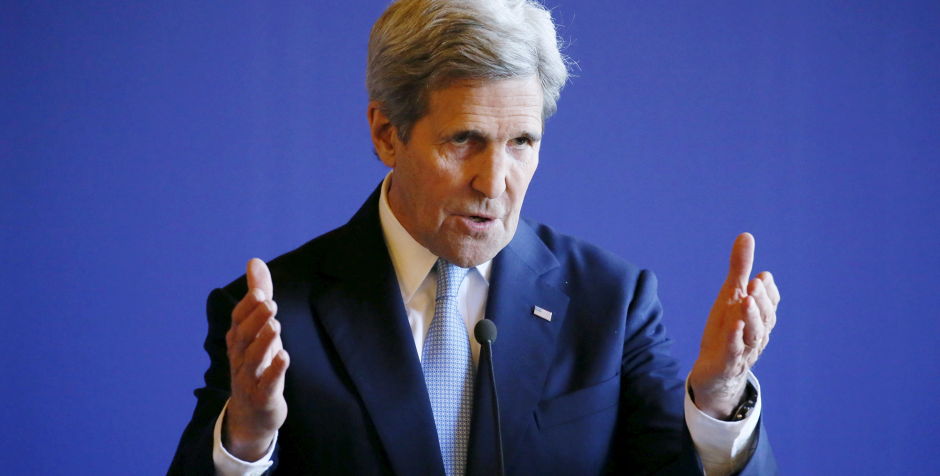 Today, Secretary of State John Kerry and the Obama Administration finally announced that ISIS – the Islamic State – is committing “genocide against . . . Christians” and other religious minorities in the Middle East.

This is a monumental step forward in the fight to defend Christians facing beheadings, torture, sexual enslavement, and other atrocities.

Worldwide, over 435,000 of you signed our petition and spoke out for our Christian brothers and sisters in the Middle East. And because you spoke out, the Obama Administration acted.

In his remarks declaring that ISIS is committing genocide, Secretary Kerry stated:

My purpose in appearing before you today is to assert that, in my judgment, Daesh is responsible for genocide against groups in areas under its control, including Yezidis, Christians, and Shia Muslims. Daesh is genocidal by self-proclamation, by ideology, and by actions – in what it says, what it believes, and what it does. Daesh is also responsible for crimes against humanity and ethnic cleansing directed at these same groups and in some cases also against Sunni Muslims, Kurds, and other minorities.

He went on to detail just a few of the countless atrocities committed by ISIS (which the Administration refers to as Daesh) against Christians and other religious minorities in the Middle East.

We know that in Mosul, Qaraqosh, and elsewhere, Daesh has executed Christians solely because of their faith; that it executed 49 Coptic and Ethiopian Christians in Libya; and that it has also forced Christian women and girls into sexual slavery. . . .

We know that in areas under its control, Daesh has made a systematic effort to destroy the cultural heritage of ancient communities – destroying Armenian, Syrian Orthodox, and Roman Catholic churches; blowing up monasteries and the tombs of prophets; desecrating cemeteries; and in Palmyra, even beheading the 83-year-old scholar who had spent a lifetime preserving antiquities there.

We know that Daesh’s actions are animated by an extreme and intolerant ideology that castigates Yezidis as, quote, “pagans” and “devil-worshippers,” and we know that Daesh has threatened Christians by saying that it will, quote, “conquer your Rome, break your crosses, and enslave your women.”

Secretary Kerry asserted the same legal conclusion we provided to him in our letter weeks ago, in addition to what we have been saying in meetings on Capitol Hill as we advocate for resolutions acknowledging this genocide, in oral testimony at the United Nations, and in our global advocacy for years now.

One element of genocide is the intent to destroy an ethnic or religious group, in whole or in part. We know that Daesh has given some of its victims a choice between abandoning their faith or being killed, and that for many is a choice between one kind of death and another.

The fact is that Daesh kills Christians because they are Christians; Yezidis because they are Yezidis; Shia because they are Shia. This is the message it conveys to children under its control. Its entire worldview is based on eliminating those who do not subscribe to its perverse ideology. There is no question in my mind that if Daesh succeeded in establishing its so-called caliphate, it would seek to destroy what remains of ethnic and religious mosaic once thriving in the region.

While Secretary Kerry said that he is “neither judge, nor prosecutor, nor jury with respect to the allegations of genocide, crimes against humanity, and ethnic cleansing by specific persons,” he did adamantly emphasize that the international community must recognize what ISIS is doing to its victims, the perpetrators must be held accountable, and, while naming the crimes is important, “what is essential is to stop them.”

Today is a significant step towards the U.S. leading the world in stopping this historic evil being perpetrated by ISIS.  As we’ve been advocating for years, ISIS is committing genocide and other international crimes. The Obama Administration’s determination and declaration today is a significant victory.

It is the first step to legally providing Christians critical protections, and it follows on the footsteps of similar genocide designations that we successfully advocated for at the Council of Europe’s Assembly and the European Parliament.

But as Secretary Kerry concluded today, we must not only name these crimes, we must stop these crimes and we must protect the victims of these atrocities. This will require leadership from the United States at the United Nations and on the world’s stage. It will require a commitment to victory against ISIS.

While the genocide designation is an important first step, we must continue to urge the Obama Administration to comply with its moral and international responsibilities in the face of genocide.  Today’s designation affirms that the definition of “genocide” under U.S. law has been met.  Because the U.S. has ratified the Convention on the Prevention and Punishment of the Crime of Genocide, it must now seek enforcement of the Convention.

There is still work to do. Obama Administration officials have already asserted that “Kerry's finding will not obligate the United States to take additional action against ISIS militants . . . .”  The United States must lead the world in defending Christians from genocide, not merely pay lip service to their plight as they are slaughtered.

At the ACLJ, we will not stop until ISIS is defeated once and for all, ending the genocide against our brothers and sisters in Christ and other religious minorities in the Middle East.

Today is a big victory, but our work must continue.  Until Christians are truly protected, until ISIS is defeated, we will continue aggressively advocating across the globe for each and every life facing the threat of genocide.