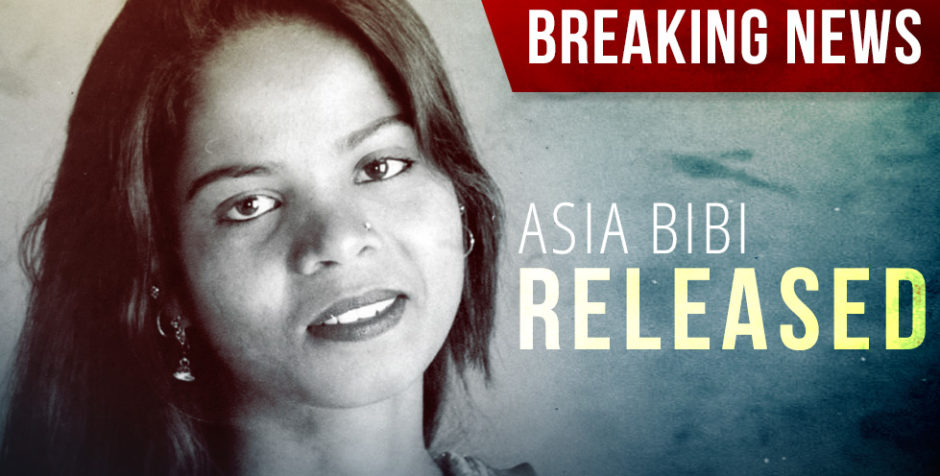 The Supreme Court of Pakistan has overturned Asia Bibi’s conviction and death sentence for blasphemy. After a nine-year-long battle, Asia Bibi, a Christian mother, is free to go.

Our team, who was present in the courtroom, has confirmed that Chief Justice Mian Saqib Nisar read the verdict, stating that the judgment of the High Court is reversed and Asia Bibi should be set free if she is not wanted in any other case.

Asia Bibi was arrested in 2009 and convicted in 2010 under section 295-C of Pakistan’s penal code that punishes blasphemy against the Prophet Muhammad with the death penalty. She was sentenced to execution by hanging. Asia had been accused of speaking disparagingly about the Prophet, but her real crime was that she offered water to Muslim co-workers who believed Asia had made the water ceremonially unclean by drinking from the same cup. They asked her to convert to Islam, which Asia refused to do. Five days after this argument between the women, a Muslim cleric lodged a complaint against Asia after a mob of Muslims beat her and forced her to confess.

For more than four years, the ACLJ has relentlessly fought for Asia Bibi’s freedom, engaging in a multi-pronged legal advocacy campaign across the globe. We’ve worked through our office on the ground in Pakistan. We’ve presented Asia Bibi’s plight to the U.N. to urge intervention. We’ve sent legal letters directly to Pakistan, demanding her immediate release. We are thankful to the more than 800,000 people around the world who have signed our petition for her freedom. Today, Asia Bibi is now a free woman.

However, the danger for this Christian mother of five is not over. Islamabad, the seat of the highest court in Pakistan, was on high security alert today. Rangers were deployed around the court and other parts of the capital. And there are reports of mobs in the streets burning tires over the court’s decision to release her.

While this is a day of victory and celebration for Asia Bibi, her family, and all those who have relentlessly prayed for her, Asia and Christians in Pakistan need continued prayers. Today’s verdict will not make many in Pakistan happy. The death threats that have been issued against Asia and the justices should be taken seriously.

We urge the government of Pakistan to provide necessary security to Asia and give her a safe passage to a place of peace and security. And we ask each and every one of you to please pray for Asia Bibi’s safety as you rejoice at her release.