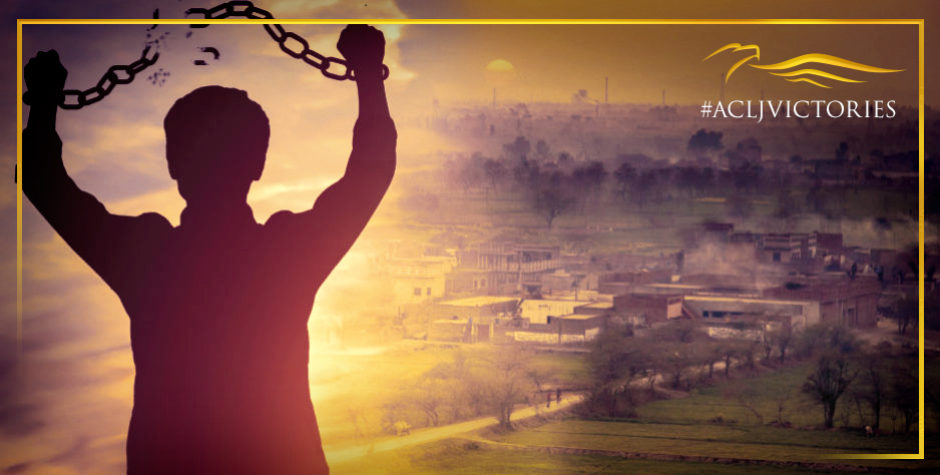 A Christian family – including young children – was forced to perform backbreaking labor in Pakistan against their will with no hope of relief, until the ACLJ stepped in to free them.

Through our international affiliate, the European Centre for Law and Justice (ECLJ), we obtained the freedom of Christian man Babar Masih, his wife, and their four children who were forced to perform farm labor for a Muslim man for two years.

In 2017, Muhammad Asif loaned Babar Masih approximately 230,000 Pakistani rupees (about $1,463 USD). Masih agreed to plough twenty-five acres of land and oversee some farm animals for Asif in exchange for 7,000 rupees (about $44) per month and a daily liter of milk.

Asif made Masih’s wife, Zubaida, and their daughter perform household duties such as sweeping and laundry for 1,200 rupees (about $8) a month. Masih’s other children, ages eight, ten, and twelve were forced to care for the animals.

After one year, Masih told Asif that $8 was not enough for his family’s labor. Asif claimed it was enough because of the loan he gave Masih. When the Masihs attempted to quit, Asif refused because the initial loan was not paid off, despite underpaying the Masih family.

Asif forced the Masihs to work another year and stopped paying them altogether, claiming their salary was being applied against their debt. Zubaida then escaped, and managed to contact our office in Pakistan.

Our attorneys filed a habeas corpus petition in the Lahore High Court. When a court appointed official arrived at the farm to collect the family for the court, their quarters were locked from the outside. When the police broke the lock, they found Masih and his daughter chained to the bed.

The following day the court official presented his report, listing the appalling conditions in which the Christian family was being kept. Asif’s counsel tried to convince the judge that the Masihs had not been detained against their will or forced to work, and that it had actually been their last day of work. The judge responded: “Then you should not have a problem if they are released.”

Despite Asif’s claims that the Masihs still owed him money, the judge said the court official’s report is clear, and stated, “I am going to set them free.”

Masih and his family are extremely grateful for the swift relief our office was able to provide.

We will continue to defend religious freedom for believers around the globe, especially in Pakistan. Children should never be put in chains or forced into unpaid labor.

To help the ACLJ continue to have the resources we need to make victories for Christian families like this possible please consider making a Tax-Deductible donation to the ACLJ through our year-end Matching Challenge. Your gift will be DOUBLED dollar-for-dollar through the end of the year.