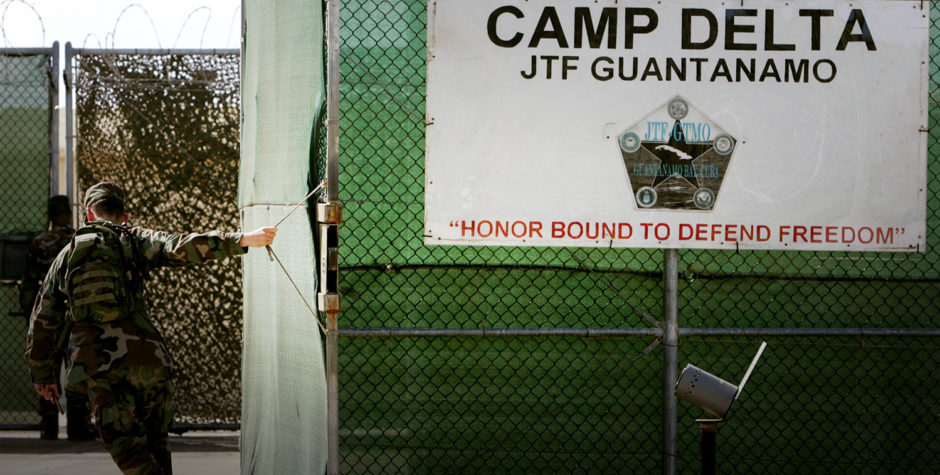 Last Week President Trump signed an Executive Order indicating his intention of keeping the prison at Guantanamo Bay, Cuba (GITMO) open. The move reverses an Obama-era Executive Order to close the military prison — a goal that the former President was unable to achieve before leaving office in 2017. Forty-one inmates – enemy combatants in the war on terror – still remain at the facility.

This is a major victory that the ACLJ has been aggressively engaged in for years: in the courts, in Congress, and in the public. GITMO is a crucial tool in the fight against terror.

How to handle individuals captured fighting for the Islamic State in Iraq and Syria (ISIS) has been a legal and national security question for both the Trump and Obama administrations. Al-Qaeda also continues to operate in multiple countries. One of the chief concerns is that, if detainees are released, they will return to the battlefield and pose a threat to coalition forces and the security interests of the United States.  Many of those released during the Obama Administration have indeed returned to the fight.

President Trump’s new Executive Order also calls on Secretary of Defense James Mattis to give the White House recommendations within 90 days as to how the U.S. should handle individuals captured fighting “in connection with an armed conflict, including policies governing transfer of individuals to U.S. Naval Station Guantánamo Bay.”  No new detainees were transferred to GITMO under President Obama; his Administration instead focused on trying accused terrorists in federal court, as well as airstrikes and drone attacks to kill terrorists wherever they were found.  However, killing the terrorists stymies the ability to interrogate them and to gain critical information about their operations, including any planned terrorist attacks on the homeland. Two-hundred and one terrorist detainees were released during the eight years Obama was President, twenty-three of them released between Election Day in 2016 and the inauguration of President Trump.

In fact, on the eve of President Obama leaving office, we uncovered through our Freedom of Information Act (FOIA) lawsuit that one of the key individuals tasked with shutting down GITMO was put in place as a “favor” to Clinton Foundation donors.

Just hours ago (at the 11th hour on the night before the next President is inaugurated) the State Department turned over the documents. These documents show that Brock Johnson was the “favor”.  Just over two weeks after the initial email from a senior Clinton Foundation official was sent to then-Secretary of State Clinton’s top aids – Huma Abedin and Cheryl Mills – Brock Johnson began a job – classified as “critical sensitive” at the State Department.

Who is Brock Johnson: reportedly a former Obama Campaign operative, who while he was Special Assistant to the Special Envoy for Guantanamo Closure “helped shepherd deals with less conventional allies such as Palau.” Brock Johnson later tipped off Cheryl Mills about a “Significant FOIA” request in 2012 that requested information about “the number of email accounts of, or associated with, Secretary Hillary Rodham Clinton, and the extent to which those email accounts are identifiable as those of or associated with Secretary Clinton.” The Inspector General found that the State Department then falsely stated that there were “no records responsive to your request,” when in fact numerous officials knew about Secretary Clinton’s private email address. To be clear, Johnson tipped off Cheryl Mills about the FOIA request that would have first publicly uncovered Secretary Clinton’s email scandal; instead the State Department covered it up for months longer. And Johnson obtained his job as a “favor” to the Clinton Foundation.

Thankfully, Johnson is no longer employed at the State Department, and now his work is being reversed. GITMO’s closure always represented a failed false narrative.

"We must be clear," Trump said during his State of the Union address before Congress last Tuesday night. "Terrorists are not merely criminals. They are unlawful enemy combatants. And when captured overseas, they should be treated like the terrorists they are."

At the ACLJ we have been at the forefront of advocating for policies to ensure our national security, defeat terrorists, and expose those who would put our nation at risk. Many of you have been a part of keeping GITMO open.  Over 112,000 ACLJ supporters signed our petition to keep the prison open.

Your voice matters. America is still at war.  It is foolish to release captured enemy combatants to other nations, as done by the Obama Administration, nations who do not have America’s best interests in mind.  Nor is it prudent to handle terrorists as mere criminals to be processed through our criminal justice system.  They are what the name implies, “unlawful enemy combatants” in a war they declared, a war for the very life and soul of the civilized world.

We applaud the action of President Trump.  The facility at Guantanamo Bay is a critical part of keeping America safe.  Taking enemy terrorists off the battlefield, and gleaning information from those whose chief aim is to kill innocents and destroy our way of life, is vital to the conduct of this war.  The detention facility in Cuba must not only be kept open, it should be utilized as we continue to capture those who are the enemies of freedom, justice and peace.