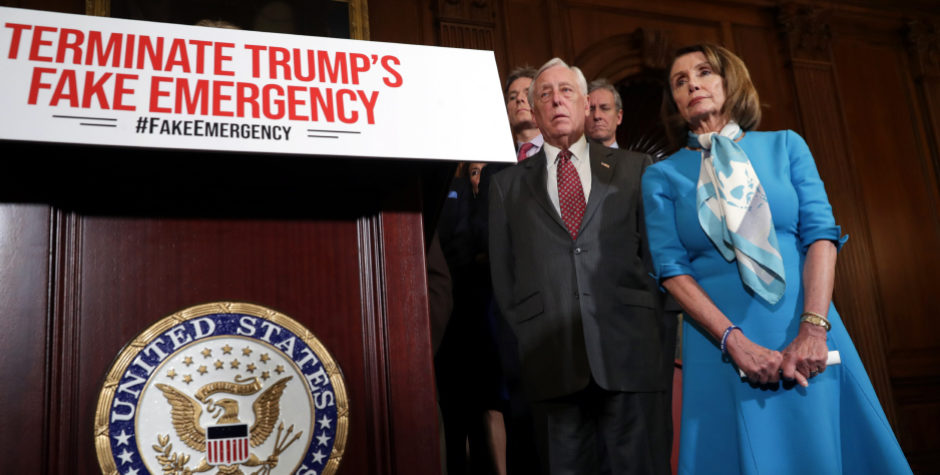 Speaker Pelosi’s obstinancy and obstruction on the issue of border security has created a crisis at the border – one the Trump Administration has been seeking to resolve.

Not only have Speaker Pelosi and her caucus in Congress refused to do their duty to the American people by addressing this crisis, Pelosi has led an effort to block President Trump from addressing it as well.

Thankfully, thus far, she has failed . . . miserably. Now she’s doubling down on that failure by taking her lawsuit against President Trump’s border security efforts up on appeal.

As we previously explained:

The ACLJ participated in this case, by filing an amicus brief in support of the Trump Administration and its efforts to put an end to the humanitarian and security crisis at our southern border and protect Americans.

In this case, the U.S. House of Representatives, led by Speaker Pelosi, had sought a preliminary injunction to stop the Trump Administration from utilizing and transferring funds to secure the border via an appropriations statute, 10 U.S.C. § 284(b)(7), a transfer provision, § 8005 of the 2019 DOD Appropriations Act, and also separate funds pursuant to 10 U.S.C. § 2808, a statute identified by the President in his National Emergencies Act declaration.

We raised several arguments in our brief. Among them, we asserted that the Speaker Pelosi-led U.S. House of Representatives lacked standing – the legal right to sue – to challenge the Trump Administration’s usage of congressionally enacted funding statutes.

We also argued that it was improper for the U.S. House – because it does not like the President’s policy – to demand that a court intervene to change the rules in a political dispute between two branches of government. In other words, Congress passed the laws and appropriated the funds. The President is using those funds according to the constraints imposed by Congress. Because of constitutional separation of powers principles, a court should not take sides in a case like this.

The Court agreed, finding that the dispute is political and not appropriate for court intervention. Therefore, the Court did not reach the merits – because the U.S. House’s lack of standing meant that the preliminary injunction it requested was doomed from the outset.

Speaker Pelosi’s U.S. House did not even have the right to be heard in court in the first place. As the Court put it, “[t]he Court declines to take sides in this fight between the House and the President.” . . .

If Speaker Pelosi decides to appeal the Court’s ruling to the U.S. Court of Appeals for the District of Columbia Circuit, the ACLJ will file in that Court as well.

Speaker Pelosi did appeal, and so we have just now filed a critical amicus brief in the Court of Appeals for the D.C. Circuit. In our brief, we cut through the core of Speaker Pelosi’s attempts to undermine the Constitution:

The bottom line is Appellant lacks standing. And, beyond that, Congress did appropriate the funds being utilized by the Appellees to secure portions of the Southern Border and authorized the transfer of additional funds for that purpose. 10 U.S.C. § 284(b)(7); FY 2019 DOD Appropriations Act, § 8005. Appellees are utilizing and transferring appropriated funds for the right purposes and within the constraints imposed by Congress. Court intervention – especially in the form of preliminary injunctive relief – attempting to give some unhappy members of one chamber of Congress and certain of their constituents the result that the actual representative body of Congress is politically unwilling or unable to achieve within the constitutional structure would violate separation of powers principles and improperly invade the provinces of the political branches.

In addition to the Speaker Pelosi-led lawsuit in the D.C. Circuit, several leftist groups and Left-run states filed lawsuits in the 9th Circuit. Thankfully, the Supreme Court has issued emergency stays in each of those cases, allowing President Trump’s efforts to secure the border and address the humanitarian crisis this fiasco has caused to move forward.

As we previously explained about these cases and our legal action:

The President is doing his best to address [the growing crisis at the border]. But the Speaker Nancy Pelosi-led U.S. House of Representatives, the leftist governments of certain states, and leftist organizations are doing everything they can to stop him from securing our southern border. Multiple lawsuits and appeals are underway.

In this case, an environmental group and border activists represented by the American Civil Liberties Union (ACLU) had persuaded the lower court to freeze the Trump Administration’s usage of funds to construct roads, fences, and lighting in two key sectors of the border – the El Paso and Yuma Sectors – before a full merits hearing could even occur. . . .

We had filed an amicus curiae brief in California v. Trump, 19-cv-872 (N.D. Cal.), a different, but related, case in the same U.S. District Court whose ruling the Trump Administration has just appealed in Sierra Club. In California v. Trump, the leftist governments of 20 states sued to stop the Administration’s efforts to protect the border. The Ninth Circuit allowed that group of 20 states to file a brief in the appeal we just filed in. . . .

We had filed a legal brief in . . . U.S. House of Representatives v. Mnuchin, 19-cv-969 (D.D.C.) [as well], calling attention to the U.S. House’s lack of standing (or ability to sue). The U.S. District Court for D.C. agreed and rejected the U.S. House’s motion outright. The U.S. House has now appealed, and we are working on our brief at this very moment.

The Supreme Court stays and the district court’s positive ruling in D.C. have allowed President Trump to not only sign the contracts but also start construction.

As a result, the crisis is lessening. But this is why we’re taking action, to ensure that these border security efforts are allowed to be put fully in place. We cannot allow Speaker Pelosi and the Left to undermine our national security. We will continue fighting to ensure that our border is secure. Now it’s time for Congress to actually do its job.