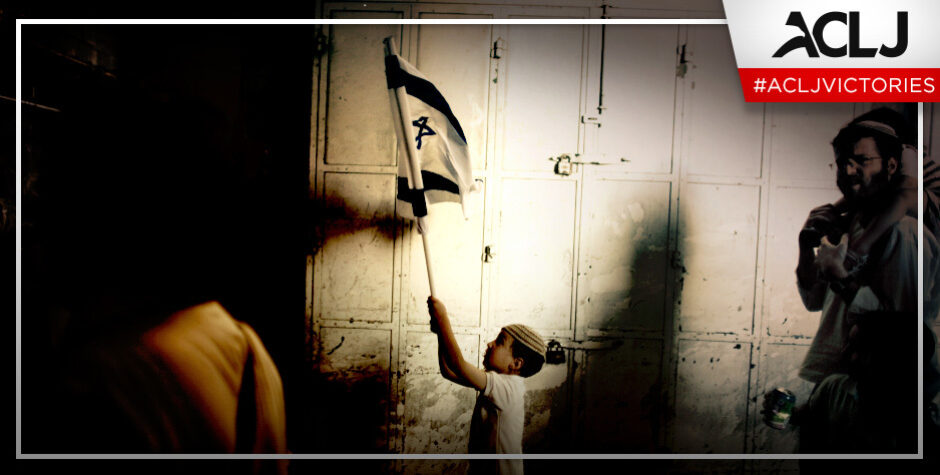 This is the latest installment of our year-end victories series looking back at some of the numerous victories by the ACLJ in 2020.

This year the ACLJ helped score a key victory in the 9th Circuit Court of Appeals in defense of the interests our ally Israel against harmful antisemitic discrimination and economic terrorism.

When a lawyer sued the state of Arizona over what he erroneously called suppression of free speech due to his support for anti-Israel organizations and activities such as those by the Boycott, Divestment, and Sanction (BDS) movement, we took action, filing a critical amicus brief in the case.

The goal of BDS is clear: the elimination of the State of Israel.

An Arizona-based attorney, Mikkel Jordahl – who was actively involved in organizations that share an anti-Israel bias – contracted with the state of Arizona for 12 years, providing legal advice and training to jail inmates.

Jordahl was aware of the state’s policy to not enter into business relations with companies that participate in activity that directly undermines the State’s own commercial policies and interests, such as BDS boycotts.

When Jordahl’s contract came up for renewal, he certified that his business was not acting in compliance with or adherence to calls for boycotts against Israel.

However, Jordahl stated that he, in his personal capacity, would not necessarily refrain from such anti-Israel boycotts. The county accepted his certification even with his caveat. However, he later voluntarily walked away from the agreement and, along with the ACLU, filed a frivolous free speech lawsuit.

As our amicus brief stated, Jordahl chose not to renew his contract, citing his objection to the statute. But then filed his lawsuit, erroneously claiming that the statute simultaneously chills and compels private speech in violation of the First Amendment.

We argued the Arizona statute in no way “chilled” the right to free speech, nor does it compel private speech or prohibit any private individual, acting in a personal capacity, from boycotting the State of Israel. Mr. Jordahl chose to walk away from the contract.

The 9th Circuit agreed with our arguments, ruling to “vacate the preliminary injunction and remand the case to the district court with instructions to dismiss the claims for declaratory and injunctive relief.”

Sadly, dangerous antisemitism is on the rise. Anti-Israel rhetoric like that spread by the BDS movement easily can and has led to appalling violence right here in America.

To help the ACLJ continue to have the resources we need to fight antisemitism and defend the interests of our ally Israel, please consider making a Tax-Deductible donation to the ACLJ through our year-end Matching Challenge. Your gift will be DOUBLED dollar-for-dollar through the end of the year.