2018 Victories: A Promise is Fulfilled as the U.S. Embassy Opens in Jerusalem, Recognizing It as the Eternal Capital of Israel | American Center for Law and Justice
Search  |  Logout  |  Login  |  Register 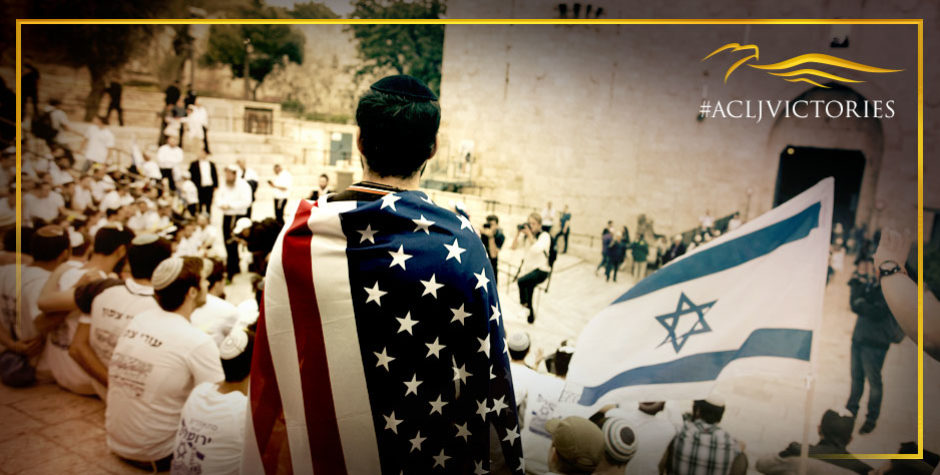 2018 Victories: A Promise is Fulfilled as the U.S. Embassy Opens in Jerusalem, Recognizing It as the Eternal Capital of Israel

This year saw the completion of something ACLJ Chief Counsel Jay Sekulow has been fighting for, alongside our ACLJ members, literally for decades.

May 14, 2018 marked the fulfillment of a decades-old promise to open our embassy in its rightful place, Jerusalem.

22 years ago the Jerusalem Embassy Act was passed, recognizing Jerusalem as the capital of the State of Israel, and ordering the relocation of the U.S. embassy from Tel Aviv to Jerusalem.

The law specifically stated that “the United States Embassy in Israel should be established in Jerusalem no later than May 31, 1999.” Sadly it took almost 19 years to the day for it to come to fruition.

No administration since – Republican and Democrat alike – followed through, instead invoking waivers, or citing multiple explanations and excuses.

Until last year when President Trump officially acknowledged Jerusalem as Israel’s capital – a very significant action in and of itself – and declaring the U.S. Embassy would reopen in Jerusalem on May 14, 2018, coinciding with the 70th anniversary of Israel’s independence.

Jay Sekulow was on the ground in Jerusalem for the monumental occasion when the doors officially opened to the new U.S. Embassy.

It was cause for great celebration for both America and Israel, and the Israeli people lined the streets with the flags of both our great nations.

But the fight for our ally Israel is not over. We’re mobilizing our ACLJ office in Jerusalem as we continue to defend Israel’s interests across the globe.

A storm is gathering against our ally, as Hamas and Hezbollah threaten war and launch rockets and incendiary devices at Israel. Iran has openly tested ballistic missiles emblazoned with the threat “Israel must be destroyed.”

And within the anti-Semitic U.N., a $65 million dollar slush fund feeds the Palestinian Authority’s lawfare campaign against Israel.

We will defend our great ally Israel, as is our sacred duty.

Moving our embassy to Jerusalem, publicly recognizing it as the eternal capital of the State of Israel, only strengthens our relationship with our strongest ally in the Middle East.

To help the ACLJ continue to have the resources we need to make these victories possible and continue defending Israel’s interests please consider making a Tax-Deductible donation to the ACLJ through our year-end Matching Challenge. Your gift will be DOUBLED dollar-for-dollar through the end of the year.