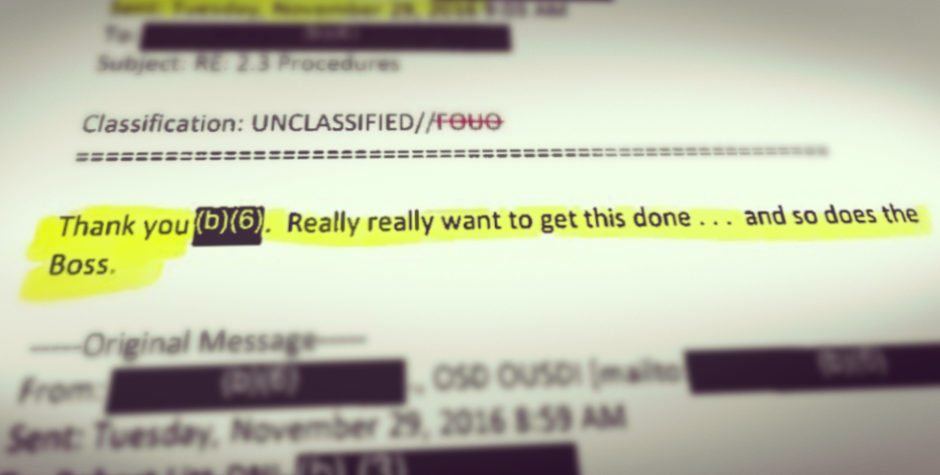 The American Center for Law and Justice (ACLJ) obtained records that show that the Office of the Director of National Intelligence (ODNI), under Director James Clapper, was eager and actively pushing to get its new procedures in place increasing access to raw signal intelligence before the conclusion of the Obama Administration and before President Trump took office.

The documents the ACLJ obtained in one of our Freedom of Information Act (FOIA) lawsuits – this one against the ODNI and the National Security Agency (NSA) – confirmed what we suspected:  the ODNI rushed to get the new “procedures signed by the Attorney General before the conclusion of this administration.”

The documents also reveal that ODNI’s Robert Litt told Office of the Undersecretary of Defense’s Director of Intelligence Strategy, Policy, & Integration (and also USDI’s Liaison to ODNI):  “Really want to get this done . . . and so does the Boss.”

And, documents produced to the ACLJ by the NSA in this lawsuit show that NSA officials discussing that they “could have a signature from the AG as early as this week, certainly prior to the 20th Jan.” In other words, certainly before President Trump’s Inauguration.

It was not immediately clear just how significant these revelations were. Now we know and these records must be publicized.

Consider what we now know about the nature and degree of Deep State opposition to President Trump. With the public revelations about the infamous disgrace known as the Steele dossier, FISA abuse and the underpinnings of Crossfire Hurricane, as well as former-DNI James Clapper’s open hostility to President Trump and intentional leaking by senior law enforcement and intelligence actors – all of which appears to show a coordinated effort across agencies to oppose the Trump Administration – the picture is coming in to focus.

As part of the ACLJ’s government accountability project and FOIA practice, we went to work to uncover everything we could about the embedded “resistance” operating within our government. In this particular instance, it concerned us when we heard that, according to the New York Times, “[i]n its final days, the Obama administration has expanded the power of the National Security Agency to share globally intercepted personal communications with the government’s 16 other intelligence agencies before applying privacy protections.”

On December 15, 2016, after President Trump’s election, DNI James Clapper executed a document entitled “Procedures for the Availability or Dissemination of Raw Signals Intelligence Information by the National Security Agency Under Section 2.3 of Executive Order 12333.” On January 3, 2017, then-Attorney General Loretta Lynch executed the document, indicating her approval.

According to the New York Times, “[t]he new rules significantly relax longstanding limits on what the N.S.A. may do with the information gathered by its most powerful surveillance operations.” Authority for these new procedures derives from Executive Order 12333, last amended by President Bush in 2008, which provided:

Elements of the Intelligence Community are authorized to collect, retain, or disseminate information concerning United States persons only in accordance with procedures established by the head of the Intelligence Community element concerned or by the head of a department containing such element and approved by the Attorney General, consistent with the authorities provided by Part 1 of this Order, after consultation with the Director.

The New York Times had first reported in 2014 that deliberations by Obama Administration officials on developing these procedures were occurring. But, apparently, the new procedures were not completed by the Director of National Intelligence and approved by the Attorney General until just weeks before the end of President Obama’s tenure.

As we cautioned at the time, this significant policy change appears to have a direct correlation to the exponentially increased number of intel leaks the Trump Administration has been dealing with. The ACLJ was concerned with what appeared to be a troubling step.

By greatly expanding access to classified information by unelected, unaccountable bureaucrats, the Obama Administration paved the way for a shadow government to leak that classified information – endangering our national security and severely jeopardizing the integrity and reputation of our critical national security apparatus – in an attempt to undermine President Trump.

While sharing information among intelligence agencies is not a new concept, and this isn’t the first time an Administration has made amendments to intelligence policy, the timing was just way to suspicious.

The ACLJ’s FOIA requests to the ODNI and the NSA sought, among other things, all records:

“referencing, connected to, or regarding in any way their approval of the procedures set forth in the document entitled “Procedures for the Availability or Dissemination of Raw Signals Intelligence Information by the National Security Agency Under Section 2.3 of Executive Order 12333,” which Director of National Intelligence Clapper executed on December 15, 2016, and which then-Attorney General Lynch approved on January 3, 2017.”

We sent these FOIA requests specifically “to find out why the Obama Administration waited until mere days before a new Administration took over to implement a significant change in intelligence policy.” After the ODNI and the NSA provided us with non-compliant responses, the ACLJ took these agencies to federal court in Washington. The case is styled, ACLJ v. U.S. National Security Agency, U.S. Office of the Director of National Intelligence, 16-cv-645-RC (D.D.C.).

Our team is continuing to review these documents in light of the revelations coming to light.