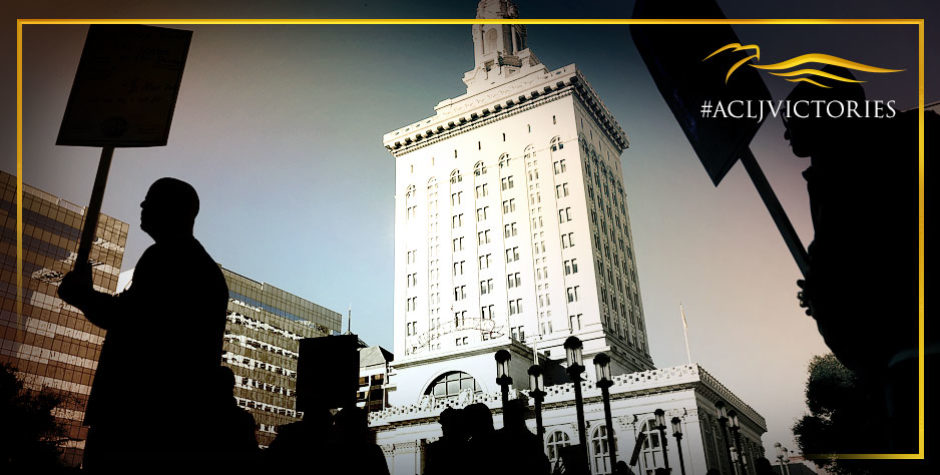 2018 Victories: The ACLJ Helps Score a Victory for American Workers While Dealing a Blow to Big Labor

Victory for American Workers and a Blow to Big Labor

The ACLJ filed an important amicus brief in a key Supreme Court case that helped secure a big win for the free speech and pocketbooks of American workers.

In a major victory, the Supreme Court struck down requirements that force public sector employees to pay fees to a public-sector labor union, even if they refuse to join.

The fee – over 70% of the usual unions dues anyway – was automatically deducted from their pay checks.

They had no choice. If they wanted to work, they had to pay this fee.

Worse still, while the union said these fees would pay for the benefits the union provided them, they also subsidized the union’s political and ideological campaigns – often far Left political causes.

The ACLJ has long defended political free speech rights. ACLJ Chief Counsel Jay Sekulow argued and won a landmark Supreme Court case paving the way for minors to express their free speech rights in the form of political contributions. In this case, we filed an amicus brief at the Supreme Court arguing that these state workers should have a say over whether they wanted to pay fees used to support political causes they opposed.

Our brief argued, “Government coercion of agency fees is unconstitutional because it forces an employee to support causes which that employee does not wish to support. Such coercion violates fundamental notions of liberty under the First Amendment.”

In short, we argued that the state was using its power to force workers to subsidize and support the political and ideological beliefs and actions of the union, whether they agreed with them or not, if they wanted to work.

It could be fair to say the law seemed tantamount to legalized extortion. It was clearly a patent violation of workers’ First Amendment rights.

The court ultimately agreed with our arguments and overturned the provision, stating “the First Amendment does not permit the government to compel a person to pay for another party’s speech just because the government thinks that the speech furthers the interests of the person who does not want to pay.”

Score one for the American worker.