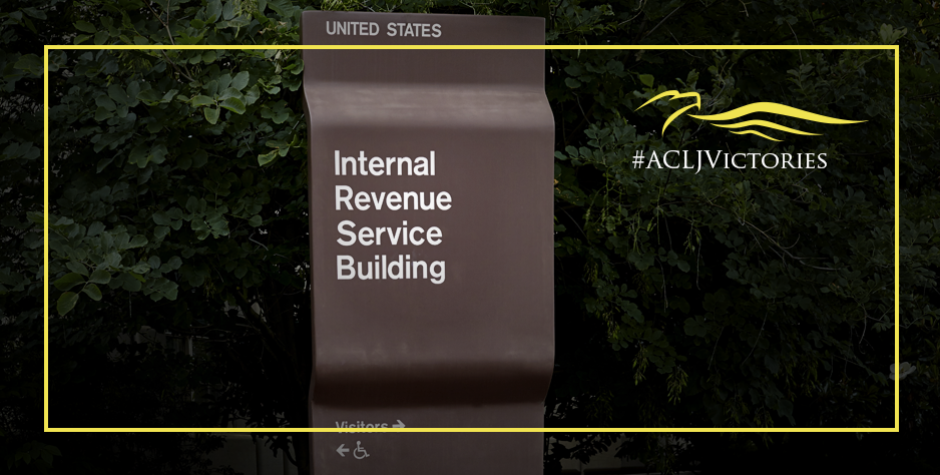 This is the latest installment in a year-end series looking back at a few of the numerous victories by the ACLJ in 2017.

Five years ago, no one would have believed this victory was possible. We were taking on the Obama Administration’s Internal Revenue Service (IRS) – the most feared bureaucratic agency – in federal court over the politically motivated targeting of conservative and Tea Party groups.

Starting in early 2012, the ACLJ was contacted by dozens of Tea Party and conservative groups who were being harassed by the Obama IRS after submitting applications for tax-exempt status. Their tax-exempt applications were held up for years and they began receiving unconstitutional requests for donor and member information. Shortly thereafter, the IRS was implicated in one of the worst political targeting scandals of the century.

In response, the ACLJ filed a massive lawsuit against the IRS for implementation of an unlawful targeting scheme. Documents released earlier this year in our lawsuit revealed that the IRS, under the Obama Administration, constructed a special group to review “all applications associated with the Tea Party.” This group was designed to ensnare targeted organizations’ tax exemption applications in order to limit their impact during the 2012 elections. The lawsuit also found that the IRS colluded with Obama’s FBI and DOJ in an attempt to “piece together” false criminal charges against the Tea Party groups it wrongfully targeted.

Our lawsuit not only prompted the IRS to admit in federal court that it wrongfully targeted these groups during the Obama Administration, but also issued an apology to our clients for doing so. In addition, the IRS consented to a court order prohibiting it from ever engaging in this form of unconstitutional discrimination in the future. Through this Consent Order, the IRS admits that it targeted conservative and Tea Party groups based on their viewpoints, and that such viewpoint discrimination violates fundamental First Amendment rights. This is the first time the IRS has admitted that its targeting scheme was blatantly unconstitutional.

With your support, massive victories like this one will continue to send powerful warnings to the deep state bureaucracy that it will not be allowed to violate the Constitution in order to silence and shut down the conservative agenda.

You can read more in the ACLJ’s 2017 Victories series here.