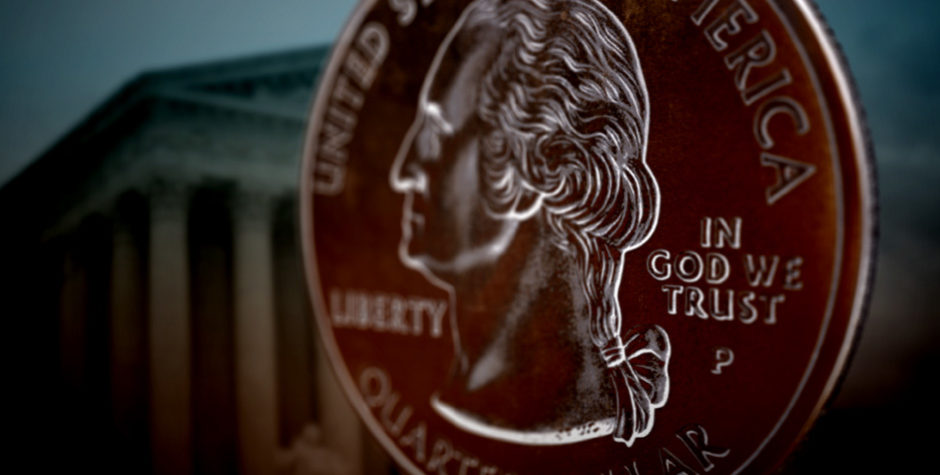 Supreme Court Rejects Atheists Challenge to “In God We Trust”

Supreme Court Rejects Challenge to “In God We Trust”

In a big win for our American heritage, the Supreme Court just rejected a federal lawsuit to have “In God We Trust” removed from our national currency.

Whatever your beliefs, faith has been a cornerstone of this nation since the Pilgrims risked their dangerous journey across the sea to flee religious persecution some 400 years ago. And for decades our country has celebrated that courageous spirit through our Motto, “In God We Trust.”

An atheist activist filed suit to have the phrase removed from our money, claiming it was a government endorsement of religion and violated the constitutional rights of atheists. Thankfully, the Court refused to take the case, allowing a federal appeals court decision that we filed in to stand.

The Supreme Court rejected an atheist case Monday to remove "In God We Trust," the national motto, from all coins and currency from the Department of Treasury . . . the same activist attorney who tried to remove "under God" from the Pledge of Allegiance, lost his case, arguing Congress' mandate to inscribe "In God We Trust" on currency was a government endorsement of religion and a violation of the First Amendment.

In his petition, Michael Newdow argued that because his clients are all atheist individuals or atheist groups, the government violated their constitutional rights. And the National Motto "In God We Trust” reduced his atheist clients to “political outsiders.”

Petitioners are Atheists. As such, they fervidly disagree with the religious idea that people should trust in God. On the contrary, their sincere religious belief is that trusting in any God is misguided. Thus, by mandating the inscription of facially religious text (i.e., “In God We Trust”) on every coin and currency bill, Defendants have turned Petitioners – among whom are nine children – into “political outsiders” on the basis of their most fundamental religious tenet . . . . Maintaining that these circumstances violate their constitutional rights under the Establishment Clause and the equal protection component of the Due Process Clause.

The ACLJ filed a critical amicus brief on behalf of 50 Members of Congress when the suit was first filed, urging the court to dismiss the ludicrous lawsuit, arguing that “while the First Amendment affords atheists complete freedom to disbelieve, it does not compel the federal judiciary to redact the national motto from the Nation’s currency.”

The court agreed, dismissing the suit, but the plaintiffs almost immediately appealed the decision to the Court of Appeals for the Sixth Circuit. We filed another amicus brief at the Court of Appeals, also urging the ruling be upheld since the Plaintiff had proven “no direct government interference with their religious beliefs, they can show nothing more than offense, which is not a legally cognizable injury under the Free Exercise Clause and RFRA.”

The court dismissed the atheists’ suit as well, yet again agreeing with our arguments that “In God We Trust” on our currency “burdened neither the atheists’ free exercise nor free speech clause rights because Plaintiffs were not compelled to do anything.” In other words it doesn’t force anyone to do or believe anything, and it in no way violates the Constitution.

Undeterred, despite loss after loss, the same plaintiffs filed a petition at the U.S. Supreme Court, and we would have been prepared to act again, but it would quickly prove unnecessary. Continuing the atheists' streak of defeats in federal court challenges to the National Motto, the Supreme Court of the United States has rightly rejected the Plaintiffs’ petition without comment, allowing the lower court rulings to stand.

This is a victory for the values of most Americans and our religious history as a nation.

“In God We Trust” first appeared on an American coin in 1864, and has been on all paper bills and coins since the ‘50s. It does not require the user to prescribe to any religious belief whatsoever. It simply acknowledges a monumental part of our country’s history that we dare not ever forget, or stop fighting to protect.

As these challenges to our National Motto and religious heritage as a nation spring up, we’ll be ready to defend them again. And win.