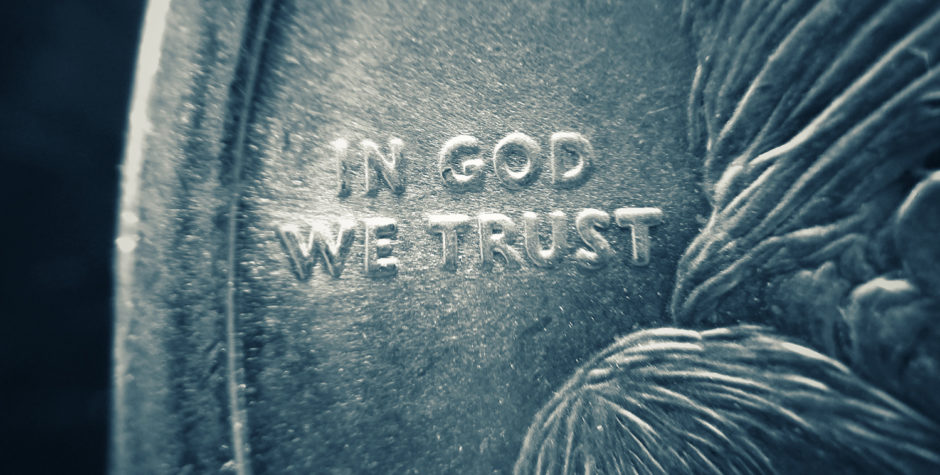 VICTORY: Federal Appeals Court Upholds Our National Motto, Dismissing Atheist Challenge to "In God We Trust" on Our Currency

A federal appellate court has just dismissed an atheist lawsuit, agreeing once again with our arguments that the National Motto – In God We Trust – does not violate the Constitution.

Earlier this week, the Court of Appeals for the Sixth Circuit affirmed the lower court’s decision dismissing Michael Newdow’s lawsuit challenging the constitutionality of the National Motto.  As we previously noted, atheists, represented by Michael Newdow argued that the mere presence of the National Motto on currency violates their Free Speech and Free Exercise Clause rights.  The atheists asserted that carrying currency equated to governmental compulsion to speak in support of the National Motto and to bear a “religiously offensive” message, in violation of the Free Exercise Clause and the Religious Freedom Restoration Act (RFRA).

With your support, we filed a critical amicus brief on behalf of a bipartisan group of 38 Members of Congress, and the Committee to Protect the National Motto, which consisted of over 120,000 ACLJ members, urging the court to affirm the district court’s decision to throw out Plaintiffs’ lawsuit. We argued that “while the First Amendment affords atheists complete freedom to disbelieve, it does not compel the federal judiciary to redact the national motto from the Nation’s currency.” We also explained to the court that “Plaintiffs’ quarrel is essentially with a foundational principle of America,” and “the national motto simply echoes the principle found in the Declaration of Independence that our freedoms come from God and not the state.” Our brief argues further that neither the free speech rights nor the free exercise rights of Plaintiffs are impaired by seeing the National Motto on the currency. Placing the National Motto on currency does not force them to do anything. The National Motto is the government’s message and no one would attribute that message to atheists or to any other person who happens to carry money.

The appellate court agreed, holding that the National Motto burdened neither the atheists’ free exercise nor free speech clause rights because Plaintiffs were not compelled to do anything.  Citing one of its previous decisions, the court ruled that the national motto is a symbol of common national identity and did not discriminate against or suppress Plaintiffs’ beliefs.  With respect to Plaintiffs’ free speech claim, the court stated: “Because Plaintiffs do not allege that the Motto is attributed to them and because the Supreme Court has reasoned that currency is not ‘readily associated with’ its temporary carrier, the district court properly dismissed Plaintiffs’ Free Speech claim.”

We have also filed an amicus brief in a similar case pending before the Seventh Circuit Court of Appeals. That case was brought against the National Motto by a self-described “Satanist”. As we previously explained:

The brief we filed urges the Court of Appeals for the Seventh Circuit to affirm the lower court’s decision dismissing the lawsuit. In a short five-page opinion, the district court had rejected all of Mayle’s claims. . . .

As we discussed earlier, every court that has considered any challenge to the National Motto has rejected it. When we filed our amicus brief, we let the court know we were representing over 315,000 supporters who signed on to our Committee to Defend “In God We Trust” – Our National Motto – on Our Currency. It’s with your invaluable support that we at the ACLJ are doing all that we can to ensure that meritless lawsuits such as this one challenging the National Motto continue to meet with failure.

The Sixth Circuit’s decision this week is the latest loss in an uninterrupted string of defeats for those who seek to strip “In God We Trust” from our currency.  Thank you for your invaluable support in ensuring that they continue their perfect losing streak in federal court challenges to the National Motto.