2019 Victories: The Supreme Court Sides with ACLJ in a Victory for the World War I Cross Memorial | American Center for Law and Justice
Search  |  Logout  |  Login  |  Register 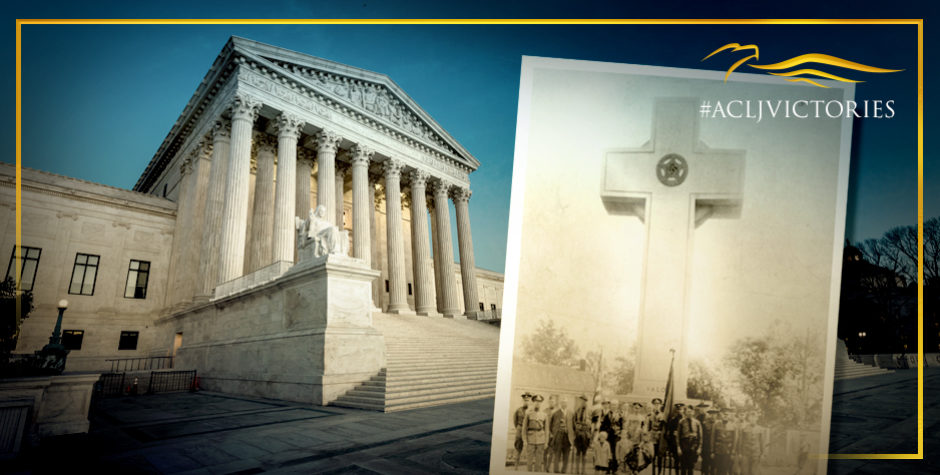 2019 Victories: The Supreme Court Sides with ACLJ in a Victory for the World War I Cross Memorial

2019 Victories: Victory for the World War I Cross Memorial

This year, when atheists tried to tear down a memorial to fallen World War I veterans because it was shaped like a cross, the ACLJ sprang into action to ensure this tribute to our nation’s heroes would continue to stand.

Maryland’s Bladensburg Peace Cross has stood for nearly a century in remembrance of 49 local servicemen who perished in World War I. Their names are listed at the base of the Cross, along with the words: “the heroes of Prince George’s County Maryland who lost their lives in the Great War for the liberty of the world.”

The American Humanist Association filed a lawsuit, claiming the Cross offended and upset them. They argued that having the Peace Cross on government land violated the First Amendment’s Establishment Clause and demanded it be torn down.

The Fourth Circuit Court of Appeals ruled in favor of the “humanists,” calling the cross an “impermissible endorsement of Christianity.” That prompted the American Legion to ask the Supreme Court to intervene.

We filed an amicus brief at the Supreme Court arguing that this WWI memorial Cross did not violate the First Amendment’s prohibition against governmental establishment of religion.

In a 7-2 victory for the memorial, the Supreme Court agreed.

As Justice Samuel Alito wrote on behalf of the majority of the Court:

The cross is undoubtedly a Christian symbol, but that fact should not blind us to everything else that the Bladensburg Cross has come to represent. For some, that monument is a symbolic resting place for ancestors who never returned home. For others, it is a place for the community to gather and honor all veterans and their sacrifices for our Nation. For others still, it is a historical landmark. For many of these people, destroying or defacing the Cross that has stood undisturbed for nearly a century would not be neutral and would not further the ideals of respect and tolerance embodied in the First Amendment. For all these reasons, the Cross does not offend the Constitution.

The Supreme Court’s decision stands as a victory not just for the Cross, but for our courageous veterans, our country, and the U.S. Constitution.

At the ACLJ, we will continue to battle to defend the religious heritage of our nation and the memory of our bravest heroes.

To help the ACLJ continue to have the resources we need to make these victories possible and stand up for our soldiers, please consider making a Tax-Deductible donation to the ACLJ through our year-end Matching Challenge. Your gift will be DOUBLED dollar-for-dollar through the end of the year.