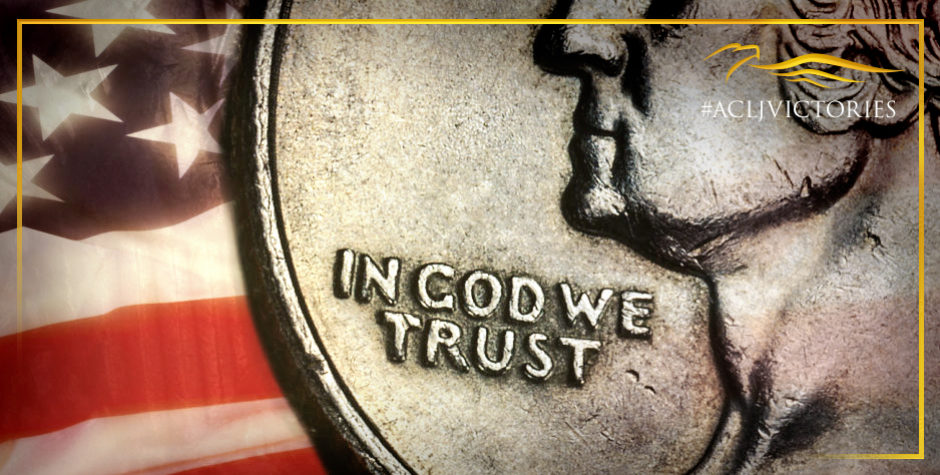 2019 Victories: Supreme Court Agrees with ACLJ in Defense of Preserving “In God We Trust”

This is the latest installment in a year-end series looking back at some of the numerous victories by the ACLJ in 2019.

In a tremendous win for our American heritage, the Supreme Court agreed with the arguments the ACLJ has been making in multiple amicus briefs at all levels of the federal judiciary for years, defending our National Motto: “In God We Trust.”

An atheist activist filed suit to have the phrase removed from our money, claiming it was a government endorsement of religion and violated the constitutional rights of atheists.

Thankfully, the Supreme Court refused to even take the case.

“In God We Trust” has appeared on all U.S. paper bills and coins since the ‘50s. It’s a tribute to the faith and courage that founded our constitutional republic.

It does not however require anyone to prescribe to any particular religious belief.

Early in this litigation, we filed a critical amicus brief on behalf of 50 Members of Congress, arguing that “while the First Amendment affords atheists complete freedom to disbelieve, it does not compel the federal judiciary to redact the national motto from the Nation’s currency.”

The district court agreed, dismissing the suit, but the plaintiffs almost immediately appealed the decision to the Court of Appeals for the Sixth Circuit, where we filed another amicus brief.

That court also dismissed the suit, agreeing that “In God We Trust” doesn’t force anyone to do or believe anything, and it in no way violates the Constitution.

Undeterred, the same plaintiffs filed a petition at the Supreme Court, which was rightly rejected without comment. The result: the National Motto stays on our currency.

This is a victory for the values of many Americans who share the faith and spirit of our forefathers.

As these challenges to our National Motto and religious heritage as a nation spring up, we’ll be ready to defeat them, and defend our heritage.

To help the ACLJ continue to have the resources we need to make these victories possible and continue defending religious liberty and our American heritage, please consider making a Tax-Deductible donation to the ACLJ through our year-end Matching Challenge. Your gift will be DOUBLED dollar-for-dollar through the end of the year.