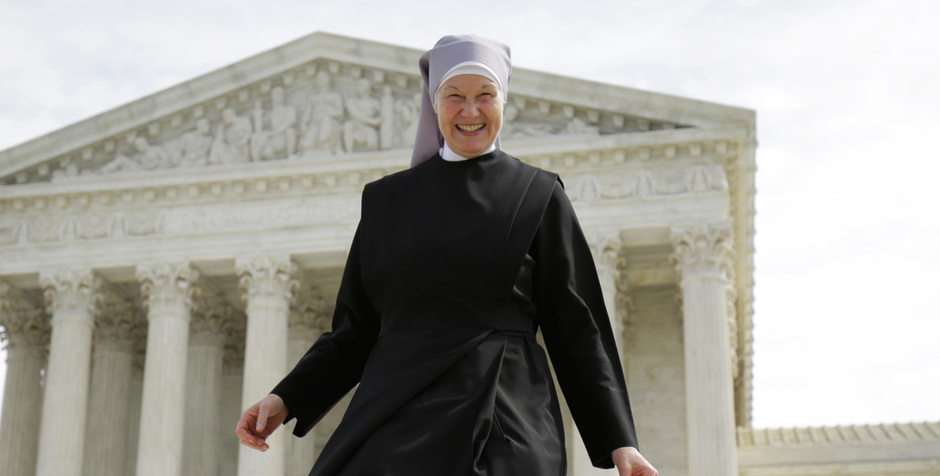 The Supreme Court announced its decision today in the HHS Mandate challenges involving, among others, the Little Sisters of the Poor.  After years of litigation in the lower courts, as well as oral arguments and multiple rounds of briefing before the Supreme Court itself, the Court unanimously announced that the numerous challenges against the HHS Mandate by religious organizations will be sent back to the lower courts in order for the parties to try to reach a compromise.  The Court wrote that the challengers and the government “should be afforded an opportunity to arrive at an approach going forward that accommodates petitioners’ religious exercise while at the same time ensuring that women covered by petitioners’ health plans ‘receive full and equal health coverage, including contraceptive coverage.’”

Just as the Court’s order requesting supplemental briefing one week after oral argument was an unusual move by the Court, so too is today’s order.  The Supreme Court typically issues rulings of law, not orders for parties to attempt to settle their differences.

Nonetheless, today’s order is something to celebrate.  Not only did the Court refuse to give the Administration the total victory it was seeking, the Court vacated the rulings of the numerous lower courts that ruled in favor of the Administration.  Those courts held that the so-called “accommodation” scheme concocted by the Administration does not substantially burden the beliefs of religious organizations -- despite the fact that those organizations believe that the “accommodation” forces them to perform actions directly contrary to those beliefs.  Left undisturbed -- let alone affirmed by a Supreme Court decision -- those decisions would have been a terrible precedent for the future of religious liberty in this country.  Moreover, as we argued in our amicus brief submitted to the Court, a ruling against the Little Sisters would have been disastrous to religious nonprofits that supplement burdened government programs and thus play a critical role in helping those who cannot help themselves.  Religious groups should not have to pay annual financial penalties to the government just to act according to their religious beliefs.  Why can’t this Administration see that such money would be better spent helping those in need?

While the Court did not address the merits of the cases in todays’ order, including whether the HHS Mandate imposes a substantial burden on religious exercise, there can be no doubt that the Court is taking the religious and legal positions of these nonprofit organizations very seriously.  It was not willing to rule in favor of the Administration’s paltry understanding of what constitutes religious liberty, nor its restrictive reading of what the federal Religious Freedom Restoration Act requires.  Most importantly, the Court held that the Administration may not impose financial penalties on the Little Sisters and others until these cases are ultimately resolved.

Whether the Administration will agree to a compromise that does not force groups like the Little Sisters of the Poor to compromise their religious beliefs remains to be seen.  We will continue to monitor these cases as they go through additional rounds of briefing and argument in the lower courts and keep you posted.