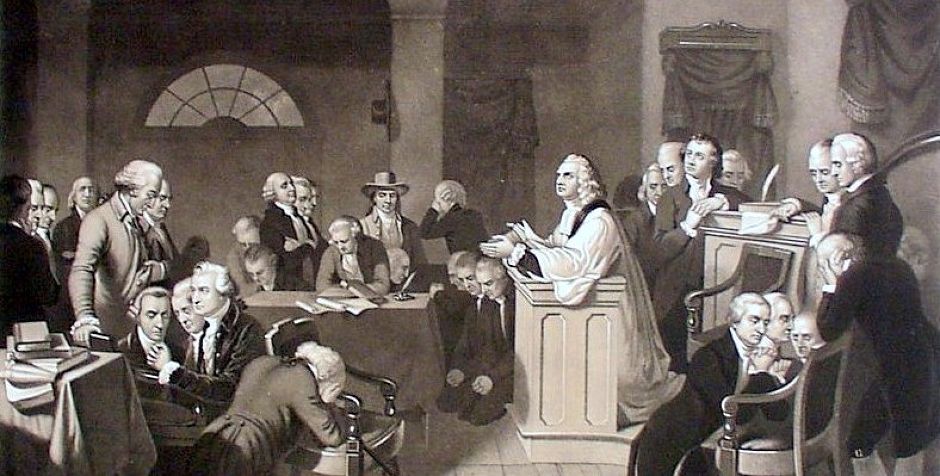 Celebrating the National Day of Prayer

Celebrating the National Day of Prayer

It is not often that a Supreme Court Justice uses a personal anecdote to illustrate a point in a written opinion.  Almost ten years ago, in McCreary County v. ACLU (a 5-4 decision holding that a public Ten Commandments display violated the Establishment Clause), that’s exactly how Justice Antonin Scalia opened his dissent:

On September 11, 2001, I was attending in Rome, Italy, an international conference of judges and lawyers, principally from Europe and the United States.  That night and the next morning virtually all of the participants watched, in their hotel rooms, the address to the Nation by the President of the United States concerning the murderous attacks upon the Twin Towers and the Pentagon, in which thousands of Americans had been killed.  The address ended, as Presidential addresses often do, with the prayer “God bless America.”  The next afternoon I was approached by one of the judges from a European country, who, after extending his profound condolences for my country’s loss, sadly observed: “How I wish that the Head of State of my country, at a similar time of national tragedy and distress, could conclude his address ‘God bless ____.’  It is of course absolutely forbidden.”

(You can listen to Justice Scalia’s powerful dissent from the bench here.)

Notwithstanding the Court’s flawed decision in McCreary County, Justice Scalia’s point remains a potent one: America has a unique and longstanding tradition of not just publicly acknowledging God, but invoking His name, seeking His blessings, and petitioning His providential care.  In fact, even before the birth of the nation on July 4, 1776, the Continental Congress declared in March of that year:

The Congress . . . [d]esirous . . . to have people of all ranks and degrees duly impressed with a solemn sense of God’s superintending providence, and of their duty, devoutly to rely, in all their lawful enterprises, on his aid and direction, do earnestly recommend, that Friday, the 17th day of May next, be observed by the said colonies as a day of humiliation, fasting, and prayer. . . .

Soon after the ratification of the Constitution, George Washington stated in his inaugural address to the First United States Congress:

[I]t would be peculiarly improper to omit in this first official act my fervent supplications to that Almighty Being who rules over the universe, who presides in the councils of nations, and whose providential aids can supply every human defect, that His benediction may consecrate to the liberties and happiness of the people of the United States a Government instituted by themselves for these essential purposes. . .

Washington’s supplications, and his Thanksgiving Proclamation of October 3, 1789, commenced a practice of presidential and congressional prayer proclamations that has endured for over two centuries. As the Supreme Court has observed, “Our history is replete with official references to the value and invocation of Divine guidance in deliberations and pronouncements of the Founding Fathers and contemporary leaders.”

The President shall issue each year a proclamation designating the first Thursday in May as a National Day of Prayer on which the people of the United States may turn to God in prayer and meditation at churches, in groups, and as individuals.

For commemorative events such as Memorial Day, Columbus Day, Flag Day, Patriot Day, Constitution Week, Mother’s Day, and so forth, federal law provides that the President is “requested” to issue a proclamation in honor of the event.  Not so for the National Day of Prayer.  For this event, the President “shall” issue such a proclamation.  Congress clearly believed -- and rightly so -- that the duty set forth in this statute is an essential one.  (For an exhaustive history of prayer proclamations, see here, an appendix to an ACLJ amicus brief filed in support of the National Day of Prayer.)

Any notion that the National Day of Prayer somehow violates the Establishment Clause -- as the Freedom from Religion Foundation continues to insist -- is absurd.  As the Supreme Court wrote last term, upholding prayers before monthly board meetings of a town in upstate New York:

The prayer opportunity in this case must be evaluated against the backdrop of historical practice.  As a practice that has long endured, legislative prayer has become part of our heritage and tradition, part of our expressive idiom, similar to the Pledge of Allegiance, inaugural prayer, or the recitation of “God save the United States and this honorable Court” at the opening of this Court’s sessions.

As Justice Scalia pointed out in his McCreary County dissent, the European model of church-state separation, where “religion is to be strictly excluded from the public forum . . . is not, and never was, the model adopted by America.”

Indeed, our founding document, the Declaration of Independence, speaks of God as the one who imparts to mankind a special identity and inherent dignity; as the one who endows persons with certain inalienable rights: life, liberty, and the pursuit of happiness.  In recognizing God as the source of these rights -- liberties that transcend politics, ideologies, and rulers -- it is only fitting that we as a nation continue to call upon Him to safeguard and preserve these rights.

Today, on this National Day of Prayer, let us do more than simply intellectually affirm these truths, let us act upon them.  Let us pray.