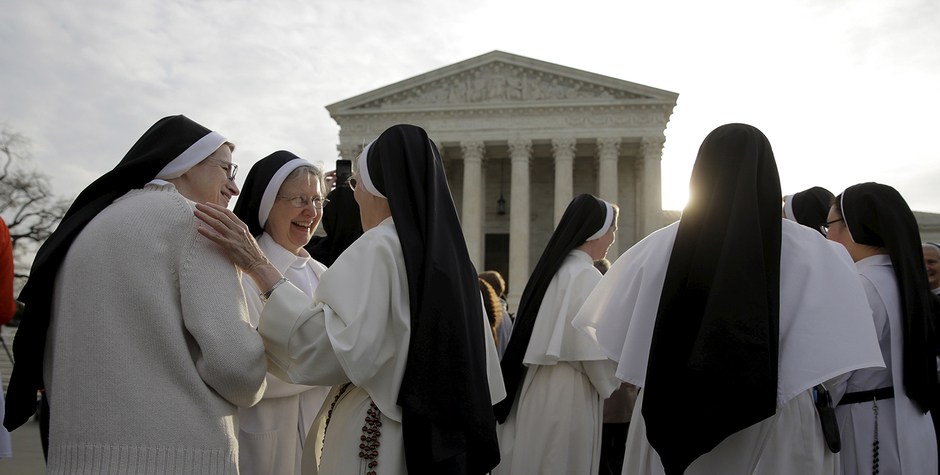 The First Amendment forbids the government from prohibiting the free exercise of religion.  The Religious Freedom Restoration Act, a federal law passed with overwhelming bipartisan support in 1993, precludes the government from substantially burdening religious freedom without satisfying the strictest of judicial scrutiny.  Our country, as the Supreme Court noted over forty years ago, has had “a happy tradition of avoiding unnecessary clashes with the dictates of conscience.”

Despite all this, and for nearly five years now, the Obama Administration has been aggressively pushing religious non-profit organizations to do something their religious conscience won’t allow: participate in a scheme, arrangement, or process by which they will facilitate the provision of abortion-inducing drugs to their employees.

The conscientious stance of these organizations shouldn’t come as a surprise to anyone, even though government officials seem to remain deaf, dumb, and blind to it.  For close to 1900 years, it has been a firm religious and moral teaching of the Christian tradition that abortion is wrong.  The Second Century document, the Didache, commonly called the “Teaching of the Twelve Apostles,” unequivocally forbids one to “murder a child by abortion or kill a new-born infant.”  This moral truth has endured to this day, even through reformations and divisions of the Christian Church.

Bureaucrats ensconced in their Washington, D.C. offices need only look out their windows on the anniversary of Roe v. Wade every January 22 to see how firmly committed religious organizations and citizens are to promoting the Gospel of Life -- and opposing government actions that would undermine it.  For them, the sanctity of human life is non-negotiable.

Nonetheless, even in the face of ongoing opposition and protests, not to mention interim orders by the Supreme Court granting certain religious organizations preliminary relief, the government has been unyielding in its desire that religious groups kowtow to the Administration’s Mandate through specious, so-called “accommodations.”

The government has never understood that not only do objecting organizations refuse to pay for abortion inducing drugs, they cannot, according to their conscience, take any steps that facilitates the use of such drugs.  As the Supreme Court correctly recognized in the Hobby Lobby decision, the issue of moral complicity “implicates a difficult and important question of religion and moral philosophy, namely, the circumstances under which it is wrong for a person to perform an act that is innocent in itself but that has the effect of enabling or facilitating the commission of an immoral act by another.”

Earlier this year, the Supreme Court decided Zubik v. Burwell, the case involving the Little Sisters of the Poor and other religious organizations opposed to the Mandate and the government’s alleged “accommodations” to complying with it.  As explained in more detail here, the Supreme Court vacated the decisions of the lower courts that ruled in favor of the government and invited the parties to try to resolve their differences.

Two months later, the Administration issued a “Request for Information,” asking for comments on how it might be able to accommodate the religious beliefs of objecting organizations while, at the same time, advancing its (unfounded and morally corrupt) interests in making abortion-inducing drugs available free of charge.

The ACLJ filed its comments today.

We argue that the Administration’s decision to treat religious non-profit organizations different than churches (which need not comply with the Mandate) is unfounded, unconstitutional, and illegal.  No federal law, including ObamaCare, gives bureaucrats at the Department of Health and Human Services the right to treat one type of religious association differently than another.  Why should a house of worship be exempt from complying with the Mandate, but not a congregation of Catholic nuns serving the elderly poor?  A church need not obey the Mandate even if it has no moral objections to abortion, but the Little Sisters of the Poor are not exempt, even though their religious position on abortion is resolute and longstanding.  The government has no business determining that some religious groups should be treated more kindly than others.

In addition, we argue that there are numerous ways the government can advance its abortion agenda without conscripting religious organizations into furthering that agenda.  The government can make abortion drugs and services directly available through Title X family planning centers.  It can allow employees of objecting organizations to enroll in health plans on the ACA exchanges that provide these services.  The government can also, as the Supreme Court itself suggested, place the burden of providing employees with abortifacients entirely on the insurance company (and the insurance company alone), without requiring the religious organization to do anything other than tell its carrier that it wants a health insurance policy free of such coverage.  Under this approach, the objecting organization has no legal obligation to provide abortifacient coverage, does not pay for the coverage, and is not “required to submit any separate notice to their insurer, to the Federal Government, or to their employees.”

How the Administration will respond in light of the comments it receives remains to be seen.  As we suggest in our comments, “now is the time for the government to put an end to years of needless litigation by doing what it should have done long ago: further the alleged government interests in a manner that does not require religious groups to violate their religious beliefs.”

In other words, now is the time for the Administration -- at long last -- to do the right thing.