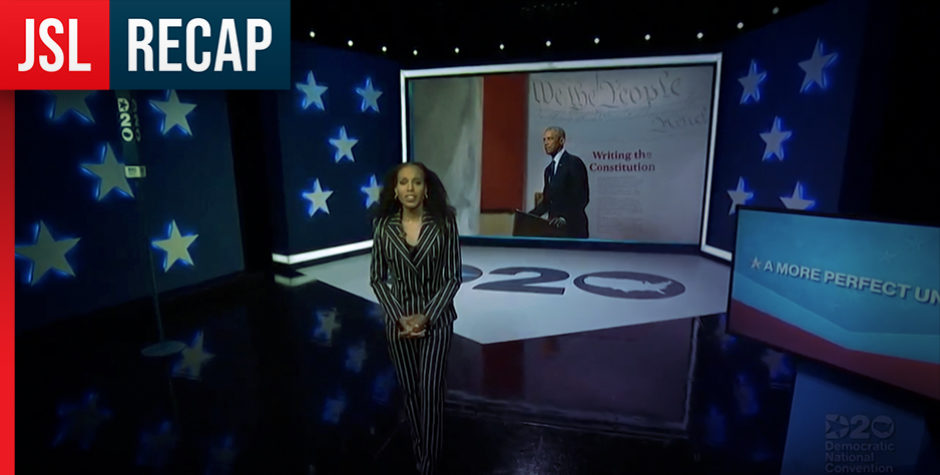 What was the DNC thinking having a former President overshadow their Vice Presidential pick?

Today on Jay Sekulow Live, we discussed Night 3 of the DNC, and how based on the broadcast, you’d almost think former President Barack Obama was the one running for Vice President. He seemed to be the only person the mainstream media could talked about after the broadcast.

As my dad Jay Sekulow pointed out:

They (the media) said it was Barack Obama’s night. Except it was the nomination of the first African-American, well she’s both South Asian and black, so it’s a very historic moment with Kamala Harris. And everybody wanted to talk about – or the media certainly wanted to talk about – Barack Obama’s speech, which was a very professorial lecture about why he doesn’t agree with the President.

Honestly last night was supposed to officially introduce Kamala Harris as the Vice Presidential nominee, an important role and one that deserves attention regardless of political party. But the media just kept saying we’ll get to Harris, we’ll get to Harris.

Who on earth thought it would be a good idea to have Barack Obama speak on the same night as the new Vice Presidential candidate? If you were the next Republican nominee, would you want Donald Trump speaking right before you? He would get all the media attention. No one would be talking about what you had to say.

As I said on the show, I don’t agree with Kamala Harris on much of anything, but she’s a much better opponent and a much better speaker than the DNC allowed her to be last night. She’s a former California Attorney General. She’s tough. She’s smart. Whoever wrote her speech did her no favors.

And aside from the media fawning all over him, President Obama’s speech was no knockout. He essentially just complained about President Trump. I’m sure he is upset with President Trump. A number of former Obama Administration officials are currently under investigation by a U.S. Attorney. And we found out he was in on the hoax, along with Joe Biden. So it’s no wonder Barack Obama is upset with our President right now. He’s lashing out to salvage his broken legacy.

President Obama actually said we need a “serious President.” Remember he is the President who accepted the Nobel Peace Prize ahead of his Iran nuclear deal, only for Iran to continue developing its nuclear weapons program.

Meanwhile in the midst of the campaign and a pandemic and everything else going on right now, President Trump brokered the Abraham Accords – a historic peace deal between the United Arab Emirates and Israel.

This was really bad planning on the DNC’s part. If anything, they should have had President Obama speak on Monday, the same night Michelle Obama spoke. That would have been huge. And it would have cost Harris nothing. Instead, even after Kamala Harris gave her acceptance speech, all the mainstream media talked about – and in some cases cried about – was Barack Obama’s “powerful” speech.

Regardless of how you feel about Kamala Harris and what kind of VP she might make, this should have been her night. But you sure would not have gotten that impression last night. It should be very interesting to see how they end the event tonight.

The full broadcast includes much more analysis of this latest installment of the DNC and the speeches by Barack Obama and Kamala Harris.

By Richard A. Grenell, Senior Advisor for National Security and Foreign Policy1613771088688

Unfortunately, it is impeachment week and the political theater has begun. Today on Sekulow , we discussed the impending impeachment trial of President Donald Trump which begins tomorrow and that we are delivering the ACLJ’s legal analysis on the unconstitutionality of the trial to the Senate...