Over the last several years, many state legislatures around the nation have taken important steps towards upholding their mandates to protect the most vulnerable of their citizenry.  Sixteen states have passed laws that ban abortions at the point at which the unborn baby with a heartbeat can feel pain. This legislation should be neither morally, ethically, nor scientifically controversial.  Protecting pain-capable human beings from torture and death is a fundamental human right that legislators are obligated to protect.

The science that undergirds these pain-capable abortion bans is well established.

Pain receptors are present throughout the baby’s entire body by no later than 20 weeks after fertilization and nerves link these receptors to the brain’s thalamus.

By 8 weeks, the unborn baby reacts to stimulus or touch. By 20 weeks, the baby recoils if the stimulus would be painful if applied to an adult human. Science has shown that such painful stimuli increases the baby’s stress hormones and is associated with long-term harmful neurodevelopmental effects. This is why, when undergoing in utero surgery, anesthesia is given to the unborn baby.

As we learn more about human development from advancing science, it only makes sense that more Americans would want to stop these abortions from taking place. Here is a map of states where such pain-capable abortion bans have been passed as of February 2017, which ones have been blocked by courts, and which states still need to ensure the protection of these vulnerable children. 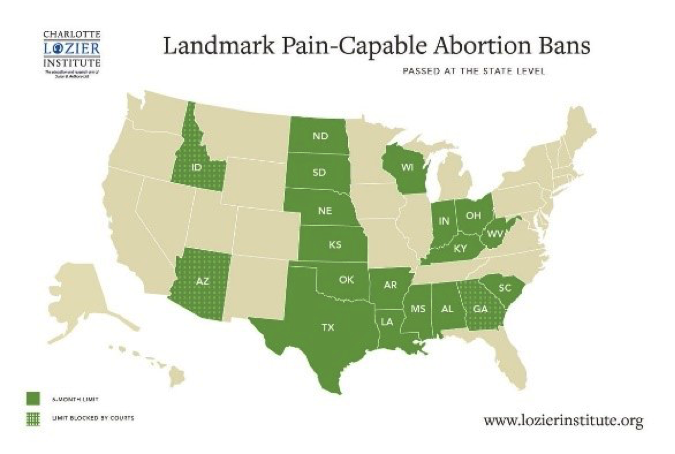 However, the pro-abortion lobby is now aggressively attacking these laws. For example, in Tennessee, the ACLU just teamed up with Planned Parenthood and others to attack a pain-capable abortion bill there, claiming the bill was “cruel” and “chipped away” at women’s rights. Given the nature of what these bills protect, such attacks are ironic. Cruelty is subjecting an unconsenting, innocent human being to be tortured and killed in the safety of her mother’s womb.

Our pro-life legal team at the ACLJ has been advocating and defending these bills for years. Prompted by the recent attacks by the pro-abortion lobby, we just launched a brand-new advocacy campaign to defend these laws and work to ensure such protections for unborn children exist from coast-to-coast.

We can win these cases. Even though radical pro-abortion protestors shut down the Texas legislature, a 20-week abortion ban was still passed in special legislative session and not even challenged in the courts. One of our senior attorneys recently testified in Maryland on the 20-week ban moving through the state legislature there.

This should be easy. This shouldn’t be controversial.