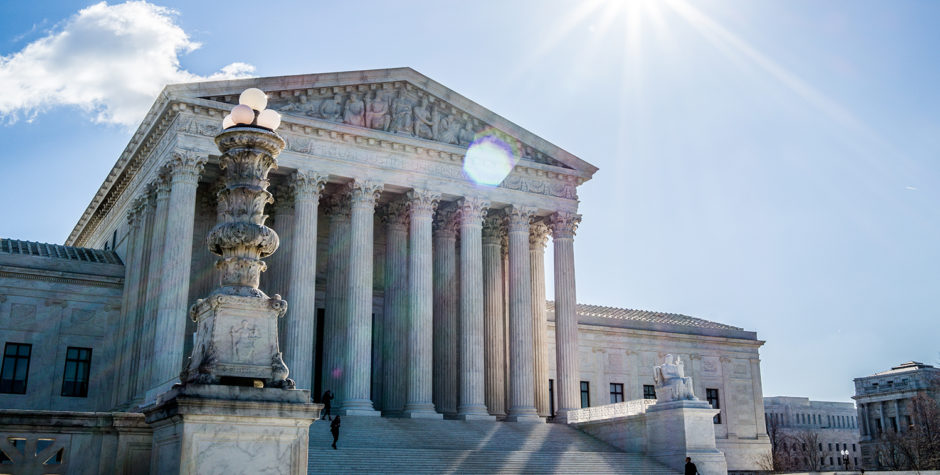 The signs were encouraging at the Supreme Court oral argument in the pro-life pregnancy center case of NIFLA v. Becerra. At issue is the constitutionality, under the free speech guarantee of the First Amendment, of a California statute which requires two things: first, that licensed pro-life centers advertise the availability of free and low-cost abortions; and second, that unlicensed pro-life centers include in any written ad, and in the same size font (or larger) as the ad text itself, a 29-word disclaimer (saying they are not licensed and have no licensed professional providing or supervising their services).

As we’ve previously explained, we represent licensed pro-life pregnancy centers who filed a federal constitutional challenge to this law. Other licensed and unlicensed pro-life centers challenged the law as well. After the federal district and appeals courts rejected the various challenges, the Supreme Court agreed to hear one of the cases, NIFLA v. Becerra, while putting the other challenges (ours and two others) on hold. The ACLJ then filed a friend-of-the-court brief supporting NIFLA's case, and we helped NIFLA's attorney, long-time ally Michael Farris, the head attorney at Alliance Defending Freedom, prepare for his Supreme Court oral argument.

The oral argument went very well. At argument (which I attended), the Supreme Court Justices seemed clearly to grasp the deeply problematic nature of California's statute compelling pro-abortion speech. Regarding the compelled disclaimer requirement, in which a two-word ad (e.g., "Choose Life") would be drowned out by a 29-word disclaimer printed in the same or larger size, Justice Kennedy declared (p. 23) that "it seems to me that that means that this is an undue burden . . . and that should suffice to invalidate the statute." Justice Sotomayor (p. 62) labeled the same requirement "burdensome and wrong." Justice Ginsburg added (p. 57) that since California requires the disclaimer in many counties to be printed in multiple languages, this "can be very burdensome."

Also troubling the Justices was the fact that the law targets pro-life centers. Justice Kagan (pp. 37-38) said the statute appeared "gerrymandered," and asked (p. 42) "[W]hat was the state thinking" when it cobbled together a collection of exemptions the way it did. She wondered (pp. 44, 46-47) if the state was targeting "a particular kind of a center" as presenting "a terrible problem." Meanwhile, Justice Alito (p. 41) said there was a "suspicious pattern" in the way the statute seemed to exempt everyone except free pro-life pregnancy centers. The attorney for California even admitted (p. 43) that the statute was "targeted at free clinics."

Another recurrent theme in the questioning was whether the same free speech rules would apply to abortion providers. That is, if it violates the First Amendment to require pro-life centers to highlight abortion as an alternative, does it also violate the First Amendment to require abortion providers to present childbirth and adoption as alternatives? Attorney Farris emphasized that the Supreme Court has already approved states requiring abortion providers to alert women to alternatives. This is because abortion is (among other things) a medical procedure, and discussion of alternatives is a basic part of obtaining informed consent. In the California case, by contrast, the state is imposing a blanket requirement, not on those providing a particular procedure, but on all pro-life pregnancy centers simply talking about pregnancy, childbirth, and adoption. That kind of blanket compelled speech, Farris argued, violated the constitutional right not to be coerced to say things one finds objectionable.

Here at the ACLJ, we heartily agree that this California law violates the First Amendment. Indeed, it is hard to imagine a worse offense against the right to free speech than forcing someone who is pro-life to post a message that points women toward abortion.

We’ve taken on numerous federal lawsuits, defending pro-life pregnancy centers all across America, to prevent exactly this kind of forced pro-abortion speech. We will not back down.

We hope and pray that the encouraging signs at the oral argument translate into a strong free speech victory for pro-life pregnancy centers in June.