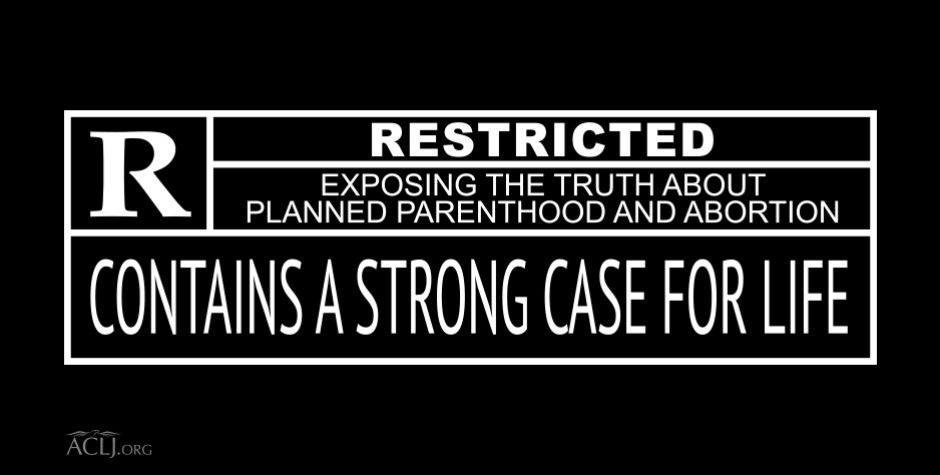 “Unplanned,” a pro-life movie based on the true story of former Planned Parenthood clinic director Abby Johnson, is set to be released in theaters on March 29, 2019, and it just received an “R”-rating for “violence” because it contains “some disturbing/bloody images.”

According to the rating rules, a motion picture receives an R-rating when it includes “adult themes, adult activity, hard language, intense or persistent violence, sexually-oriented nudity, [and] drug abuse . . . .” Also according to the rules, adult activity is activity in which a minor is not legally allowed to engage. “Unplanned” does not include any nudity, drugs, sex, or profanity, which means that this particular R-rating is for violence.

So let’s get this straight – there are 11 states in which an underage girl can get an abortion without parental consent, but every underage girl wanting to go see this pro-life Christian movie has to have an “accompanying parent or guardian” – not just consent, but accompaniment!

Abortion is violent. It is bloody, and it is disturbing; it’s the killing of an innocent unborn baby. Parents should be involved and engaged in this issue.

The hypocrisy of anti-life advocates is also disturbing. It’s disturbing that pro-abortion supporters want to make it legal in all 50 states for underage girls to kill their unborn babies without the consent, or involvement, of their parents. It’s disturbing that anti-life activists tell young children that having an abortion is like an unpleasant dentist appointment. Last time I checked, going to the dentist might be bloody, but it sure wouldn’t receive an R-rating for being depicted in a movie.

Thus, a (most likely unintended) consequence of this R-rating, is the acknowledgement of something we all know to be true – that abortion is the taking of a human life, and its process and aftermath is violent, disturbing, and not for children.

In light of New York’s recent celebration of a law that allows babies to be aborted up until the moment of birth, and the comments by Virginia’s governor advocating infanticide, now is the perfect time to point out the logical fallacies of R-ratings depicting the very actions that are being celebrated and applauded. If abortion were truly a good thing, why would we have to shield our children from its reality? If abortions were really merely women’s healthcare, why is that healthcare considered “violent”? And shouldn’t we be worried about such violence against women? If these were truly not children being aborted in their mother’s wombs – if they really were just clumps of cells, why would the depiction of their demise disturb us?

Our children should be shielded from the death and destruction of other children. We should be deeply disturbed when babies are killed, in reality and in a motion picture. We should mourn their deaths, and we should teach our children to value life.

That is why we at the ACLJ will continue to do everything in our power to fight for the protection and right to life of those innocent babies until purposefully killing them becomes unthinkable and illegal.

Join with us in that fight. Sign our petition today.