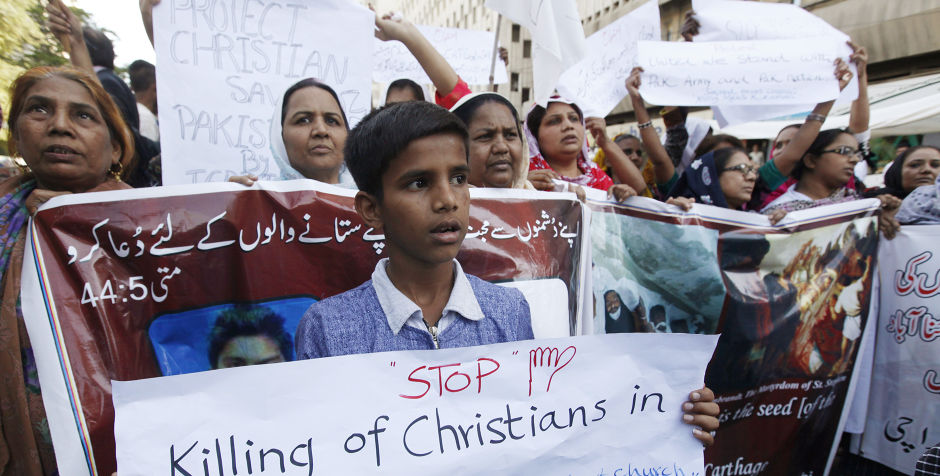 The United States Department of State has recently published its annual International Religious Freedom (IRF) report. This report describes the status of religious freedom in every country. It covers government policies that violate religious freedom as well as the persecution of minorities by private individuals. The State Department submits these reports to Congress in accordance with the International Religious Freedom Act of 1998.

Detailing the many abuses of religious freedom in its section on Pakistan, the IRF report states that in 2014:

Government policies did not afford equal protection to members of majority and minority religious groups, and due to discriminatory legislation, minorities often were afraid to profess freely their religious beliefs. Media and nongovernmental organizations (NGOs) reported killings of religious minorities by police. . . . The government’s general failure to investigate, arrest, or prosecute those responsible for societal abuses promoted an environment of impunity that fostered intolerance and acts of violence . . . . In numerous cases during the year, authorities failed to protect victims of religiously motivated mob violence.

Organization for Legal Aid (OLA), European Centre for Law and Justice’s (ECLJ) affiliate in Pakistan, provides legal aid to the persecuted church. Our attorneys in Pakistan deal on a regular basis with the kind of cases and situations that are detailed in the IRF report. Mob violence against religious minorities, discrimination against and persecution of Christians, false accusations of blasphemy, etc., are just a few examples of the wide range of cases that our attorneys handle in Pakistan.

The IRF report specifically highlights religiously motivated violence by the Sunni majority against Christian, Hindu, Shia, and Ahmadi minorities. One horrific example of mob violence occurred on March 28th, when a group of more than 3,000 Muslims burned 100 Christian homes in Lahore’s Joseph Colony because a Christian from the area, not present at the time of the attack, was charged with blasphemy. Another attack occurred on November 4th of last year, in Kot Radha Kishan, Punjab, when a mob of around 1,500 villagers burned alive a Christian couple after they were accused of blasphemy.

Sadly, these occurrences are not rare and no minority is safe from violence. According to a public database of attacks on Shias in Sindh, 139 people were killed and 49 injured in 141 separate attacks during the year. On another occasion, the Ahmadiyya community (referred to as heretics by the Sunni majority) reported that aggressors killed 10 Ahmadis for their faith. The sad reality is that minorities across the spectrum are being persecuted because of their faith by the Sunni Muslim majority.

The IRF report also states that, according to Pakistani organizations, hatred against religious minorities is taught in public school curricula in the form of derogatory and inflammatory statements about Ahmadis, Hindus, Jews, and Christians.

Furthermore, the IRF report expresses serious concern over Pakistan’s blasphemy laws. While most people know about Asia Bibi’s case (this Christian mother of five is on death row in Pakistan because of her Christian faith), it is sadly not the only one. Just last year, police registered twelve new cases under blasphemy laws and in those cases, the court sentenced three individuals to death, six to life in prison, and three to two-years of imprisonment. “Ahmadiyya community leaders expressed continued concern over authorities’ targeting and harassment of Ahmadis for blasphemy, violations of ‘anti-Ahmadi laws,’ or other crimes.” According to the IRF report, “religious minorities were disproportionately accused of blasphemy relative to their small population in Pakistan.” The report also states that, “observers noted individuals frequently initiated blasphemy complaints against neighbors, peers, or business associates to settle personal grievances or to intimidate vulnerable people. While the law required a senior police official to investigate any blasphemy charge before a complaint was filed, police did not uniformly conduct this procedure.”

The IRF report does note some positive outcomes from the past year. One positive step was taken by the Supreme Court of Pakistan when it

directed the federal government to establish a task force to ensure the safety and protection of minorities in the country, develop a strategy for promoting religious tolerance, and evaluate school curricula to promote a culture of religious and social tolerance. The court also directed the federal government to take steps to discourage hate speech in social media and bring accused violators to justice under the law.

Another positive outcome occurred in the case of the aforementioned murdered Christian couple. “According to press reports, police arrested 59 suspects and filed cases against 468 others. . . . On December 16, the Supreme Court . . . ordered action against police who were present when the attack occurred for negligence.”

While we applaud the reported progress being made to protect religious minorities, there is still much that can and should be done to create a fair system. Fortunately, our attorneys with the OLA are on the front lines when it comes to defending the persecuted minorities within Pakistan.

The OLA is currently representing a Christian man, Allah Ditta Masih, who was beaten and shot three times by radical Muslims when he tried to stop Muslim men from harassing Christian women on their way to church on Sundays. The OLA is also in the process of defending Ranjha Masih and his son Jalal, two Christians who have been falsely accused of defiling verses of the Quran and disturbing Muslims’ graves. In 2013, our team successfully represented a Christian pastor who was accused of blasphemy. The pastor was acquitted by a trial court.

In another case, the OLA filed a habeas corpus petition (the legal method for seeking release of an unlawfully detained person) in a Pakistani court on behalf of our client Mumtaz Masih. Our petition succeeded resulting in our client’s freedom from slavery like conditions, and a major victory for religious freedom. These are but a few of many cases currently being handled by our team in Pakistan. The OLA has also strongly encouraged Pakistan’s government to properly follow Pakistani laws currently in place to protect religious minorities. The system is far from perfect, but a thousand mile journey begins with a single step.