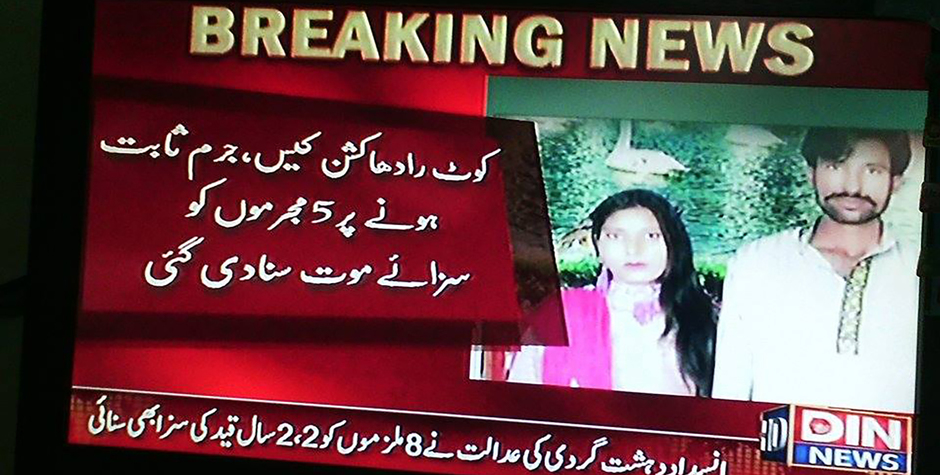 We have received news from our office in Pakistan that an anti-terrorism court in Pakistan has convicted and sentenced thirteen extremist Muslims for horrifically burning a Christian family to death. This is a major victory and a rare instance where Pakistani Muslims are brought to justice for the atrocious persecution of Christians.

About two years ago, in November 2014, a Muslim mob burned to death Shahzad (husband) and Shama (wife) after accusing them of desecrating Quranic text. Shama was pregnant with their fourth child at the time.

As we reported in 2014, Shahzad, his wife, and parents worked at the brick kiln of Yousaf Gujjar for about thirteen years. On November 3, 2014, while cleaning her house, Shama found some papers that belonged to her father-in-law who had died a week prior to the incident. She gathered all those papers; some of the papers were printed in Arabic. Shama was illiterate and did not know whether those papers contained anything of religious nature. She burnt all of them together (a common way of disposing of papers).

Her Muslim neighbors saw her burning the papers. They informed the brick kiln owner’s son that Shama had burnt the Quran. The owner’s son called Shama and Shahzad to his office, locked them inside, and beat them.

A local fruit vendor found out about this and told the Imam of the mosque. The Imam then sent out a message to the adjacent villages’ mosques and announced at his own mosque that a Christian had burnt the Quran. About six or seven villages received the news and the call to attack the couple.

On November 4, 2014, at about 6:30 a.m., an enraged mob of about four thousand Muslims gathered. They attacked the office where the couple was detained. The mob beat the couple and then threw them in the burning kiln.

While the couple was on fire, the mob chanted slogans of “Allah-o-Akbar” (Allah is great). The mob remained there until the couple was completely burnt to death.

Today, staff at the Organization for Legal Aid (OLA), office of our affiliate, European Centre for Law and Justice (ECLJ), saw the breaking news of the convictions and informed us about it. The court sentenced five members of the extremist mob to the death penalty and also sentenced eight others to two years in prison. According to a Pakistani daily, the Dawn, the five defendants who were sentenced to death are: Mehdi Khan, Riaz Kambo, Irfan Shakoor, Muhammad Hanif, and Hafiz Ishtiaq (Imam of the mosque). The eight men who received two years imprisonment are: Muhammad Hussain, Noorul Hasan, Muhammad Arsalan, Muhammad Haris, Muhammad Muneer, Muhammad Ramazan, Irfan, and Hafiz Shahid.

We are trying to obtain copies of the court judgment and will have more details about the convictions soon.

This is a good development in a country where religious minorities are persecuted on a daily basis. Generally, the path to justice for Pakistani Christians is very difficult, if justice is ever served at all. Asia Bibi, Christian victim of Pakistan’s blasphemy laws, has been on death row for about six years and is awaiting her appeal hearing at the Supreme Court. We hope that the convictions in Shahzad and Shama’s case would send a strong message to Muslim extremists and would deter future attacks on minorities. This case proves that all is not lost for Christians in Pakistan, but there is much work to do.