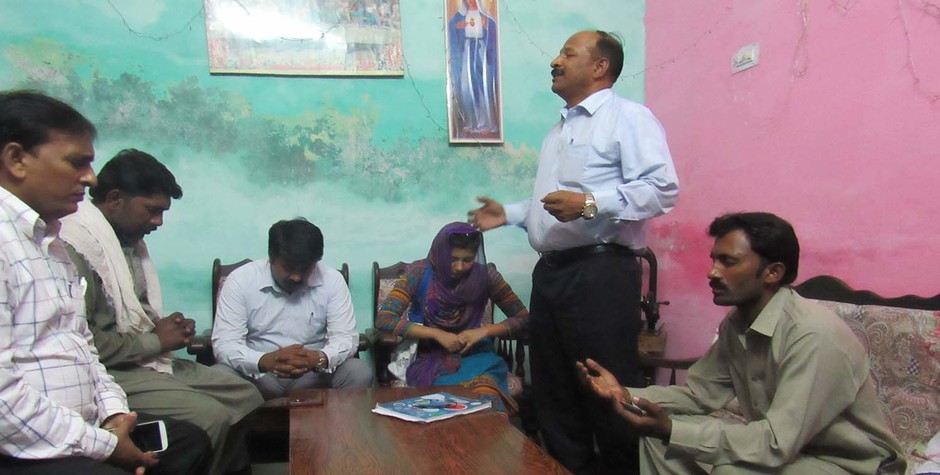 False blasphemy allegations in Pakistan often have devastating results, but we’re happy to report that one Christian family was spared what so many others are not.

Our international affiliate the European Center for Law and Justice’s (ECLJ) office in Pakistan, the Organization for Legal Aid (OLA), received a report concerning a Christian woman, Sonia Gill, who was accused of blasphemy. The OLA sent a team to investigate the facts and determine if any assistance was needed.

When our team arrived, they were able to determine that Sonia was falsely accused of blasphemy because a poster in her home allegedly insulted Muslims. Upon arrival, our team saw that the poster was non-religious. In fact, it was a political poster from a recent election that contained names and pictures of politicians and lacked anything that could be misconstrued as religiously insulting. Our team then spoke with Sonia to gather additional details related to the case.

Sonia told our team that one day her Muslim neighbor, Poma, who stitches clothes for living, came to her house to inform the family that their children’s clothes were ready to be picked up. Upon entering Sonia’s house, Poma saw the disputed poster on the floor and accused Sonia of committing blasphemy. Sonia said the real reason she was accused was because three years ago Poma’s sister-in-law eloped with Sonia’s Christian cousin. A relationship between a Christian man and a Muslim woman is seen as incredibly dishonorable for the Muslim family and is usually dealt with in kind. The OLA represented a Christian family in a similar case when an 8-year-old Christian girl was stripped and beaten because her uncle was dating a Muslim woman.

Sonia told our team that Poma left and told fellow Muslims that Sonia had committed blasphemy. That afternoon, roughly 80 angry Muslims gathered outside Sonia’s house, demanding to see the poster. Sonia’s brother, Shaukat Gill, invited a few individuals from the mob inside his house to inspect the poster. They saw the poster but left undecided to further discuss the issue at a local Mosque. Soon thereafter, police arrived at the scene to get an account of what had transpired and to determine whether the poster was offensive. After checking the house and interrogating Sonia, the police determined that she had done nothing wrong and was innocent. Despite the police’s response, the clerics and the mob were not yet convinced.

The next day Sonia received word from Christian girls that they had heard of another mob forming to teach her a lesson. Sonia explained that, “several Christians and Muslims suggested that I should flee, but I said that if I did, angry protestors would harm other Christians and their property. Whatever they want to do, they should do it to me and not to others.”  Despite the imminent danger, Sonia stood her ground and refused to leave.

Fortunately, in this case, several Christians and Muslims, with the help of local law enforcement officials, decided to discuss the details of the situation. After the meeting, the cleric of Gulzar-e-Madina Mosque, who had earlier filed a complaint against Sonia with the local police accusing her of blasphemy, said that he investigated the matter and no occurrence of blasphemy could be found. He further stated that he did not seek any legal action in this matter.

A few years ago, the OLA represented Pastor Karma Patras in a similar situation in which the parties discussed whether the speech under question was blasphemous or not. After having been accused of blasphemy, Patras was pursued by a mob demanding that he be handed over to them. Fortunately, the man who lodged the complaint was willing to discuss it. After the man understood that no blasphemy had occurred, he agreed to testify that he had been mistaken. Pastor Patras was acquitted of the charges.

While Pakistan’s blasphemy laws have destroyed numerous innocent lives and they need to be repealed, cases like Sonia’s and Pastor Patras’ show that Christians and Muslims can come together as a community to amicably resolve such matters without resorting to violence.