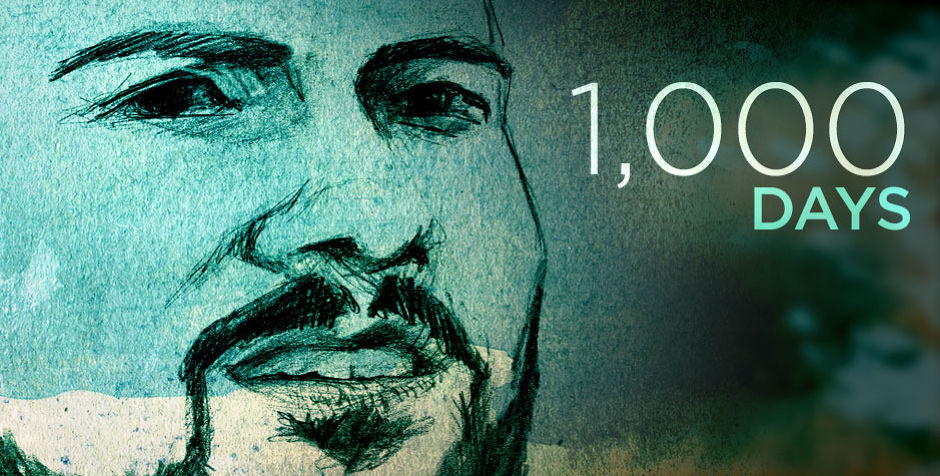 One Thousand Days in Chains for Christ

One thousand days ago, Iran’s Revolutionary Guard raided the home of American Pastor Saeed Abedini’s parents in Tehran. They forcefully dragged Pastor Saeed off to prison because he is a Christian.

A few months before, he had been placed on house arrest when the Revolutionary Guard pulled him off a bus just days before he was to leave Iran and return home to his wife and two young children in the United States. He had been in Iran building a government approved nonsectarian orphanage for children in need.

When he was dragged away from his parents’ home, 1,000 days ago, he disappeared. His family didn’t know where he was for days. For weeks, he sat in solitary confinement in one of the world’s most dangerous prisons.

For months, the U.S. government remained silent as a U.S. citizen sat tormented and threatened, stripped of his fundamental human rights.

Eventually, Members of Congress spoke out, joined by the U.S. Commission on International Religious Freedom and then the State Department and even the White House.

But 1,000 days have passed and Pastor Saeed is still in chains for Christ.

1,000 days and Pastor Saeed is still being denied the medical treatment he needs.

1,000 days and Pastor Saeed is still being beaten and threatened worse things will happen if he doesn’t recant his faith in Jesus Christ and become Muslim.

1,000 days and Pastor Saeed is still separated from his wife and children here in America.

Pastor Saeed’s wife, Naghmeh, feels the pain of every day more than anyone else, stating:

“One thousand days without Saeed has really become a lifetime for us. My children continue to ask when Daddy is coming home. I no longer know what to tell them. While our faith keeps us going and continues to give us strength, we need Saeed to be returned to our family. We miss him terribly. His immediate return is the only thing that can mend our broken hearts.”

The Obama Administration has left Pastor Saeed on the sidelines of nuclear negotiations with Iran and in prison, waiting, praying, hoping, and continually trusting in Jesus Christ.

Enough is enough. It is time for the Obama Administration to do whatever it takes to bring our fellow American home.

The Administration is sitting across the table from Iran in the final days of the nuclear negotiations before the stated deadline in one week. Now is the time to bring him home.

It’s been 1,000 days. Not another one should go by. Pastor Saeed should be freed and allowed to return home to his family and receive the medical treatment he so desperately needs.

The world is speaking out. Congress has unanimously spoken out for Pastor Saeed’s freedom.

Over 1,000,000 of you have signed our petition demanding Pastor Saeed’s freedom.

At the ACLJ, we continue to meet with the White House, the State Department, Congress, the United Nations, and leaders around the world. We’re aggressively fighting to pressure Iran to free this innocent U.S. citizen, in chains for the Gospel of Christ.

Our message is clear.

It’s time for Pastor Saeed to come home to his family in America – the nation he calls home.

It’s time our nation does whatever it takes to make that happen.