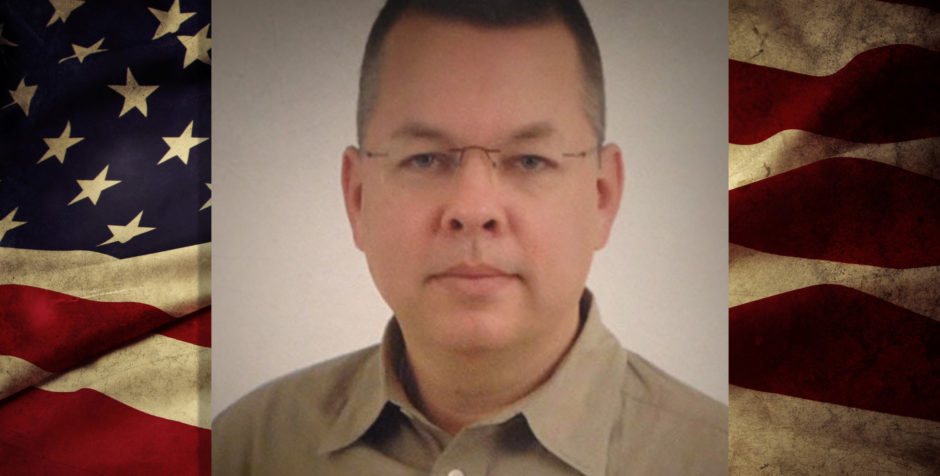 It’s intolerable. We told you the trial of imprisoned American Pastor Andrew Brunson has been nothing but a complete and utter sham. We’re taking action.

“Secret witnesses”, unjustified trial delays, and now the Turkish judges have basically barred any witnesses for Pastor Andrew’s defense. This pretense of justice has gone on long enough.

We’ve just delivered a critical legal submission to the U.N. Human Rights Council on behalf of Pastor Andrew. We need maximum pressure on Turkey, and we need the whole world to stand up and act with us.

Our legal submission provides a detailed summary of the infuriating plight of Pastor Andrew, beginning in 2016 when he was first detained.

For 23 years, Pastor Brunson worked openly in Izmir, Turkey, serving as the pastor of the Izmir Resurrection Church, within a small Protestant Christian community. On 7 October 2016, Pastor Brunson received a written summons to report with his passport to a local police station. Believing the summons was related to his routine renewal of his residence visa, Pastor Brunson promptly reported to the Izmir police only to be arrested, and later told that he was to be deported as a ‘national security risk’. However, Pastor Brunson was never deported, he was instead transferred to the Harmandali Detention Centre and held for 63 days. During this time, he was denied access to an attorney and repeated requests by U.S. officials to visit Pastor Brunson were ignored, raising serious concerns.

On 9 December, 2016, he was transferred to a prison facility as a suspect of alleged ‘membership in an armed terrorist organization,’ despite no evidence to justify the accusations against him. Turkey repeatedly denied Pastor Brunson’s appeals for release, and, rather than accelerating his trial as Turkey’s Prime Minister indicated they would in March 2017, no indictment was handed down until March 2018. The indictment against Pastor Brunson was 62 pages long, wholly lacking in merit, and provided no evidence regarding criminal action against Pastor Brunson, but was rather replete with hearsay from secret witnesses.

On 16 April 2018, eighteen months after his imprisonment, Pastor Brunson’s trial began. The first day lasted thirteen hours and was filled with video testimony of secret prosecution witnesses whose appearances and voices were disguised almost to the point of their testimony being indecipherable. At the conclusion of the first day, the 3-judge panel of Turkish judges refused to release Pastor Brunson and ordered that he be returned to the overcrowded prison where he was originally imprisoned. The judges also delayed the trial further by scheduling the next court date for three weeks later on 7 May 2018.

On May 7, Pastor Brunson’s second day of trial lasted eleven hours, and again involved only prosecution witness testimony. Two of the seven witnesses brought by the prosecution were secret, and none of the seven witnesses testified that they had personally seen or heard Pastor Brunson do anything that would substantiate the charges against him. Their testimony was completely hearsay and conjecture. Pastor Brunson’s Turkish attorney objected to the testimony of one of the witnesses against Pastor Brunson by pointing out that the witness had been convicted on 14 separate counts of fraud; however, the lead judge claimed that fact was not relevant and stated that the prosecution witnesses’ statements would be taken as fact. Moreover, the lead judge has refused to allow any of the witnesses for the defence testify. According to the judge, no witness who is a suspect is allowed to testify, and he declared that the remaining witnesses have nothing relevant to say.

As we point out to the U.N., the judges’ actions violate numerous international laws, treaties, and human rights obligations:

These actions violate Articles 9 (right to liberty and security of person), 14 (equality before the courts and tribunals), and 18 (right to freedom of thought, conscience and religion), of the International Covenant on Civil and Political Rights (ICCPR) to which Turkey is a signatory, as well as Articles 7 (equality before the law and equal protection of the law), 9 (no arbitrary arrest or detention), 10 (fair and public hearing), and 11 (presumed innocent until proved guilty) of the Universal Declaration of Human Rights (UDHR), and Article 5 (right to liberty and security of person & lawfulness of detention), and 6 (adequate time and facilities for the preparation of his defence) of the European Convention for the Protection of Human Rights and Fundamental Freedoms (ECHR).

Additionally, Articles 10 and 24 of the Constitution of the Republic of Turkey protect the rights of everyone to equality before the law ‘without distinction as to . . . political opinion, philosophical belief, religion and sect’, as do Articles 2 and 7 of the UDHR and Article 18 of the ICCPR. These rights include the freedom, ‘either individually or in community with others and in public or private, to manifest his religion or belief in worship, observance, practice and teaching’. Article 5 of the ECHR guarantees that no one shall be arbitrarily ‘deprived of his liberty’. Article 36 of Turkey’s Constitution also protects the right to litigation ‘before the courts through lawful means and procedure.’ Turkey has violated all of these protections by arresting and detaining an innocent pastor in prison for over a year and a half based on the hearsay testimony of secret witnesses. Moreover, Turkey has denied Pastor Brunson the opportunity to mount an adequate defence by flippantly dismissing all defence witness testimony.

Pastor Andrew is innocent. He has cooperated with authorities over the past 19 months despite the ongoing violations of his human rights. No real evidence has been presented against him. Turkey is holding him as a political pawn. Their game must end NOW.

His next day of trial is not until July 18th, but we can’t wait until then. We’re taking action now. Add your name to the list of over a half-million supporters who demand his freedom.